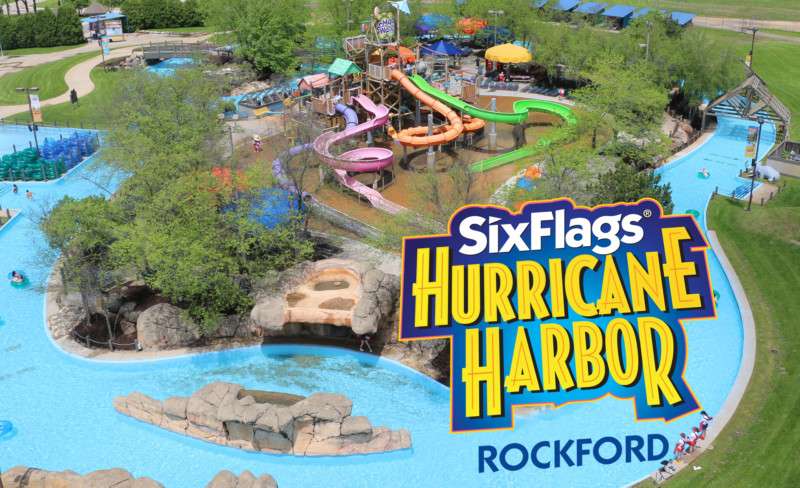 August 29, 2019 — Six Flags Entertainment Corporation today announced an expansive lineup of innovative roller coasters, family rides, waterslides and thrilling attractions for the 2020 season. The company is also adding the Hurricane Harbor name to three more of its waterparks as it makes massive renovations to provide a signature Six Flags experience.

“This is our biggest and most diverse lineup in the company’s history, featuring world-class thrills for the entire family including high-tech waterslides utilizing futuristic, AquaLucent technology, record-breaking roller coasters, and first-in-the-industry family attractions. Six Flags is committed to delivering remarkable experiences in every park, every year,” said Six Flags Chairman, President and CEO Jim Reid-Anderson. “Additionally, three of our newest waterparks—Magic Waters, White Water Bay and Darien Lake’s Splashtown—will be rebranded to Six Flags Hurricane Harbors in 2020 as we make major investments in these properties with impressive, new water attractions and extensive upgrades, giving our Members and Season Pass Holders even more value and more reasons to visit our incredible portfolio of parks.”

Six Flags is unveiling an unparalleled roster of exciting new offerings for the 2020 season:

Six Flags Over Georgia, the Thrill Capital of the South—introduces two devious villain attractions in the all-new Gotham City. Thrill-seekers will spin wildly on Catwoman Whip while suspended from her twirling wheel of chaos. Riders are raised by a giant arm, feet dangling, and are launched into a high-speed spin…round and round…seven stories toward the sky. Also new for 2020, Poison Ivy Toxic Twister will send riders through a classic scramble that puts a new twist on spinning.

Six Flags Great America, the Thrill Capital of the Midwest, continues its record-breaking streak in 2020 with the world-record water coaster, Tsunami Surge. Towering an incredible 86 feet in height, this innovative water coaster will be the tallest-of-its-kind in the world. Riders will reach a top speed of 28 mph over 950 feet of enclosed tunnels and open-air slides with three gravity-defying blasts and five breathtaking drops. Tsunami Surge will also feature AquaLucent technology, giving riders the sensation of traveling at the speed of light as brilliant colors and dreamlike imagery heighten the ride experience.

Six Flags Mexico, the undisputed Thrill Capital of Latin America, announced its most exciting ride to date—CraZanity—the world’s tallest pendulum ride. With a record height more than 50 meters, this enormous, giant disk will reach speeds over 120 kilometers per hour as it whips back and forth, and higher and higher, to give riders an amazing view of the world all around them.

Six Flags Darien Lake, the Thrill Capital of New York State, is excited to announce that its waterpark will become Six Flags Hurricane Harbor and welcome a massive new slide. Wahoo Wave and its one-of-a-kind water wall will elevate the park’s already powerful roster of heat-beating attractions. This adrenaline-packed adventure sends four riders into near vertical surges to experience extended hang times and zero g-forces. Riders plunge 30 feet straight down before sweeping up at high speeds as they arc across the top of a massive water wall, virtually defying gravity before descending into a refreshing pool below.

Six Flags Over Texas, the Thrill Capital of Texas, will debut Aquaman: Power Wave, the first-of-its-kind water coaster in North America. Standing an impressive 148 feet tall, this massive attraction launches riders backward across more than 700 feet of track at 63 mph. As the ride completes its action-packed cycle, riders are launched forward from a 90-degree angle for the ultimate splashdown. Aquaman: Power Wave will be the park’s 15th coaster.

La Ronde, Quebec’s leading destination for thrills and family entertainment, will introduce the first ever free-fly coaster in Canada. Vipère takes coaster riding to the next level, sending riders on a head over heels journey with unexpected drops, vertical free-falls and gravity-defying somersaults. This thrilling ride will give guests the feeling of weightlessness as they soar outside the confines of a traditional track.

Six Flags New England, the Thrill Capital of New England, will introduce its latest thrill in 2020. Guests will take an adrenaline-charged flight on the all-new Supergirl Sky Flyer attraction as they soar nearly seven stories through the sky in open-air vehicles. Drawing on DC Super Hero Supergirl’s powers of stamina and strength, thrill-seekers spin and tilt at maximum speeds while suspended from the massive whirling wheel. The giant disc is raised as riders are launched into a high-speed spin, feet dangling…round and round…higher and higher. Supergirl will be located next to the park’s top ranked coaster, Superman The Ride, in the DC Super Hero Adventures section.

Magic Waters will become Hurricane Harbor Rockford when it opens next summer. The park is also adding to its thrilling attraction lineup with the only tailspin waterslide in the Midwest—Tidal Wave. This uniquely designed waterslide will send riders through a limitless wave as they descend from 43 feet above the ground, reaching speeds of 15 mph through twists and turns. The thrill slide will feature new AquaLucent technology, adding another level of excitement as the dark twists and turns light up in dazzling, full- color patterns.

Six Flags Hurricane Harbor Phoenix, the Largest Waterpark in Arizona, is offering guests a bigger, better and wetter experience with its largest expansion in years. The exciting, new Paradise Island will feature a 12,000 square foot activity pool. Guests will keep cool and enjoy plenty of fun in the sun with a new water volleyball area and a unique water basketball court. The addition will also include more shade, lounge seating, restrooms and new culinary options.

Six Flags Hurricane Harbor Arlington, the Largest Waterpark in North Texas, will open an all-new slide complex called, Banzai Pipeline. Guests will have the choice of three slides with multiple twists, turns and drops down a four-story tower for a thrilling and refreshing ride

Six Flags Fiesta Texas, the Thrill Capital of South Texas, will debut Daredevil Dive Flying Machines, the world’s tallest ride-of-its-kind. Experience the thrills and sensations of weightlessness through aerial banks, loops and dives, all while seated in a retro, four- seater steampunk flying machine. Sharply turning right side up and upside down, riders will break from formation and maneuver into aerobatic dogfights during the barnstorming journey, all while soaring nearly five stories above Crackaxle Canyon.

Six Flags Discovery Kingdom, the Thrill Capital of Northern California, is adding its 12th roller coaster, Sidewinder Safari. This unique, combination family coaster and animal exhibit immerses guests in a jungle-like setting as they enter the queue line surrounded by live snakes, lizards and other reptiles. Guests will then travel along 1,378 feet of slithering track with twisting and turning hairpin curves, rapid strike drops and 360- degree spins.

Six Flags St. Louis, the Coaster Capital of Missouri, is unleashing Catwoman Whip to catapult guests into thrilling chaos. The adventure begins as the ride’s giant arm launches 16 guests, with feet dangling, 164 feet into the air. As the massive arm whips around at up to 52 mph in a spinning rotation, the unique open-air pods are simultaneously flipping guests head over heels. From 16 stories high, guests will plummet back down toward the ground only to complete the rotation all over again for an intense adrenaline rush.

Six Flags America, DC’s Thrill Capital, will open its newest attraction, Harley Quinn Spinsanity. The oversized giant pendulum ride, named after DC super villain HARLEY QUINN, promises to deliver epic, high-flying excitement as it spins and swings to breathtaking heights. The towering, swinging, giant disc will reach speeds up to 70 mph as it whips back and forth, going higher and higher while constantly spinning, giving riders an exhilarating riding experience.

Six Flags Magic Mountain, the undisputed “Thrill Capital of the World,” will have the biggest-ever expansion of the park’s two signature annual events, Fright Fest in the fall and Holiday in the Park during the winter season. The expanded event offerings will be located in the newly renovated area of the park, The Underground, where the new coaster, West Coast Racers, will soon open. Both events will have an urban “street vibe” and feature exciting and uniquely themed activities and entertainment, adding an entirely different dimension to each of the park’s most popular events.

This fall, Six Flags delivers the biggest and scariest Halloween event on the planet— Fright Fest®. No one does Halloween like Six Flags with plenty of Thrills by Day and Fright by Night and more ghouls, more haunted mazes and more terrifying scares than ever before. Also, back by popular demand, Six Flags is featuring the 30-Hour Coffin Challenge. Brave, would-be coffin dwellers are encouraged to sign up for the most frightening night of their lives and the chance to win a cash prize and 2020 Season Passes…if they dare.

Later in the year, tis the season for a winter spectacular as 13 parks ring in the holidays with Holiday in the Park®. This treasured, time-honored Six Flags tradition offers a winter wonderland of all the beloved sights and sounds of the season. Holiday in the Park features festive holiday-themed shows and delicious seasonal treats, along with select rides and attractions, set against the backdrop of millions of twinkling lights.

Six Flags is also announcing the start of 2020 Season Pass sales with its amazing Flash Sale through Labor Day weekend, featuring the best deal of the year-—savings up to 70% off on a 2020 Pass.

Joe Kleimanhttp://wwww.themedreality.com
Raised in San Diego on theme parks, zoos, and IMAX films, InPark's Senior Correspondent Joe Kleiman would expand his childhood loves into two decades as a projectionist and theater director within the giant screen industry. In addition to his work in commercial and museum operations, Joe has volunteered his time to animal husbandry at leading facilities in California and Texas and has played a leading management role for a number of performing arts companies. Joe previously served as News Editor and has remained a contributing author to InPark Magazine since 2011. HIs writing has also appeared in Sound & Communications, LF Examiner, Jim Hill Media, The Planetarian, Behind the Thrills, and MiceChat His blog, ThemedReality.com takes an unconventional look at the attractions industry. Follow on twitter @ThemesRenewed Joe lives in Sacramento, California with his wife, dog, and a ghost.
Share
Facebook
Twitter
Linkedin
Email
Print
WhatsApp
Pinterest
ReddIt
Tumblr
Previous articleWhiteWater presents “Splash Factor Report: A state of the nation on water rides”
Next articleTechnifex announces three new executives