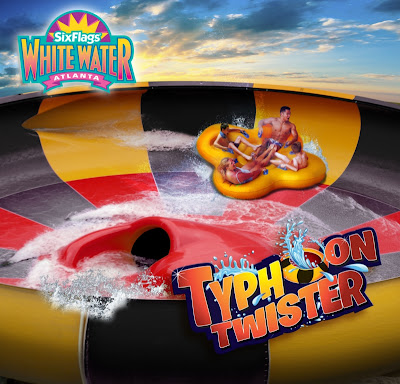 SkyScreamer, an extreme swing ride, will spin guests in a 98-foot circle at speeds of 40 miles per hour atop a 24-story tower. Thirty-two guests board the ride and sit two across in open-air swings as they climb to the top of the tower while spinning round and round, high above the ground below. SkyScreamer will be the tallest attraction in the park’s 45-year history, 4-stories taller than the park’s mega coaster, Goliath.

At Six Flags White Water, Typhoon Twister will make landfall next summer as it sends riders barreling down an enclosed five-story drop before shooting out into a 67-foot bowl. Riders in four-passenger tubes will experience several revolutions against the wall of the bowl, spin down into the corkscrew drop chute and splash into the pool below. Typhoon Twister will be the first of its kind in the state.

“We are beyond excited to debut these new thrilling attractions at our parks next year,” said Melinda Ashcraft, park president, Six Flags Atlanta Properties. “SkyScreamer will take thrills to new heights at Six Flags Over Georgia and Typhoon Twister is sure to make a splash at Six Flags White Water. The 2013 season will be another exciting year for our parks as we continue to provide innovative rides, shows and attractions for our guests.”

Both attractions are set to debut in late Spring, 2013.

For more information about Six Flags Over Georgia and SkyScreamer, visit sixflags.com/overgeorgia

About Six Flags Entertainment Corporation
Six Flags Entertainment Corporation is the world’s largest regional theme park company with over $1.0 billion in revenue and 19 parks across the United States, Mexico and Canada. For more than 50 years, Six Flags has entertained millions of families with world-class coasters, themed rides, thrilling water parks and unique attractions including up-close animal encounters, Fright Fest® and Holiday in the Park®. For more information, visit www.sixflags.com .

Joe Kleimanhttp://wwww.themedreality.com
Raised in San Diego on theme parks, zoos, and IMAX films, InPark's Senior Correspondent Joe Kleiman would expand his childhood loves into two decades as a projectionist and theater director within the giant screen industry. In addition to his work in commercial and museum operations, Joe has volunteered his time to animal husbandry at leading facilities in California and Texas and has played a leading management role for a number of performing arts companies. Joe previously served as News Editor and has remained a contributing author to InPark Magazine since 2011. HIs writing has also appeared in Sound & Communications, LF Examiner, Jim Hill Media, The Planetarian, Behind the Thrills, and MiceChat His blog, ThemedReality.com takes an unconventional look at the attractions industry. Follow on twitter @ThemesRenewed Joe lives in Sacramento, California with his wife, dog, and a ghost.
Share
Facebook
Twitter
Linkedin
Email
Print
WhatsApp
Pinterest
ReddIt
Tumblr
Previous articleSix Flags Great America to End day with "igNIGHT Grand Finale" in 2013
Next articleSix Flags Magic Mountain Offers Two Ways to Ride World’s Largest Loop in 2013