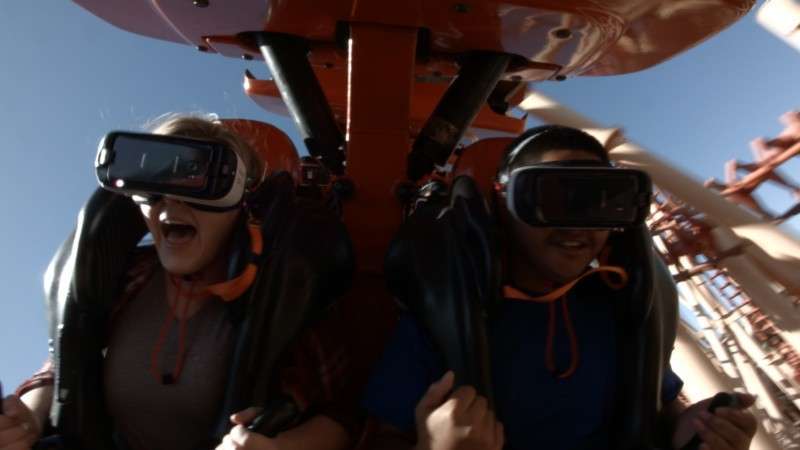 When Kong, an inverted looping coaster, opened in 1998 at Marine World/Africa USA, a combination marine life and zoological park located near San Francisco, it was one of the first coasters in the park, laying the foundation for the park’s transformation into Six Flags Discovery Kingdom. Since then, it has been overshadowed by some of the top coasters in the Six Flags family, including Medusa, a Bolliger & Mabillard floorless coaster; Superman Ultimate Flight, the first triple launch coaster from Premier Rides; and The Joker, a Rocky Mountain Coasters overhaul of an existing wooden coaster, complete with inversions.

This year, Discovery Kingdom’s Kong has been added to the program with the Galactic Attack storyline, which incorporates augmented reality segments and a higher level of interactivity than previous iterations. The VR experience has breathed new life into the ride, now approaching its twentieth year of operation. After experiencing Galactic Attack for myself, I spoke with Sam Rhodes, Six Flags Entertainment’s Director of Design.

How do you determine which coasters will receive VR?

A lot of it has to do with marketing opportunities, and there’s a lot taken into consideration as to which one to promote and market. Six Flags New England was converting its Superman coaster back from Bizzaro, so
this was a great opportunity for the Superman VR program. Shockwave at Six Flags Over Texas has always been a great opportunity. We chose Magic Mountain’s Revolution because last year was the coaster’s anniversary.

You have the same VR programs operating on different coasters in different parks, each with its own profile. How do you make that work?

Most of the coasters we’re using are older coasters, which generally have lower ridership, so we don’t have AutoCAD documents for most of them. We do the mapping based on the individual ride by mounting a special mapping system on the vehicle. Based on that data we modify the virtual environment, creating a profile for each specific ride. In a way, it’s like building a video game.

You recently announced that VR will be added to several drop towers. Is it more difficult to map VR for a tower?

Since the tower is just up and down, it’s not as complex as a coaster. But our tower in Georgia rotates, so we had to take that into consideration. We added a lot of elements for the tower rides.

Mack has experimented with VR on flat rides, such as a swinging ship. Is this something Six Flags is considering?

We’re currently not looking at flat rides, but we are considering other opportunities, including walk-through attractions.

Is Six Flags considering VR coasters for its upcoming parks in the Middle East and China?

It’s my understanding that some VR is being looked at for overseas.

Why did Six Flags decide to pursue VR?

It was driven by our guests. We did thousands of guest surveys and we’re always looking at new tech. We consider ourselves to be a pretty innovative company. Since guests are looking at cell phones all day while in the park, why not use them for VR? We talked with Samsung when we started out on this program and they commented, “It’s like peanut butter and jelly.” It just goes together perfectly.

How were the headsets designed?

Our operations group looked at all options. Safety was a major concern. We looked at ride operations – it’s important to minimize slowdown. With tethering the headsets, there were questions on hygiene, so multiple headsets run through each train. We worked with medical doctors during the process. There have been a few iterations of the headset since we started, but it’s now a patented design.

Riding Galactic Attack, I noticed that as you climbed the lift hill, looking at your surroundings through the camera, a starfield begins to appear, then you see the wormhole that takes you from augmented reality to full virtual reality.

Galactic Attack is a unique system. Anything about 10-15 ft away is rendered on 4K video, anything closer is on the game engine. As you go up the lift hill, you’re riding in a sort of projection-mapped bubble. The live action uses an 8K rendered engine. We used both Unreal and Unity for the game engine.

What are some of the improvements you’re looking at for the future?

With a new Justice League movie hitting theaters this year, will we see a VR tie-in?

You never know. It’s all dependent on guest needs. But it is possible we will see further DC theming on VR.

I noticed on Galactic Attack that I could control the guns by turning my head.

There’s one other great thing you control by turning your head. There’s no specific path on the program. At certain points, if you look left, look straight, or look right, you’ll change the direction your ship heads. Each path uses a different rendered video. If you pick the right route, the right sequence, you’ll defeat the alien mothership.

One of the great things about VR is that we can easily change the program. We’ve had seasonal programs, like Rage of the Gargoyles for Fright Fest and Santa’s Wild Sleigh Ride during Holiday in the Park. Gaming is a very important part of the VR experience for us. The drop towers are gaming experiences too. It’s also very important for season pass holders, as it encourages them to revisit the park and try and beat their best score. • • •

Virtual reality programs on roller coasters and simulators are popping up around the world. In The Hague (Netherlands), the Omniversum IMAX theater came up with a simple, yet effective application of virtual reality for its guests. Joe Kleiman spoke with Berend Reijnhoudt, the Omniversum’s Executive Director.

How did you decide on the VR program?

It actually happened by coincidence. A company in Amsterdam called Force Field makes video games. They became partners with XCOR Aerospace, which is offering space flights in the future for $100,000 starting in 2025. Force Field made the simulation a sales tool, and we are the first installation commercially. In a way, we’re the test site.

How does it work?

You get into the chair – a Sony Playseat with transducers built in. You then put on the Oculus Rift glasses. In the program, you sit next to the pilot/astronaut and fly into space. You get a view of Earth and the astronaut talks to you, explaining things. The whole experience lasts four minutes. We have a total of three chairs and laptops, each independent of one another.

Did you design the VR program to complement the giant screen programming in the theater?

With the VR, we’ve created a different kind of experience next to the theater. It’s complementary to what’s in theater, so the theme works well. Right now, the theater is showing Beautiful Planet and Fly Me to the Moon. In the future, we might change our program – maybe in a year or two.

How much does the experience cost?

We sell tickets for 3.5 Euros if an IMAX ticket is bought, 5 Euros without. So far, we have sold 2000 tickets to IMAX customers. It’s in the lobby and it’s something for them to do while waiting for the show to begin, which is important because we’re not attached to a museum. It’s fun for the people doing it, and fun for others to watch. There are no monitors showing what the person is seeing, so it’s fun to watch people grab things or hang out a window that’s not there.

Joe Kleimanhttp://wwww.themedreality.com
Raised in San Diego on theme parks, zoos, and IMAX films, Joe Kleiman would expand his childhood loves into two decades as a projectionist and theater director within the giant screen industry. In addition to his work in commercial and museum operations, Joe has volunteered his time to animal husbandry at leading facilities in California and Texas and has played a leading management role for a number of performing arts companies. Joe has been News Editor and contributing author to InPark Magazine since 2011. HIs writing has also appeared in Sound & Communications, LF Examiner, Jim Hill Media, and MiceChat. His blog, ThemedReality.com takes an unconventional look at the attractions industry. Follow on twitter @ThemesRenewed Joe lives in Sacramento, California with his fiancé, two dogs, and a ghost.
Share
Facebook
Twitter
Linkedin
Email
Print
WhatsApp
Pinterest
ReddIt
Tumblr
Previous articleE&S: 8,000-Pixel Resolution
Next articleAround the World with The Producers Group