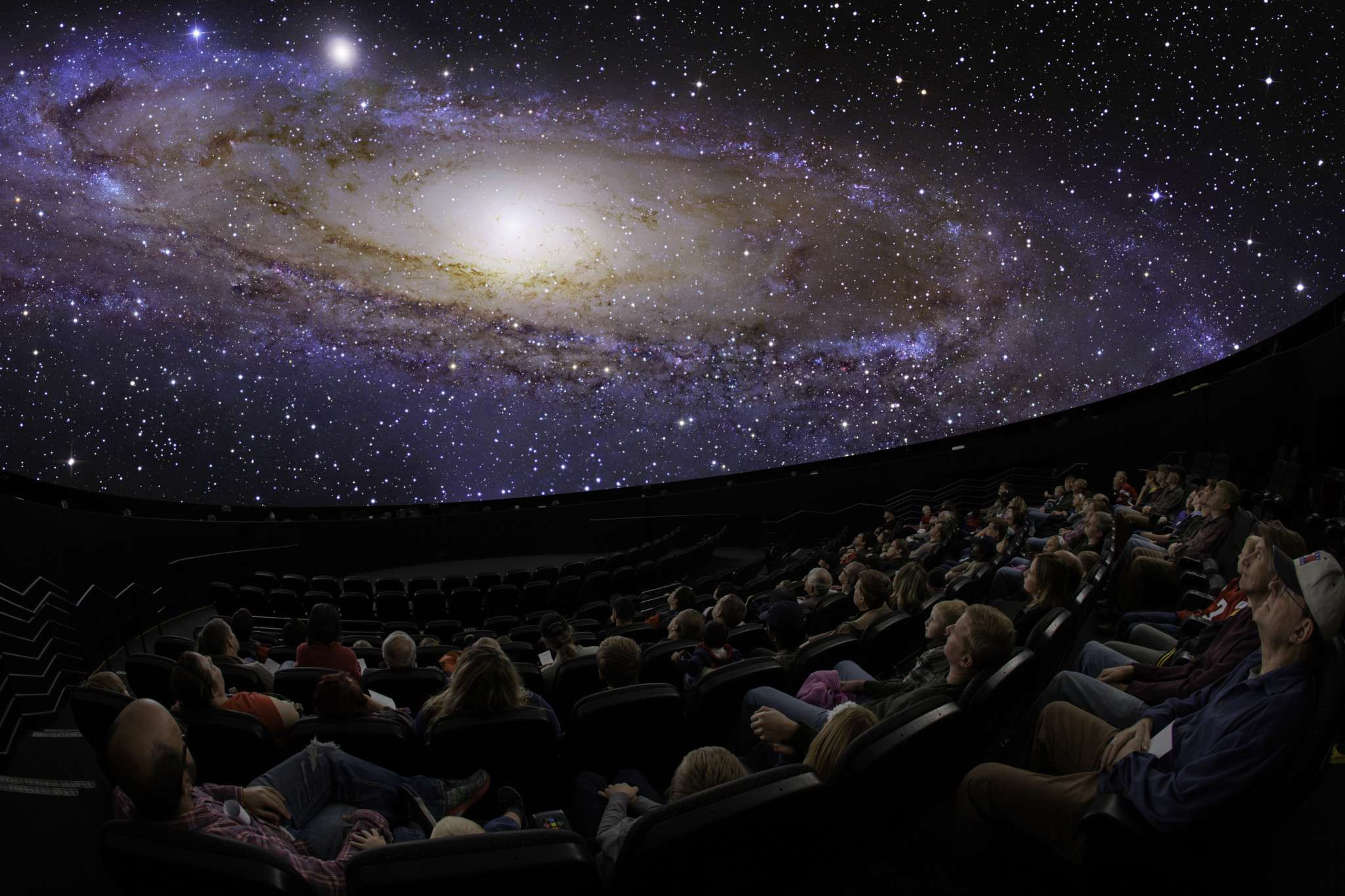 by Joe Kleiman and Judith Rubin

The ability to project in 8K resolution on the world’s largest screens is a milestone in the evolving field of digital cinema, especially in specialty markets.

On 19 April 2017, leaders and directors of more than 50 science museums across China gathered in the world’s largest fulldome (digital dome) theater, at the China Science and Technology Museum in Beijing. for a demonstration of Evans & Sutherland (E&S) True8K™ technology. The demo was part of the Beijing International Film Festival.

According to local press and others who were there, industry viewers at the demo received True8K as an absolute breakthrough – achieving the highest possible image quality on a giant dome screen and definitively surpassing the longtime benchmark set by 1570 (15-perforation, 70mm) film. This breakthrough is of great significance for specialty cinema markets, especially planetariums and giant screen domes.

The planetarium community has readily embraced and adopted digital dome systems for the past 20 years. Operators of giant screen film domes have been more reluctant to convert. But each sector is coming from a different place. An existing planetarium making such a conversion is usually upgrading from optomechanical projection (starball) and slide  projection, to full blown cinema playback coupled with real-time image generation. The operator of an existing giant screen theater, on the other hand, is replacing 1570 film projection, which as noted has been the pinnacle of visual quality for decades.

However, as planetariums began to convert wholesale to digital systems (the first permanent fulldome installations were in the late 1990s) and these systems rapidly improved in quality, the two sectors have been converging, based on similarities of audience, mission, and content requirements. E&S has for many years served the planetarium community with its Digistar digital systems, tools, and content, and so it has been a natural transition for the company to step into serving giant screen markets as well. 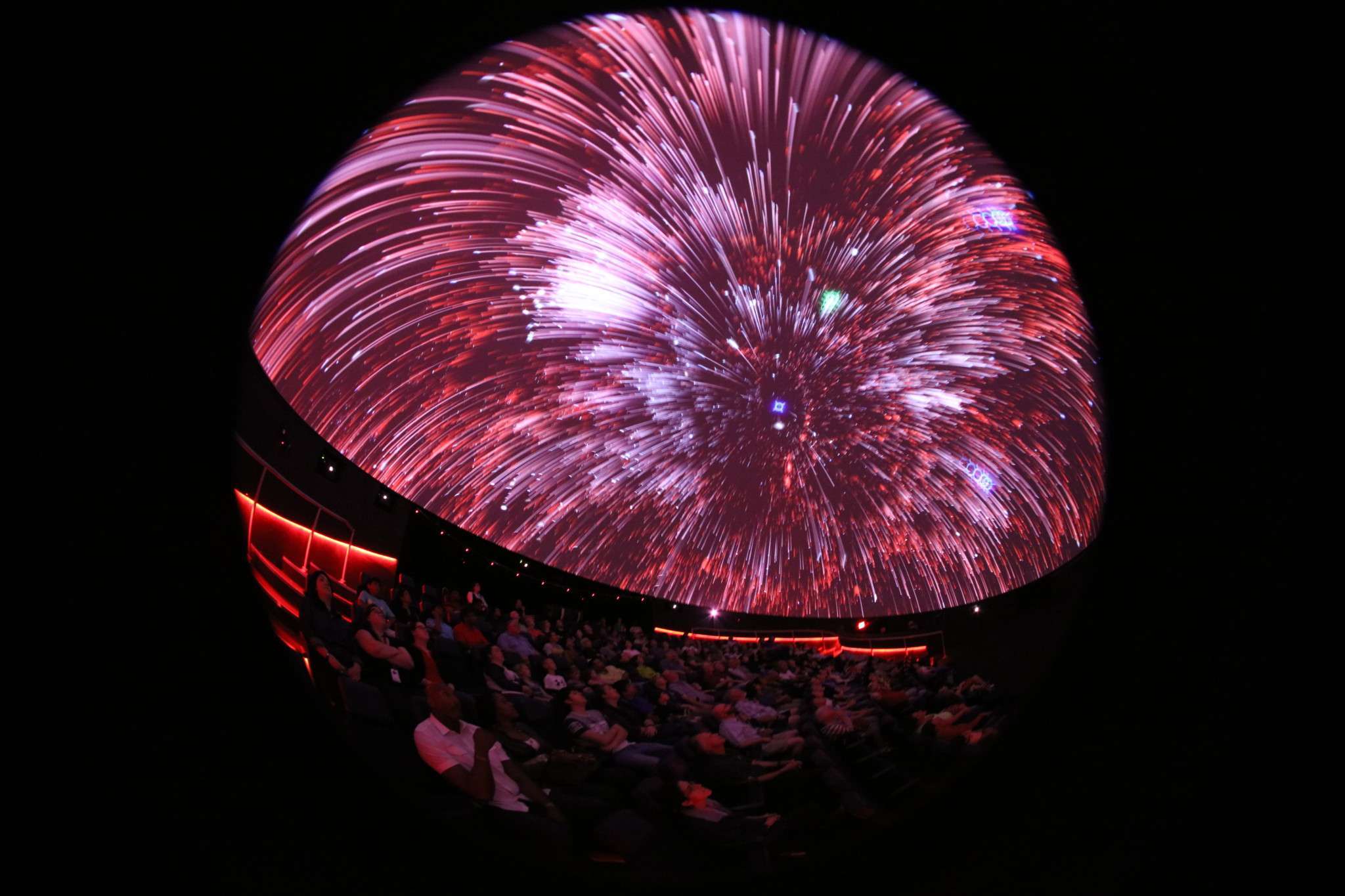 The Beijing demonstration was fourth in a series showcasing E&S digital dome technology in a “shootout” with 1570. Each successive demo – from Richmond, VA in 2014 and San Jose, CA in 2015 (both 8K), to Toronto in 2016 and Beijing in 2017 (both True8K) – showcased advances in the E&S Digistar line, the latest being Digistar 6.

Following the Toronto demo, Daniel Ferguson, director of the awardwinning giant screen film Jerusalem (who contributed clips from Jerusalem in 8K resolution to be displayed during the demo) stated: “We’ve seen incredible image stability and clarity. We’ve seen a tremendous amount of information. I had a clip of material that I’ve seen in different formats – in xenon digital, in laser, in film – and today, I saw information that I had never seen before.”

Theaters come in all sizes and requirements, and having rolled out True8K, E&S continues to offer a range of other options that allow an operator to put more or fewer pixels on the screen as needed with lamp-based, laser phosphor, and direct RGB laser projection – including 4K systems and the ‘8K’ systems that preceded True8K. (See sidebar for more detail.) Sound systems within the theater can also vary, from 5.1 and 7.1 channels to 3D special audio systems, such as Dolby Atmos.

Several institutions are now in the process of converting their giant screen dome theaters to E&S digital projection. The latest is the Liberty Science Center in Liberty City, New Jersey, housing the western hemisphere’s largest giant screen dome (88-foot diameter). This Digistar 6 theater with True8K will feature 10 Christie Boxer 4K projectors with 30,000 lumens of light each, combined into a single image with E&S auto alignment and auto blending software, along with its proprietary video synchronization. According to E&S, its solutions include facilitating its giant screen theater customers to access the same software and programs as its traditional planetarium customers.

For the giant screen market, E&S pioneered an algorithm that allows traditional giant screen documentaries to be shown on the dome. This technology eliminates image stretching that would otherwise be visible when projected from a single film projector with a fisheye lens. Industry leader Jeffrey Kirsch, former head of the Fleet Science Center (San Diego) which houses the world’s first permanent giant screen dome theater (installed in the 1970s) and doubles as a planetarium, stated after a 2004 screening of one such film converted by E&S: “That’s what they’re supposed to look like on my screen!”

While Liberty Science Center will use Christie projectors, the smaller Burke Baker Planetarium dome (50-foot diameter) at the Houston Museum of Natural Science (HMNS) – the first to feature True8K – is fitted with Sony phosphor laser projectors. Dr. Carolyn Sumners, VP of Astronomy and the Physical Sciences at HMNS, says, “We wanted something that approaches what the human eye can see, and True8K is the closest thing to come to that. With our NanoSeam screen and Sony laser projectors, we’re able to produce the darkest blacks, and you can’t see any seams. Nobody in the theater sees any pixels. And when we run pre-rendered 4K shows, the system automatically increases the resolution and they look stunning in 8K.” • • • 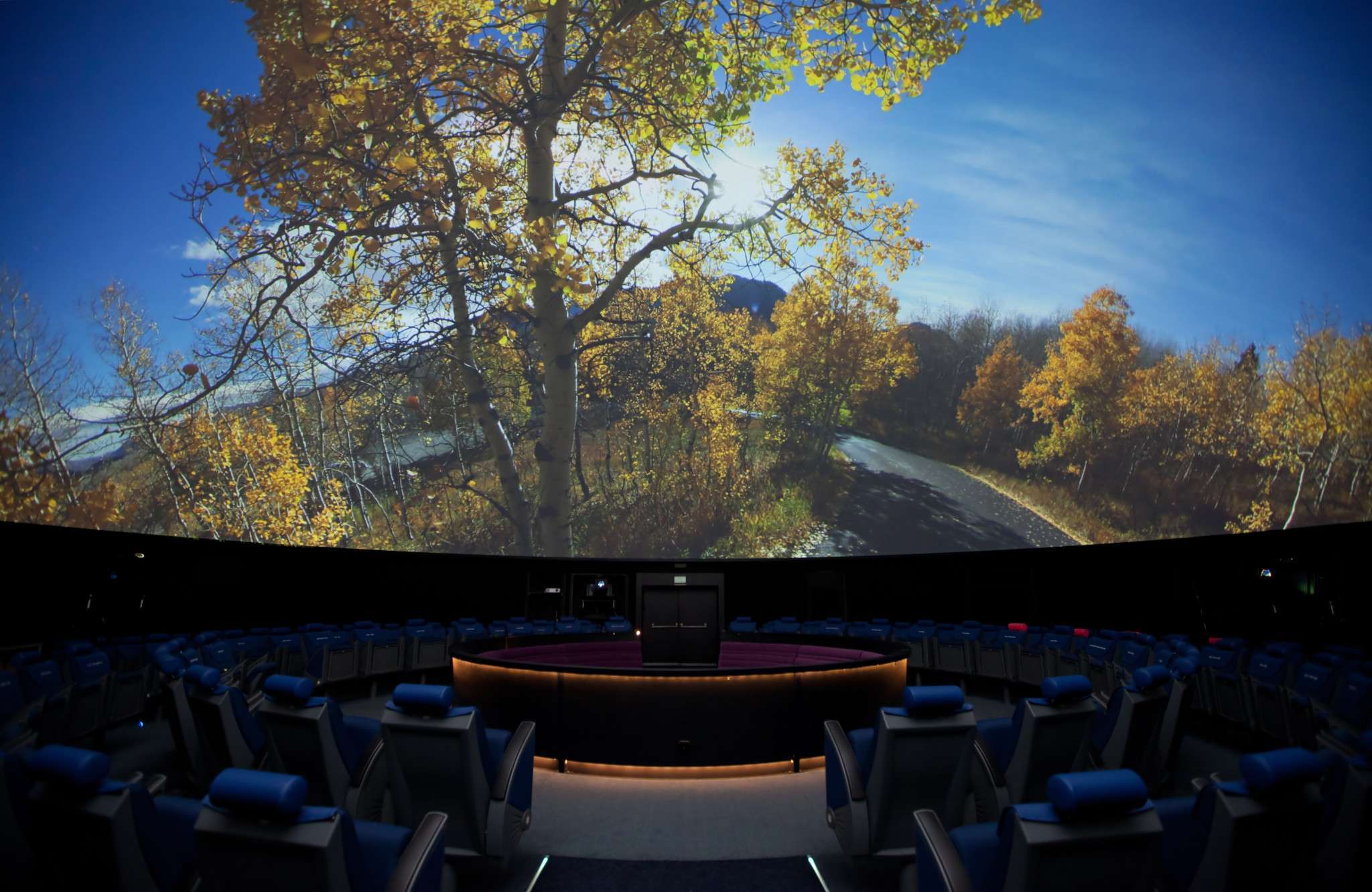 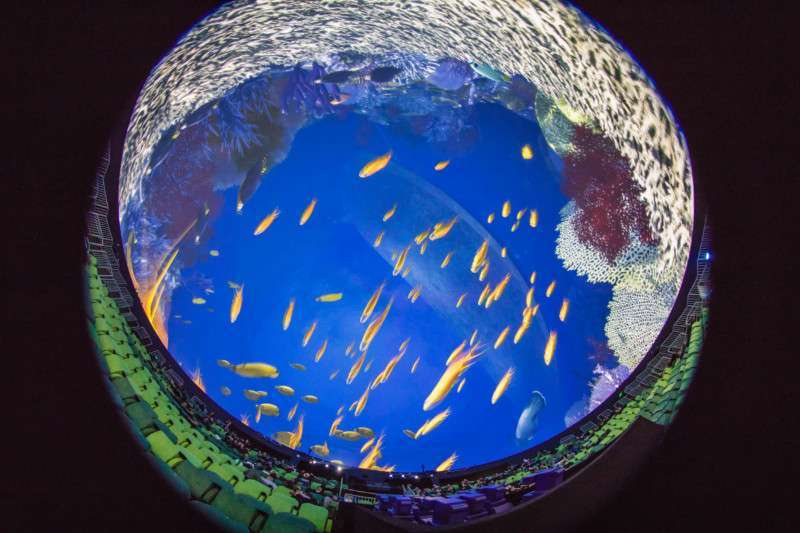 To clarify “8K” vs “True8K”: E&S 8K systems preceded the rollout of True8K. Existing 8K theaters display only 60% of what is required to be a True8K theater.

A projection frame in the 8K system, at around 30 million pixels, can be equated to 1570 film even though, technically, the pixel count of a 1570 frame is higher. In an interview on the subject published by CreativeCow.net, John Galt, Senior Vice President of Panavision, said, “When you take the entire system into account – from the lens of the camera, to the movement of the light through the projector, all slightly reducing resolution – you wind up with less than the full resolution you started with.” According to E&S, the Digistar multi-projection system remedies this problem.

The 24 frame per second rate at which 1570 film runs through the projector also dims the image. Galt pointed out, “…it’s the reason we watch such a dim picture on a movie screen, because if you pump up the screen brightness, you would notice the flicker from the 24 fps motion capture.” Higher frame rates of up to 120 fps make this a non-issue in Digistar, according to E&S.

Visit the company website at www.es.com for a full technical explanation and more info about all the various options.

E&S is positioning Digistar 6 and other products for the attractions industry. Digital projection is a match for flying theaters, motion simulators, dark rides, 3D visualization and immersive storytelling. Because Digistar 6 includes real-time processing (equivalent to a gaming engine or image generator), it supports interactivity. Currently, the system can interact with XBOX and Kinect controllers, as well as smartphones and tablets. E&S has also just introduced VR capabilities into the system. E&S subsidiary Spitz, Inc. already has some presence in the attractions industry as its screens are in high-profile, media-based installations at theme parks operated by Disney, Universal, and SeaWorld, among others. 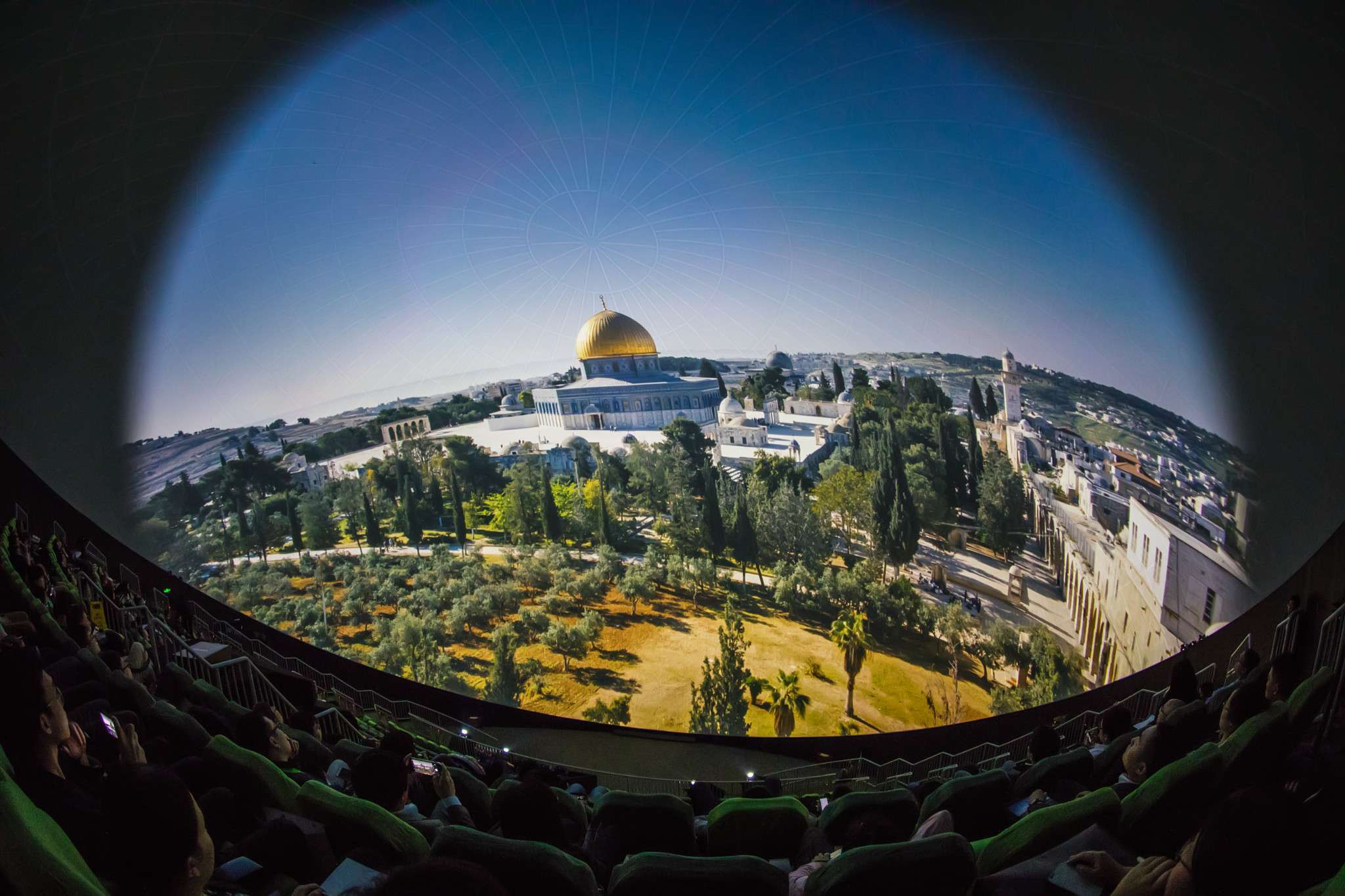 In Asia, specialty theaters are often built from scratch in new entertainment or education venues, and reflect fresh approaches. A prime example is the Cambrian Explosion Theater at the Shanghai Natural History Museum. E&S customized an 8K Digistar projection system for this unique theater in which guests have a simulated experience of traveling under water into the prehistoric Cambrian sea. Imagery is projected onto a donut-shaped, Spitz NanoSeam screen that curves below the audience. It opened in 2015.

Professor Lim Tit Meng, CEO of Science Centre Singapore says, “We want to leverage the power of digital technology to enhance the way we educate and inspire interest in science and technology. The Digistar system provides access to a greater range of educational content – both in terms of shows and real time data – and the software capability enables us to create our own content in the future.” 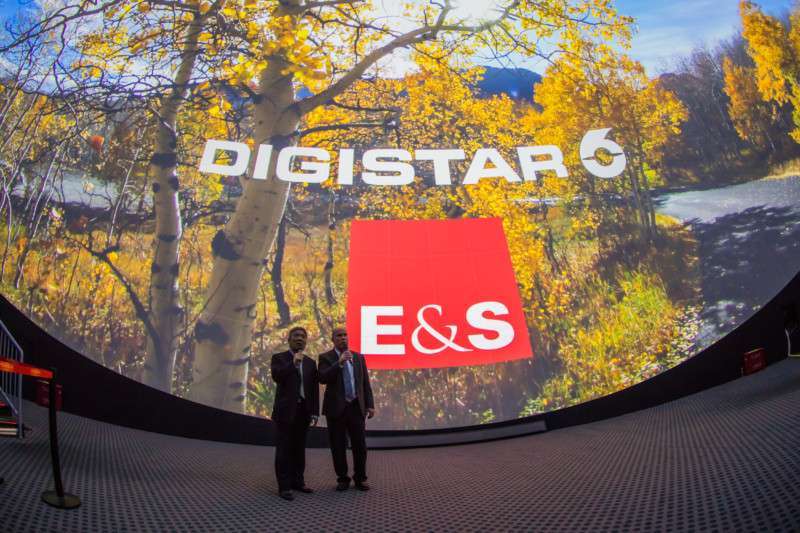 For planetariums and other scientific institutions, E&S tools include User Interface and Show Builder. These support creating shows inhouse, based on intuitive drag-and-drop architecture. Scenes can be snapshotted and then modified sequentially.

When clients purchase Digistar 6, they are also becoming part of an active professional community, the Digistar Users Group (DUG) that exchanges information and resources on a regular basis, in addition to collaborating on and sharing content. Digistar 6 includes some key features that enable content sharing across the Digistar community, including:

• DATA2DOME: Digistar 6 is the first digital dome system to fully integrate this new standard from the International Planetarium Society. With Data2Dome, videos, images, fulldome stills, and more are instantaneously transmitted from a variety of sources on Earth and in space.

• DIGISTAR CLOUD: Digistar users can upload their creations – anything from spaceships to weather patterns – into the cloud for others to download, incorporate, modify and re-share.

• DOMECASTING: Digistar theaters can broadcast live presentations to other theaters on the network, increasing the audience to view a live show simultaneously.

E&S also produces and cross-platforms a library of pre-rendered shows for playback in fulldome theaters. The company recently welcomed noted fulldome show producer Robin Sip as Director of Show Production & Content. Sip’s first production for E&S will be “Mars: One Thousand One,” a 45-minute film that combines live action with computer animation and details the first manned mission to Mars.

E&S’s subsidiary Spitz Inc. is a longtime leader in the industry with its own line of products and content. Notably, Spitz is a leader in screens for dome theaters, with over 2,000 in place on six continents. Since 2007, some 150 theaters have installed Spitz NanoSeam screens, which feature flush panels that eliminate all seams from view. The Fleet’s Jeffrey Kirsch remarked, “It’s like sitting in an eggshell,” while Mark Webb of Chicago’s Adler Planetarium, a recent recipient of two 8K Digistar 6 systems, noted, “Having the screen surface ‘disappear’ from the scene adds depth and realism to the experience.”

Joe Kleimanhttp://wwww.themedreality.com
Raised in San Diego on theme parks, zoos, and IMAX films, Joe Kleiman would expand his childhood loves into two decades as a projectionist and theater director within the giant screen industry. In addition to his work in commercial and museum operations, Joe has volunteered his time to animal husbandry at leading facilities in California and Texas and has played a leading management role for a number of performing arts companies. Joe has been News Editor and contributing author to InPark Magazine since 2011. HIs writing has also appeared in Sound & Communications, LF Examiner, Jim Hill Media, and MiceChat. His blog, ThemedReality.com takes an unconventional look at the attractions industry. Follow on twitter @ThemesRenewed Joe lives in Sacramento, California with his fiancé, two dogs, and a ghost.
Share
Facebook
Twitter
Linkedin
Email
Print
WhatsApp
Pinterest
ReddIt
Tumblr
Previous articleGreening Great America
Next articleSix Flags: Behind the headsets