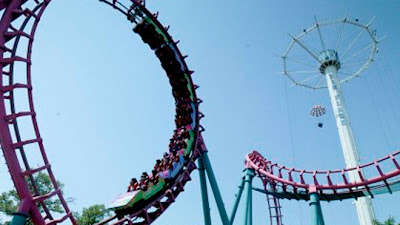 Arlington, TX, USA — Six Flags Over Texas is inviting guests to join in and say farewell to Texas Chute Out and Flashback over the Labor Day weekend.

Texas Chute Out opened at the park in 1976 and was modeled after the old parachute drop at Coney Island. More than 29 million riders have travelled up and down the ride’s 200-foot structure. One of the most popular modes of travel on this ride was the basket, which allowed guests to stand in a basket to take in the picturesque skyline. The baskets were removed in 1994 and replaced with the standard chairs. This iconic attraction has been a long time favorite of guests young and old since its opening.

Its neighboring ride, Flashback, opened in 1989. The boomerang-styled coaster was one of the first built in the United States. The corkscrew spiraled layout flips riders upside down a total of six times—three times forward and three times backwards at speeds up to 50 mph. It has thrilled over 17 million park-goers for more than three decades.

Labor Day weekend, park guests are invited to come out and enjoy these rides one last time and join in for the final farewell on Monday, September 3. For more information on Texas Chute and Flashback, visit sixflags.com/overtexas.

Joe Kleimanhttp://wwww.themedreality.com
Raised in San Diego on theme parks, zoos, and IMAX films, InPark's Senior Correspondent Joe Kleiman would expand his childhood loves into two decades as a projectionist and theater director within the giant screen industry. In addition to his work in commercial and museum operations, Joe has volunteered his time to animal husbandry at leading facilities in California and Texas and has played a leading management role for a number of performing arts companies. Joe previously served as News Editor and has remained a contributing author to InPark Magazine since 2011. HIs writing has also appeared in Sound & Communications, LF Examiner, Jim Hill Media, The Planetarian, Behind the Thrills, and MiceChat His blog, ThemedReality.com takes an unconventional look at the attractions industry. Follow on twitter @ThemesRenewed Joe lives in Sacramento, California with his wife, dog, and a ghost.
Share
Facebook
Twitter
Linkedin
Email
Print
WhatsApp
Pinterest
ReddIt
Tumblr
Previous articleChance Rides Giant Wheel Newest Highlight of Seattle Waterfront
Next articleSix-Story Tall Rope Course Opens in Texas