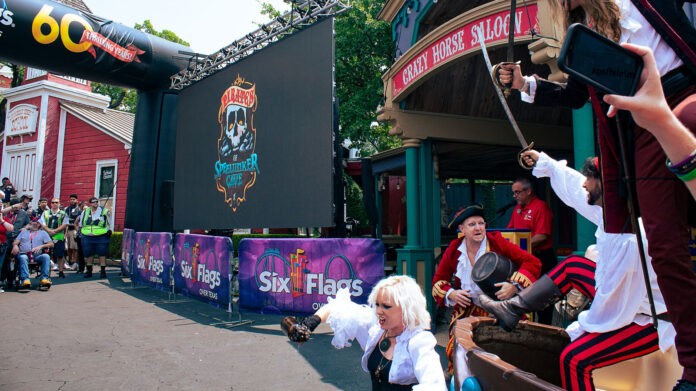 On Aug. 5, Six Flags Over Texas celebrated its 60th anniversary by announcing an all-new ride experience will make its debut for the 2022 season. Pirates of Speelunker Cave will place guests squarely in the middle of a pirate treasure hunt thwarted by resident Speelunkers. This new attraction is the second new ride announced at the park and is scheduled to open early in 2022. Aquaman: Power Wave, a previously announced multi-launch water coaster, will also debut next season.

“Six Flags Over Texas has built a solid reputation of providing innovative thrills and lifelong memories for generations of families,” said Six Flags Over Texas Park President Ron McKenzie. “What better way to celebrate our park’s 60th anniversary than by announcing a brand-new attraction that pays homage to our past and launches us into the future,” added McKenzie.

An all-new entry plaza will welcome adventurers with coastal theming and an open vantage point of the ride’s first descent into the Speelunker’s Cave. Once aboard their six-passenger boat, riders will experience 17 brand-new scenes that combine cinematic projection with immersive sets and animatronics.

Pirates of Speelunker Cave is a re-imagining of one of the park’s first attractions, The Cave, that operated from 1964 until 1991 and will replace the current version of the attraction — Yosemite Sam and the Gold River Adventure. The Cave featured original characters called Speelunkers that were created exclusively for Six Flags Over Texas.

Pirates of Speelunker’s Cave will feature:

Pirates of Speelunker Cave is set to debut in early 2022 and will be the first of two major attractions opening at the theme park next season.

Six Flags Over Texas, in partnership with Warner Bros. Consumer Products, on behalf of DC, will debut the next generation in water coaster thrill rides and the first-of-its-kind in North America with Aquaman: Power Wave. The park’s previously announced 15th coaster will launch riders backwards and forwards, straight up colossal 148 feet twin track towers and then send them plunging straight down, screaming across more than 700 feet of track before hurtling at 63 miles per hour towards the ultimate massive splash down. It is scheduled to open in summer of 2022.