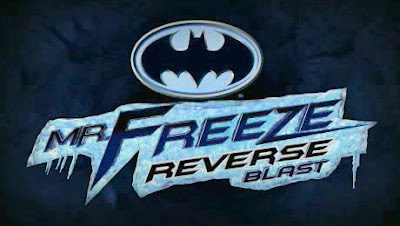 Arlington, TX and St. Louis, MO, USA (March 22, 2012) /PRNewswire/ — Six Flags Over Texas and Six Flags St. Louis, in partnership with Warner Bros. Consumer Products and DC Entertainment, today announced the next generation of cool thrills with the debut of an all-new ride experience, MR. FREEZE: Reverse Blast. Launching in spring 2012, the coolest coaster on the planet is even cooler… in reverse! Riders will travel backwards through a 190-foot tunnel, into a 180-degree inversion before climbing more than 200-feet in the air where they will find themselves suspended, dangling in the air, before repeating the entire chilling experience.

“Reversing the direction of the trains on two of our most popular coasters is a fun twist on the ride experience,” said Al Weber, Six Flags chief operating officer. “MR. FREEZE: Reverse Blast demonstrates Six Flags’ commitment to continually push the envelope and deliver new and innovative thrills to our guests.”

The ride will maintain the original MR. FREEZE theme, patterned after Batman’s cold-hearted arch rival in the DC Comics Batman series. The adventure begins with a chilling walk through “Snowy’s Cones,” an old abandoned ice cream warehouse that secretly doubles as the favorite hideout of this “Villain of Chillin.” By the time riders discover that “Snowy’s Cones” isn’t an ordinary ice cream factory, it’s too late! MR. FREEZE is behind the controls of his iciest revenge—the coolest coaster on the planet. Riders strap into one of the 20-passenger seats and take off on the reverse ride-of-a-lifetime, covering nearly 1,500-feet of track at spine-chilling speeds of up to 70 mph—making it the fastest reverse roller coaster ride in Texas and Missouri.

“The reverse launch is sure to be dramatic,” said Tim Baldwin, editor of RollerCoaster! Magazine. “What will really blow riders away is the upward vertical climb into the sky staring face forward to the ground. Diving straight down more than 200-feet back to earth, face-down, is going to be totally wicked!”

The ride is scheduled to open to the public at both parks in May. Six Flags Over Texas opened for the 2012 season on Saturday, March 3, and Six Flags St. Louis opens for its 2012 season on Friday, April 6. For more information on the parks, visit www.sixflags.com.

ABOUT WARNER BROS. CONSUMER PRODUCTS
Warner Bros. Consumer Products, a Warner Bros. Entertainment Company, is one of the leading licensing and retail merchandising organizations in the world.

ABOUT DC ENTERTAINMENT
DC Entertainment, home to iconic brands DC Comics (Superman, Batman, Green Lantern, Wonder Woman, The Flash), Vertigo (Sandman, Fables) and MAD, is the creative division charged with strategically integrating its content across Warner Bros. Entertainment and Time Warner. DC Entertainment works in concert with many key Warner Bros. divisions to unleash its stories and characters across all media, including but not limited to film, television, consumer products, home entertainment and interactive games. Publishing thousands of comic books, graphic novels and magazines each year, DC Entertainment is the largest English-language publisher of comics in the world. In January 2012, DC Entertainment, in collaboration with Warner Bros. and Time Warner divisions, launched We Can Be Heroes—a giving campaign featuring the iconic Justice League super heroes—to raise awareness and funds to fight the hunger crisis in the Horn of Africa.

Joe Kleimanhttp://wwww.themedreality.com
Raised in San Diego on theme parks, zoos, and IMAX films, InPark's Senior Correspondent Joe Kleiman would expand his childhood loves into two decades as a projectionist and theater director within the giant screen industry. In addition to his work in commercial and museum operations, Joe has volunteered his time to animal husbandry at leading facilities in California and Texas and has played a leading management role for a number of performing arts companies. Joe previously served as News Editor and has remained a contributing author to InPark Magazine since 2011. HIs writing has also appeared in Sound & Communications, LF Examiner, Jim Hill Media, The Planetarian, Behind the Thrills, and MiceChat His blog, ThemedReality.com takes an unconventional look at the attractions industry. Follow on twitter @ThemesRenewed Joe lives in Sacramento, California with his wife, dog, and a ghost.
Share
Facebook
Twitter
Linkedin
Email
Print
WhatsApp
Pinterest
ReddIt
Tumblr
Previous articlePrime Play Supplying South Florida’s Largest Ropes Course to Wow Factory
Next articleOhio Parks and Museums Prepare New Adventures for 2012