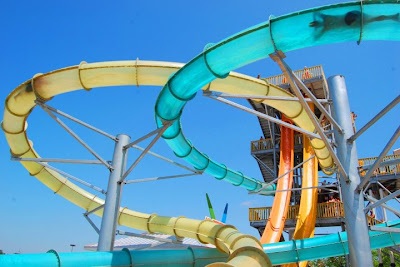 Bonzai Pipeline is the ultimate wipeout experience featuring twin, looping slides and the Proslide Skybox launching capsule. Once guests reach the top of the 6-story structure they step into one of two capsules. After the capsule doors are closed, the floor drops out beneath riders sending them free-falling down the 290-ft. slide at up to 40 mph. Before reaching the bottom, riders will surf through a 360 degree “super loop” in Bonzai Pipeline’s clear tubes which allows spectators below to follow all the high-speed action.

“Hurricane Harbor offers a great variety of water attractions,” said Dave Roemer, Six Flags St. Louis park president. “Bonzai Pipeline will be the most intense water ride by far with the suspense of being launched from the capsules and traveling through the enclosed, looping tubes. We promised our guests an Xtreme experience and Bonzai Pipeline delivers.”

The four couples who took their wedding vows were winners of a local contest. Each couple exchanged vows at the top of the structure and was pronounced husband and wife as they splashed down at the end of the slide. Bonzai Pipeline is manufactured by Proslide Technology, Inc.

Bonzai Pipeline is the latest addition to the park’s exciting new offerings for 2012. Earlier in May, Six Flags St. Louis put a new twist on one of its most popular roller coasters as guests now launch backward and experience the entire ride in reverse. Also new this season, several in-park shows; a Coca-Cola Freestyle™ Room where guests can mix their own drinks/sodas from over 120 flavors; and the new Season Dining Pass which offers guests two meals each time they visit the park for unlimited visits.

Joe Kleimanhttp://wwww.themedreality.com
Raised in San Diego on theme parks, zoos, and IMAX films, InPark's Senior Correspondent Joe Kleiman would expand his childhood loves into two decades as a projectionist and theater director within the giant screen industry. In addition to his work in commercial and museum operations, Joe has volunteered his time to animal husbandry at leading facilities in California and Texas and has played a leading management role for a number of performing arts companies. Joe previously served as News Editor and has remained a contributing author to InPark Magazine since 2011. HIs writing has also appeared in Sound & Communications, LF Examiner, Jim Hill Media, The Planetarian, Behind the Thrills, and MiceChat His blog, ThemedReality.com takes an unconventional look at the attractions industry. Follow on twitter @ThemesRenewed Joe lives in Sacramento, California with his wife, dog, and a ghost.
Share
Facebook
Twitter
Linkedin
Email
Print
WhatsApp
Pinterest
ReddIt
Tumblr
Previous articlePhoto Essay: Legoland Waterpark, Florida
Next articleSkyVue Las Vegas Completes Phase 1 Construction of Western Hemisphere’s Largest Observation Wheel