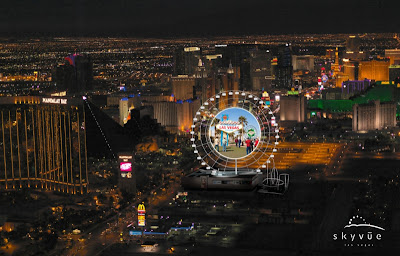 Las Vegas, NV, USA /PRNewswire/ — SkyVue, an iconic 500-square-foot observation wheel rapidly taking shape on the Las Vegas Strip, has completed the first phase of construction, is beginning its vertical climb and has begun excavation on its retail and dining experience. Upon opening, SkyVue will be the largest observation wheel in the Western Hemisphere and the first attraction of its kind in Las Vegas.

Situated across from Mandalay Bay, SkyVue will deliver unobstructed panoramic views of the world’s most famous boulevard. Strategically located just north of the famous “Welcome to Las Vegas” sign, SkyVue is set to become one of the most photographed and recognized landmarks on the Strip. Each side of the wheel will feature a 50,000-square-foot LED screen (the largest in the world), that will be visible across the entire tourist corridor, and host concerts, sporting events, product launches and more.

The project will bring more than 700 construction jobs to the community in addition to an estimated 500 full-time positions once the development opens in Q4 2013.

About SkyVue:
SkyVue, located directly across from Mandalay Bay on the Las Vegas Strip, will forever change the landscape of America’s playground. Set to become the largest observation wheel in the Western Hemisphere, the 500-foot iconic attraction will feature the world’s largest HD LED multimedia displays – each measuring larger than a football field – and 32 glass-walled gondolas. Offering unparalleled views of the city, the gondolas will be available for private and corporate events. Led by Howard Bulloch and David Gaffin of Compass Investments, the project will also include 21,000 square feet of convention space and 140,000 square feet of retail space, dining and entertainment options. SkyVue is slated to open Q4 2013. For more information on SkyVue, visit http://skyvuelasvegas.com.

Joe Kleimanhttp://www.themedreality.com
Raised in San Diego on theme parks, zoos, and IMAX films, Joe Kleiman would expand his childhood loves into two decades as a projectionist and theater director within the giant screen industry. In addition to his work in commercial and museum operations, Joe has volunteered his time to animal husbandry at leading facilities in California and Texas and has played a leading management role for a number of performing arts companies. Joe has been News Editor and contributing author to InPark Magazine since 2011. HIs writing has also appeared in Sound & Communications, LF Examiner, Jim Hill Media, and MiceChat. His blog, ThemedReality.com takes an unconventional look at the attractions industry. Follow on twitter @themedreality Joe lives in Sacramento, California with his fiancé, two dogs, and a ghost.
Share
Facebook
Twitter
Linkedin
Email
Print
WhatsApp
Pinterest
ReddIt
Tumblr
Previous articleSix Flags St. Louis Sends Wedded Bliss Down the Drain
Next articleOregon Aquarium Opens Interactive Exhibit for the Under 10 Crowd