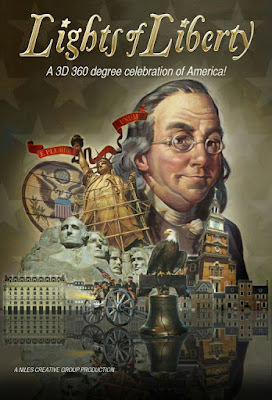 Miami Beach — Smart Monkeys was chosen by David Niles–best-known for his pioneering HD production and for creating the award winning Comcast Experience–to build the show control and programming for “Liberty 360,” a 360º stereoscopic 3D exhibit produced by Niles Creative Group for the Historic Philadelphia Center. The 15-minute experience uses storytelling (Ben Franklin appears as the historical escort) and theatrical illusion to portray the evolution of democracy in the United States. Niles created the original concept for the exhibit as well as the unique theater design for the 360º stereo 3D projection.

“We have worked with David on several projects, and it was a pleasure to do the groundbreaking ‘Liberty 360’ with him,” says Smart Monkeys’ Stephan Villet. “David knows how to explain what he wants and always gives us the right guidance. The rapport we’ve established with him enables us to work successfully on our own while feeling like part of the Niles Creative Group family.” 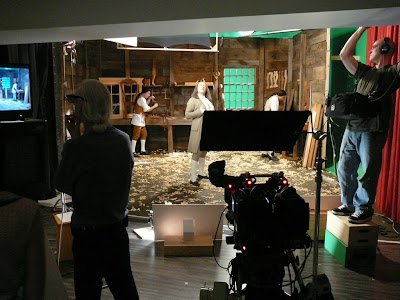 “Liberty 360” hosts up to 65 visitors at a time wrapping them in a cylindrical screen delivering a continuous, edge-blended, single image more than 150 feet wide and eight feet high. Wearing special 3D glasses, the audience perceives an accurate 360º effect that realistically simulates images coming at, around and behind them wherever they stand in the space.

“What we built was a system that allows the operator to start the show and run it all day long from a simple push of a touch screen button,” says Villet. Control was required for 7th Sense Delta media servers (four of them 8-channel) that acted as video sources, eight Barco Galaxy NW-12 projectors, house lighting and a photographic capture system whose pictures become part of each show. The main controller is a Medialon Show Master Pro; a backup system is on hand and ready to go online if needed.

Three seven-inch touch panels provide operator control: one located at the capture system, one in the theater and one in the equipment room. All panels run the same application and each screen is customized for its function in each location of the show.

Smart Monkeys programmed a two-part interface: one to control the show and one to permit access to the equipment for control and monitoring. “You can see the status of each monitor, check the brightness of the lights and look at the capture system,” Villet explains. “Our control systems help migrate pictures from the capture system into the video servers which then load them into the movie. It’s all about making the systems work together without changing any of the components. That way, if something changes, it can be easily swapped out.”

The fact that “Liberty 360” is stereo 3D didn’t alter the nature of the control system programming, he points out. “Control-wise, there was nothing different about the show: We’re still controlling sources and projectors. But because the concept was a world’s-first, it was really important that nothing else get in the way. Everything had to be very simple and reliable. Our role had to work perfectly.”

Smart Monkeys also provided control for the NileStrip LED wall that rings the exterior of the PECO theater and whose constantly-changing animations can be viewed from the street.

Niles notes that it’s his goal to “make things the customer can operate easily and maintenance-free. Smart Monkeys has always risen to our challenges. We keep breaking barriers, and they keep coming up with ways to make the programming and interface user-friendly. They’re a wonderful partner that always devises the solutions we need.”

Judith Rubin
Judith Rubin ([email protected]) is a leading journalist, publicist, strategist, blogger, content marketing specialist and connector in the international attractions industry. She excels at writing about all aspects of design and technical design, production and project management. Areas of special interest include AV integration and show control, lighting design and acoustics, specialty cinema, digital video and world’s fairs. Judith has ties to numerous industry organizations. From 2005-2020 she ran communications, publications and social media for the Themed Entertainment Association (TEA). In 2013, she was honored with the TEA Service Award. She was development director of IMERSA, and co-chair of the 2014 IMERSA Summit. She was publicist for the Large Format Cinema Association in the 1990s, now part of the Giant Screen Cinema Association (GSCA) and has also contributed to the publications of PLASA, IAAPA and the International Planetarium Society. Already making her mark as a magazine and book editor, Judith joined World’s Fair magazine in 1987, which introduced her to the attractions industry. Launching as a freelancer in the mid 1990s she has contributed to dozens of publications and media outlets including Funworld, Lighting&Sound America, Sound & Communications, Urban Land, The Raconteur and The Planetarian. She joined InPark in 2010. Judith earned a Bachelor of Fine Arts from Pratt Institute. She has lived in New York City and the San Francisco Bay Area, and now makes her home in Saint Louis, where she is active in the local arts and theater community.
Share
Facebook
Twitter
Linkedin
Email
Print
WhatsApp
Pinterest
ReddIt
Tumblr
Previous articlePGAV Destinations Celebrates 50 Project Openings in Ten Years – Most Prolific Period in Firm’s 45-Year History
Next articleElectrosonic Installs Interactive Planar Clarity Video Wall at the Guinness World Records Museum in Hollywood