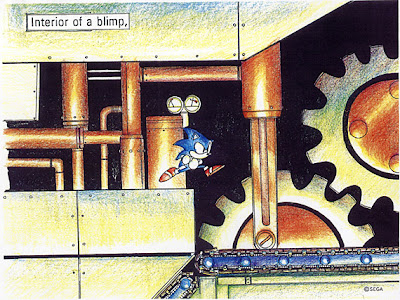 Washington, DC, USA (March 1, 2012) — “The Art of Video Games” is one of the first major exhibitions to explore the 40-year evolution of video games as an artistic medium, with a focus on striking graphics, creative storytelling and player interactivity. The exhibition features some of the most influential artists and designers across five eras of game development, from early pioneers to contemporary designers. Video games use player participation to tell stories and engage audiences. In the same way as film, animation and performance, video games are a compelling and influential form of narrative art.

“The Art of Video Games” is on display at the Smithsonian American Art Museum from March 16 through Sept. 30. Chris Melissinos, former chief evangelist and chief gaming officer for Sun Microsystems and founder of PastPixels, is the guest curator of the exhibition. Georgina Goodlander, the museum’s social media and Web content manager, is the exhibition coordinator. The exhibition will travel to 10 cities in the United States following its run in Washington, D.C.

“Video game designers are engaged in creating a world, as are all artists,” said Elizabeth Broun, The Margaret and Terry Stent Director of the Smithsonian American Art Museum. “The Smithsonian American Art Museum recognizes the designers and developers who create these beguiling worlds in this exhibition. Contemporary video games have taken this creative expression to a whole new level, and we are eager to explore this popular global phenomenon.”

“Video games are a prevalent and increasingly expressive medium within modern society,” said Melissinos. “In the 40 years since the introduction of the first home video game, the field has attracted exceptional artistic talent. Video games, which include classic components of art, offer designers a previously unprecedented method of communicating with and engaging audiences by including a new element, the player, who completes the vivid, experiential art form by personally interacting with the game elements.”

“The Art of Video Games” focuses on the interplay of graphics, technology and storytelling through some of the best games for 20 gaming systems ranging from the Atari VCS to the PlayStation 3. The exhibition features 80 video games, selected with the help of the public, that demonstrate the evolution of the medium. The games are presented through still images and video footage. In addition, the galleries include video interviews with developers and artists, historic game consoles and large prints of in-game screen shots.

New technologies allow designers to create increasingly interactive and sophisticated game environments while staying grounded in traditional game types. Five featured games, one from each era, are available in the exhibition galleries for visitors to play for a few minutes, to gain some feel for the interactivity. The playable games—Pac-Man, Super Mario Brothers, The Secret of Monkey Island, Myst and Flower—show how players interact with the virtual worlds, highlighting innovative new techniques that set the standard for many subsequent games.

Visitors to the exhibition are greeted by excerpts from selected games projected 12 feet high, accompanied by a chipmusic soundtrack by 8 Bit Weapon and ComputeHer, including “The Art of Video Games Anthem” recorded by 8 Bit Weapon specifically for the exhibition. These multimedia elements convey the excitement and complexity of the featured video games. An interior gallery includes a series of short videos showing the range of emotional responses players have while interacting with games. Excerpts from interviews with 20 influential figures in the gaming world also are presented in the galleries.

The museum invited the public to help select the video games in the exhibition. A pool of 240 games was selected by Melissinos and an advisory group consisting of game developers, designers, industry pioneers and journalists. Voting took place between Feb. 14, 2011, and April 17, 2011. More than 3.7 million votes were cast by 119,000 people in 175 countries. The full list of advisory group members is available in the museum’s online press kit for the exhibition, americanart.si.edu/pr/kits/#taovg.

The museum launched its first micro-donation campaign in connection with the exhibition in September 2011. Individuals can become a part of this historic exhibition by adding his or her name to the credits, which are projected in the exhibition, by supporting the exhibition online or by text message. Details are on the museum’s website, americanart.si.edu/taovg.

“GameFest,” a three-day festival with talks, discussions, open game playing, music and movies, celebrates the opening of this ground breaking exhibition. Friday, March 16, Melissinos moderates two panel discussions exploring the history of video game design and imagining what is in store for the future, from 3 p.m. to 6 p.m. in the museum’s McEvoy Auditorium. Nolan Bushnell, founder of Atari and a key player in the growth and popularity of the first video games, offers the keynote address at 7 p.m., which is followed by a screening of TRON (1982) at 8:30 p.m. in the museum’s Kogod Courtyard.

Saturday, March 17, features activities for all ages from 11:30 a.m. to 7 p.m. in the museum’s Kogod Courtyard, including live-action games with costumed characters by Spontaneous Art and a soundtrack by dj MKO; performances by 8 Bit Weapon, ComputeHer and The Triforce Quartet; hands-on craft activities; the opportunity to play a variety of classic and modern video games; and a photo booth where costumes are encouraged. Programs in the museum’s McEvoy Auditorium include a conversation with Hideo Kojima, video game designer best known for the Metal Gear series, at noon; a talk by Robin Hunicke, video game designer at thatgamecompany, at 5 p.m.; and a screening of the documentary The King of Kong: A Fistful of Quarters (2007) at 7 p.m., followed by a conversation with several of the participants. The activities in the courtyard are repeated Sunday, March 18, from 11:30 a.m. to 7 p.m.

A detailed schedule of all activities and links to live webcasts of all GameFest programs in the McEvoy Auditorium is available online, americanart.si.edu/taovg.

Additional programs include a concert by University of Maryland’s Gamer Symphony Orchestra, Sunday, April 29, at 3 p.m. in the museum’s Kogod Courtyard. The 21st Century Consort presents “Music of Games” Saturday, May 5, at 5 p.m., with a pre-concert lecture at 4 p.m.

“Video Games: Beyond Play,” a symposium that examines the changing roles of video games, consists of two panel discussions Friday, May 4, from 1 to 4:30 p.m. in the museum’s McEvoy Auditorium. The first panel, “Video Games at Work” from 1 to 2:30 p.m., is an in-depth look at how video games are revolutionizing areas such as health care, education, civics, journalism and national defense. Panelists include Asi Burak, co-founder of Games for Change; Brian Crecente, editor in chief of the video game blog “Kotaku”; James Paul Gee, the Mary Lou Fulton Presidential Professor of Literacy Studies at Arizona State University; J.C. Herz, author of Joystick Nation; Ben Sawyer, co-founder of Digitalmill Inc.; and moderator Constance Steinkuehler Squire, senior policy analyst with the White House Office of Science and Technology Policy. The second panel, “Game Change: Society and Culture” from 3 to 4:30 p.m., examines the impact of video games in the fields of academic research, science, art and education. Panelists include Hunicke; Richard Lemarchand, lead game designer at Naughty Dog; Eric Zimmerman, game designer, educator and co-author of Rules of Play; and moderator Colleen Macklin, associate professor of design and technology at Parsons the New School for Design. The symposium will be webcast live and archived on the museum’s website.

ABOUT THE SMITHSONIAN AMERICAN ART MUSEUM
The Smithsonian American Art Museum celebrates the vision and creativity of Americans with artworks in all media spanning more than three centuries. Its National Historic Landmark building is located at Eighth and F streets N.W., above the Gallery Place/Chinatown Metrorail station. Museum hours are 11:30 a.m. to 7 p.m. daily, except Dec. 25. Admission is free. Follow the museum on Twitter, Facebook, Flickr, iTunes and YouTube. americanart.si.edu.

Joe Kleimanhttp://wwww.themedreality.com
Raised in San Diego on theme parks, zoos, and IMAX films, InPark's Senior Correspondent Joe Kleiman would expand his childhood loves into two decades as a projectionist and theater director within the giant screen industry. In addition to his work in commercial and museum operations, Joe has volunteered his time to animal husbandry at leading facilities in California and Texas and has played a leading management role for a number of performing arts companies. Joe previously served as News Editor and has remained a contributing author to InPark Magazine since 2011. HIs writing has also appeared in Sound & Communications, LF Examiner, Jim Hill Media, The Planetarian, Behind the Thrills, and MiceChat His blog, ThemedReality.com takes an unconventional look at the attractions industry. Follow on twitter @ThemesRenewed Joe lives in Sacramento, California with his wife, dog, and a ghost.
Share
Facebook
Twitter
Linkedin
Email
Print
WhatsApp
Pinterest
ReddIt
Tumblr
Previous articleBlackpool Pleasure Beach 2012 Season Features New Twists on Shows and Attractions
Next articleHD Makeover of Spider-man Opens Next Week at Universal Orlando