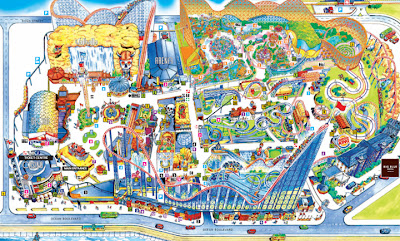 Blackpool, UK — The 2012 season is in full swing at Pleasure Beach Resort, Blackpool! Thrill-seeking rides, high dives and first birthdays are just a few of the attractions in store for the rest of the year.

Wow Weekends have been welcoming early thrill-seekers and there are more special offers available to everyone right throughout the season via http://www.pleasurebeachresort.com

There are even more attractions at Pleasure Beach this year.

While London is gearing up for the Olympics, the 42-acre park will be welcoming its own special troupe of Mexican Olympic high divers as part its new attractions.

La Quebrada will be bringing their unique show to the park in July at a purpose built arena in the shadow of the Big One.

Their performances have wowed audiences around the world with death-defying high dives from heights of up to 25 metres (81 feet), combining comedy, fire and Olympic dives. They will perform their first dive on July 16 through the season until September 2.

Closer to ground level a birthday celebration is being planned for SpongeBob SquarePants and his friends as they celebrate Nickelodeon Land’s first birthday on May 4.

Opened by Baywatch star David Hasselhoff last year, the £10.3m investment has been a huge hit with all age groups. It has 12 amazing rides including SpongeBob’s Splash Bash and Dora’s World Voyage plus many more.

When the rest of the park closes at 5pm, Nickelodeon Land will stay open until 7pm and wristbands for the attraction will be just £10 from 3pm on the day with a cake cutting ceremony at 4.30pm.

Hot Ice will celebrate its 75th production in 2012 when Entice will be skating its way on to the ice. With more than 30 skating stars from around the world, Entice will feature over 400 stunning costumes to mesmerising music, lasers and pyrotechnic effects. Hot Ice scooped “Best Show” at the Big E award in Las Vegas, a glitzy ceremony that recognises all that’s great in the world of big productions. A jaw-dropping illusion of the senses is promised with world-class performers taking to the ice for the show, which premieres on July 4, with matinee performances at 2.30pm, and evening shows at 7.30pm.

Also this year Pleasure Beach will see one of its most famous rides be treated to a transformation. The Revolution, the iconic looping rollercoaster, will go all industrial for a stunning new look.

Pleasure Beach managing director Amanda Thompson OBE said: “2012 is already going to be a memorable year with the Olympics and the Diamond Jubilee taking place. At Pleasure Beach we have our very own celebrations.We are really looking forward to welcoming the high divers to the park and I am sure they will be a huge success. Celebrating Nickelodeon Land’s first birthday will be fun and we are looking forward to the rest of 2012 being a huge success.”

Joe Kleimanhttp://wwww.themedreality.com
Raised in San Diego on theme parks, zoos, and IMAX films, Joe Kleiman would expand his childhood loves into two decades as a projectionist and theater director within the giant screen industry. In addition to his work in commercial and museum operations, Joe has volunteered his time to animal husbandry at leading facilities in California and Texas and has played a leading management role for a number of performing arts companies. Joe has been News Editor and contributing author to InPark Magazine since 2011. HIs writing has also appeared in Sound & Communications, LF Examiner, Jim Hill Media, and MiceChat. His blog, ThemedReality.com takes an unconventional look at the attractions industry. Follow on twitter @ThemesRenewed Joe lives in Sacramento, California with his fiancé, two dogs, and a ghost.
Share
Facebook
Twitter
Linkedin
Email
Print
WhatsApp
Pinterest
ReddIt
Tumblr
Previous articleASTM F24 Holds Two Days of Amusement Safety Meetings in Florida
Next articleSmithsonian Prepares to Open Landmark Exhibit on Video Games