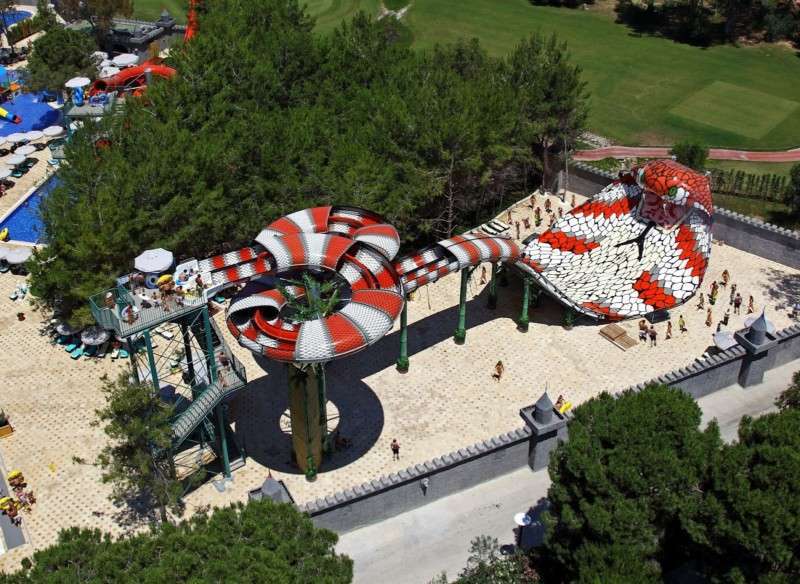 Polin brings their King Cobra waterslide to the US

ABOVE: The King Cobra slide allows guests to race side by side before splashing down towards the giant snake’s fangs. Courtesy of Polin.

The snake known as the King Cobra may not be native to the United States. But the kingsized serpent-themed waterslide from Polin Waterparks and Pool Systems (Istanbul, Turkey) slithered into a new home in Jackson, N.J this summer. Six Flags Hurricane Harbor opened the first US version of this slide, enticing guests with stomach-churning speeds and adrenalinepumping drops.

Polin’s supersized cobra version is no less threatening than the real one. Bold red, black and white scales provide an imposing veneer over the exterior and interior of the slide’s massive 50-foot (15.24-meter) height and 260foot (790-meter) length.

The core feature of King Cobra is its unique configuration that enables two riders to race along a circular path filled with twists, turns and surprises. Water pressure of 3,875 gallons (14,668 liters) per minute catapults riders through open and closed tubes before they brave a heartpounding plunge nearly 25 feet (8 meters) down a 50-degree slope. Along the way, riders accelerate to a maximum speed of 32 mph (51 km/h).

Alper Cetiner, Polin Project Manager, echoed Fitzgerald’s comments. “With so many special features, we expect the ride to be more successful than even anticipated.”

Polin installed the first King Cobra waterslide in Europe before exporting the massive attraction to Turkey and Russia. This year, in addition to the New Jersey installation, the company-which has designed, manufactured and installed waterparks in 80 countries around the globewill create new habitats for King Cobra in Asia, Europe and the Middle East. • • •

Joe Kleimanhttp://wwww.themedreality.com
Raised in San Diego on theme parks, zoos, and IMAX films, InPark's Senior Correspondent Joe Kleiman would expand his childhood loves into two decades as a projectionist and theater director within the giant screen industry. In addition to his work in commercial and museum operations, Joe has volunteered his time to animal husbandry at leading facilities in California and Texas and has played a leading management role for a number of performing arts companies. Joe previously served as News Editor and has remained a contributing author to InPark Magazine since 2011. HIs writing has also appeared in Sound & Communications, LF Examiner, Jim Hill Media, The Planetarian, Behind the Thrills, and MiceChat His blog, ThemedReality.com takes an unconventional look at the attractions industry. Follow on twitter @ThemesRenewed Joe lives in Sacramento, California with his wife, dog, and a ghost.
Share
Facebook
Twitter
Linkedin
Email
Print
WhatsApp
Pinterest
ReddIt
Tumblr
Previous articlemaking mammoth
Next articleLooking at LEGOLAND