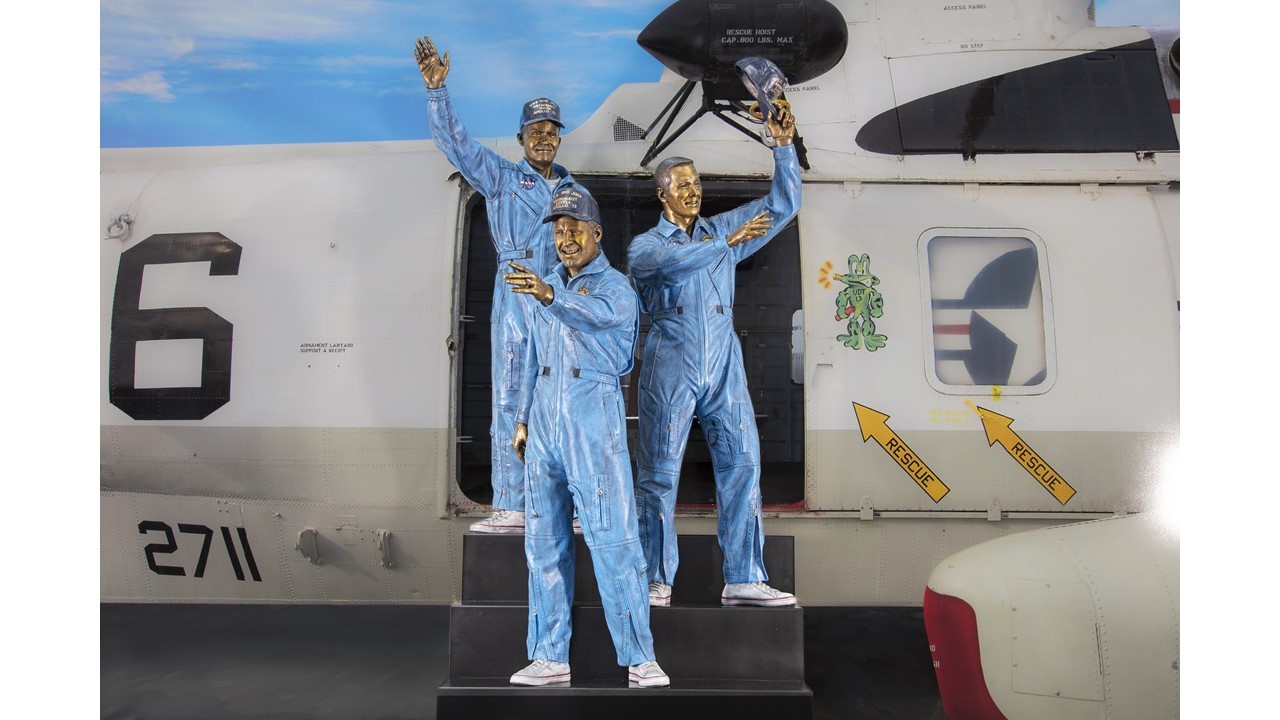 Space Center Houston’s spring break, presented by the city of Webster, explores the excitement of the Apollo-era and future missions to the Moon. See the newly installed one-of-a-kind, seven-foot bronze statue depicting the Apollo 13 astronauts, Jim Lovell, Jack Swigert and Fred Haise. The Apollo 13 sculpture is the center’s newest addition to Rocket Park as part of its NASA Tram Tour experience.

This spring break, visitors can explore the excitement of the Apollo program in the new immersive spring exhibit, watch a new space film on the center’s giant screen and take an in-depth tour of Space Center Houston in the new Space Expert Tour. The nonprofits spring break, March 12-21, provides visitors access to be a part of the NASA mission.

The new Apollo 13 bronze statue, by George and Mark Lundeen and Joey Bainer, depicts the safe return of Apollo 13 astronauts, Jim Lovell, Jack Swigert and Fred Haise the moment they stepped down from the recovery helicopter onto the USS Iwo Jima, a United States Navy assault ship. The sculpture’s placement at Space Center Houston serves to honor both the Apollo 13 astronauts and the flight controllers in Mission Control at NASA Johnson Space Center who worked around the clock for more than five days to ensure the crew’s survival and safe return. See the new sculpture along with the “Apollo 13: Failure is not an option” exhibit, presented by JSC Federal Credit Union, and the Apollo-era Saturn V rocket, one of only three Saturn V rockets on display in the world.

“Through our new Apollo 13 sculpture, we are educating the public how innovation, perseverance and true teamwork can achieve incredible success,” said William T. Harris, president and CEO, Space Center Houston. “We thank The Grainger Foundation of Lake Forest, Illinois for their generous contribution allowing this historic moment in space exploration to be shared with the world and inspire the next generation of explorers.”

Colorado-based sculptors and brothers George and Mark Lundeen, who brought this sculpture to life, are nationally known for their realistic bronze sculptures on display throughout the country. Notably, Mark created a monumental sculpture of Apollo 13 astronaut Jack Swigert placed in the National Statuary Hall of the U.S. Capitol Building in Washington D.C. Together, the sculptors recently created the sculpture titled “The Eagle has Landed,” portraying the three astronauts from Apollo 11, Neil Armstrong, Michael Collins and Buzz Aldrin, that was installed at Kennedy Space Center Visitor Complex in Florida. A Colorado native, Bainer has worked with the Lundeens on numerous projects including the Apollo 11 sculpture “The Eagle has Landed” at Kennedy Space Center Visitor Center Complex in Florida and the larger-than-life “Stations of the Cross” for The Cloisters on the Platte spiritual retreat near Gretna, Nebraska. Documentary filmmaker Steven C. Barber presented this unique project to the center and served as project advisor.

Launching this spring break, Space Center Houston welcomes visitors to experience new amenities at The Food Lab including a fully redesigned coffee bar (Grounds Control) and marketplace (The Market). The Market features a variety of individually packaged freshly prepared grab-and-go salads, sandwiches, hot entrees and snacks for a convenient, versatile and contactless shopping experience. Grounds Control, the fully remodeled modern coffee bar, offers a selection of espresso drinks and on-tap offerings highlighting local and regional roasters alongside a selection of all-day pastries and pressed sandwiches. Formally known as the Zero-G Diner and launching in late 2021, The Food Lab will be a new eatery experience, providing an elevated, mission-driven hospitality journey to visitors. Additional details will be revealed at a later date.

Open now through May 2, the center’s new spring exhibit, “Apollo: When We Went to the Moon,” honors the legacy of the Apollo-era through the eyes of the engineers and astronauts who lived through it. This touring exhibit co-produced by U.S. Space & Rocket Center and Flying Fish explores the triumphs of human space exploration from the beginning of the heated space race to the collaborative spirit of the International Space Station, and on to the next giant leap, a return to the Moon. Snap a selfie atop a lunar rover and imagine what it must have felt like to drive on the Moon. Observe intricate satellite, spacecraft, and rocket models, including Sputnik, Shuttle-Mir, and more.

Don’t miss the largest production ever filmed in space, “Space Explorers: The ISS Experience – Adapt,” now showing in Space Center Theater. It’s the first episode of an epic four-part immersive series that invites you to join eight astronauts on their life-changing missions aboard the International Space Station (ISS).

Space Center Houston is offering Clean Room Explorer Camps March 15-19. Inspired by NASA clean room procedures, the nonprofit offers Clean Room experiences for ages 6-18 to learn how NASA prepares for a mission in an immersive way while maintaining health and safety. Youth will take part in educational activities, tour the museum, watch live presentations and films; and go behind the scenes at NASA Johnson Space Center. Class sizes are limited to allow everyone to follow social distancing and sanitizing practices. Campers will learn about robots, rocketry and how astronauts live and work in space along with high-fidelity clean room safety procedures.

Explore the center before it opens to the public in the new Space Expert Tour. Visitors take a guided tour of some of our one-of-a-kind artifacts like the Apollo 17 command module, the Shuttle Carrier Aircraft NASA 905, and a SpaceX Falcon 9 rocket. These tours are limited to just 10 visitors at a time and last approximately one hour. The tours are offered daily and begin at 9 a.m. Space Expert Tour tickets are $69.95 and include general admission to Space Center Houston that same day.

Make it your mission to visit this spring break. Purchase a parking pass and an advance timed ticket at www.spacecenter.org. Prices range from $24.95 for children to $29.95 for adults, with discounts for seniors and members of the military. Become a member and come back free as often as you like for one year.