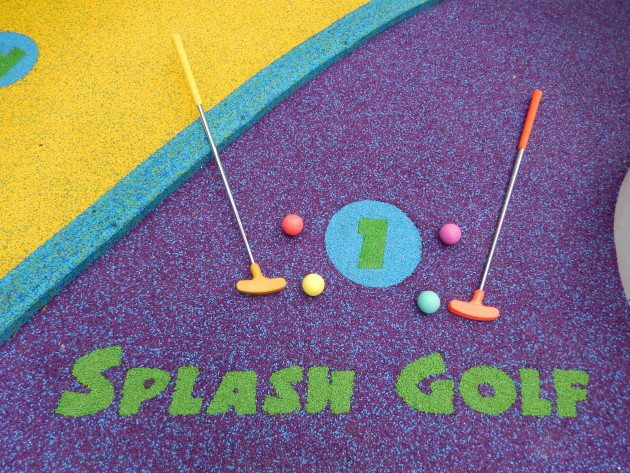 Traverse City, MI, USA – The first SplashGolf™ retrofit to an existing splash pad was installed in early October on Norwegian Cruise Line’s largest ship, Norwegian Epic in October, 2015.  Dubbed as a “water mini golf on a splash pad”, SplashGolf™ takes the players and game itself into an interactive water environment.

“We’re thrilled to install the first SplashGolf onboard Norwegian Epic. This exciting and interactive water activity is more inclusive of all family members, and not just toddlers, as the space was originally used,” states Scott Lundmark President, Adventure Golf Services.

The new SplashGolf will be part of the ship’s Aqua Park, which features two pools, five hot tubs, a kid’s pool and three multi-story water slides including the the 200-foot Epic Plunge, the only bowl slide at sea.

SplashGolf™ has taken Adventure Golf in unanticipated directions reveals Mike Arnold, Vice President Project Management.  “As we convert Norwegian Epic’s exisiting splash pad area into a five hole course, it’s clear that other retrofits, whether on land or sea, can feature customized course sizes depending on the space available. Norwegian Epic’s SplashGolf™ has the same special water effects that are used on the nine hole models where the players get wet and the miniature golf balls go in crazy directions.” 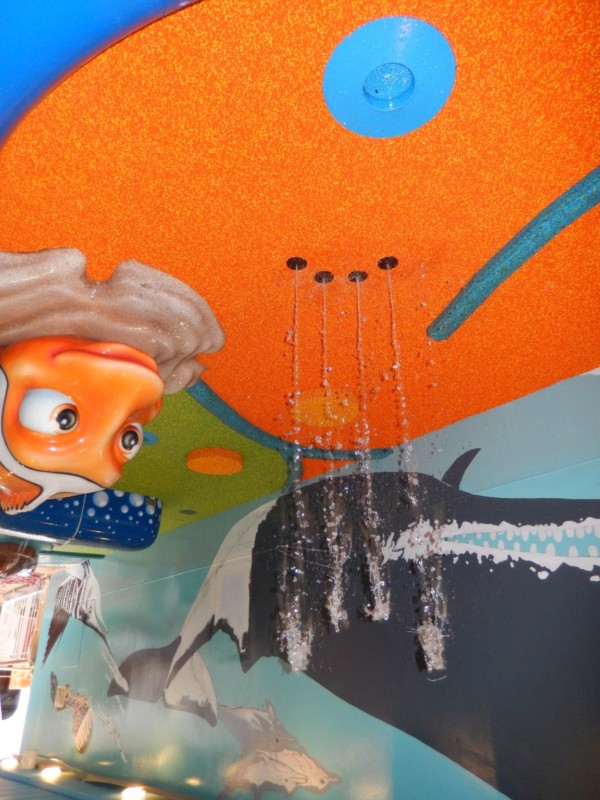 SplashGolf™ has undergone several design iterations as Adventure Golf developed a working model, according to Arne Lundmark CEO and chief designer. “This R & D work transferred over to all models.  One major issue was to create a new miniature golf ball that would respond to impact with water so the water can deflect it in other directions such as towards or away from the golf hole cup. This is not as easy as it seems.  Tradional miniature golf balls are basically solid objects, which easily pass through a water splash zone.

“The winner for SplalshGolf is a larger ball that is filled but floats.  It is light weight and comes in four vibrant colors.  To accommodate the larger ball our company has fabricated larger hole cups to make the game even more fun,” comments Lundmark.

The company’s next hurdle was to redesign certain fountain nozzles called “Side Shooters”, to create low horizontal sprays across the fairways and greens which impact the ball and pushes it in those directions.  Other water nozzles create sprays that are random,intermitant or all at the same time. This is the same concept as when a player tries to putt the ball through randomly spurting fountains and water features that blast your ball from side to side, help push it over a ramp or push the ball over to another part of the green.”

“SplashGolf™ is offered in three models: 5,800 SF for outdoor use; 2,800 SF for either indoor or outdoor applications; and a 2,800 SF model for cruise ships,” states Scott Lundmark president, Adventure Golf Services.

Joe Kleimanhttp://wwww.themedreality.com
Raised in San Diego on theme parks, zoos, and IMAX films, InPark's Senior Correspondent Joe Kleiman would expand his childhood loves into two decades as a projectionist and theater director within the giant screen industry. In addition to his work in commercial and museum operations, Joe has volunteered his time to animal husbandry at leading facilities in California and Texas and has played a leading management role for a number of performing arts companies. Joe previously served as News Editor and has remained a contributing author to InPark Magazine since 2011. HIs writing has also appeared in Sound & Communications, LF Examiner, Jim Hill Media, The Planetarian, Behind the Thrills, and MiceChat His blog, ThemedReality.com takes an unconventional look at the attractions industry. Follow on twitter @ThemesRenewed Joe lives in Sacramento, California with his wife, dog, and a ghost.
Share
Facebook
Twitter
Linkedin
Email
Print
WhatsApp
Pinterest
ReddIt
Tumblr
Previous article
PGAV Destinations Publishes Study on Brand Destinations
Next article
Electrosonic Takes Alcorn McBride on Journey Down Inka Road