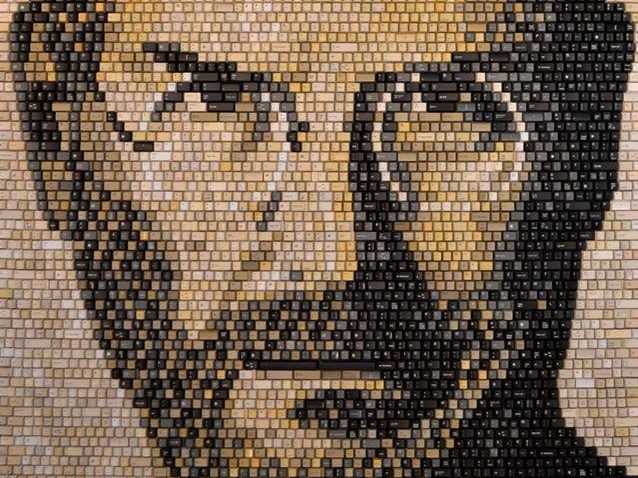 Orlando, FL, USA — Ripley’s Believe It or Not! has acquired another  “key” piece for its unbelievable collection of oddities – a portrait of Apple co-founder Steve Jobs made entirely from computer keys.
Creating this piece was no small feat; the portrait measures nearly 7′ by 4′ and contains almost 6,000 computer keys (5,892 to be exact).   The portrait was made by Orlando artist Doug Powell, who spent more than 200 hours creating it. Powell amassed the computer keys by going to garage sales, putting ads on Craigslist and finally discovering a collection center full of discarded keyboards.

Powell had to hose down each keyboard, pry off each key and grind the post off the back. The keys were then sorted by color – black, brown, gray, yellow and shades of off-white. In creating Jobs, he started with the eyes and worked his way up and out from there.

The portrait even contains hidden words – Macintosh, Apple, Pixar, iTunes – as well as a couple of Steve Jobs quotes.
Powell says of his creation: “Steve Jobs said it best when he said, ‘I want to put a ding in the universe.’  I want the viewer to ponder the infinite, profound combination of thoughts, ideas and inspirations that have surely passed through this ‘intellectual porthole,’ and all made possible
with just the common computer key.”

“Ripley’s has several of Doug’s mosaics in our museums, some made from jigsaw puzzle pieces and some from computer keys,” said Edward Meyer, Ripley’s VP of Exhibits and Archives. “I think this is his best work yet, as it’s such a large portrait and it captures Steve Jobs perfectly. He really looks like he is staring right at you.”

The portrait is currently at Ripley’s corporate headquarters in Orlando, and will eventually go on display in one of Ripley’s attractions around the world.

Joe Kleimanhttp://wwww.themedreality.com
Raised in San Diego on theme parks, zoos, and IMAX films, InPark's Senior Correspondent Joe Kleiman would expand his childhood loves into two decades as a projectionist and theater director within the giant screen industry. In addition to his work in commercial and museum operations, Joe has volunteered his time to animal husbandry at leading facilities in California and Texas and has played a leading management role for a number of performing arts companies. Joe previously served as News Editor and has remained a contributing author to InPark Magazine since 2011. HIs writing has also appeared in Sound & Communications, LF Examiner, Jim Hill Media, The Planetarian, Behind the Thrills, and MiceChat His blog, ThemedReality.com takes an unconventional look at the attractions industry. Follow on twitter @ThemesRenewed Joe lives in Sacramento, California with his wife, dog, and a ghost.
Share
Facebook
Twitter
Linkedin
Email
Print
WhatsApp
Pinterest
ReddIt
Tumblr
Previous article
Jack Rouse Associates to Provide Final Design For New Childrens Museum in Sioux City
Next article
Audubon Zoo Elephant Panya Celebrates 50th Birthday