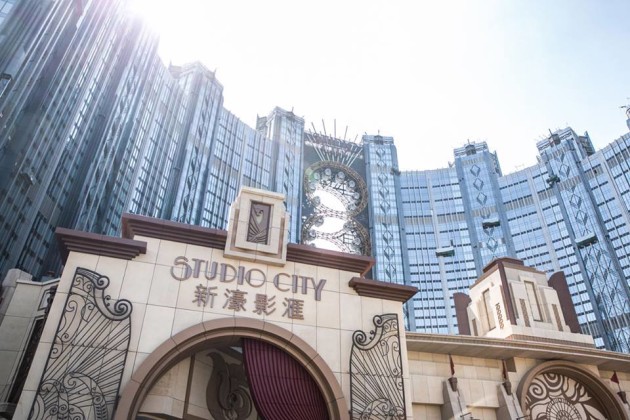 Envisaged by Mr. Lawrence Ho as “Asia’s Entertainment Capital,” Studio City’s Hollywood-inspired, cinematically-themed concept and world-leading entertainment, hotel, retail, Food and Beverage and gaming offerings have been tailored to specifically appeal and cater to the desires and aspirations of the vast and rapidly growing numbers of dynamic Asian and international leisure destination thrill-seekers.

“Today marks the start of a new era of leisure destination entertainment for Macau and Asia,” said Melco Crown Entertainment’s Co-Chairman and CEO Mr. Lawrence Ho. ‘It is the realization of our long-held vision to develop a leisure and entertainment destination that has no equal in Macau.” 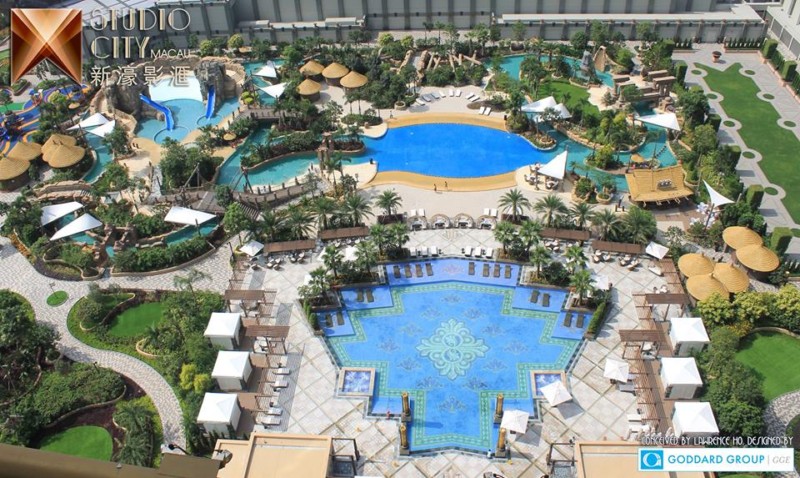 “The opening of Studio City stands testament to Melco Crown Entertainment’s commitment to help to evolve and greatly enhance Macau’s non-gaming entertainment proposition as we continue to work towards our strategic aim in supporting its evolution into a highly-diversified and world-leading leisure and tourism destination.

“I would like to thank all of our Studio City colleagues who are working so hard to make this incredible resort a stunning, successful reality. Together, we are now ready and eager to deliver a truly remarkable world-class leisure destination experience for our visitors to Macau.  We also gratefully acknowledge the support of the Central and Macau governments in our ambition to help develop Macau into a world center of leisure tourism.”

Mr. James Packer, Co-Chairman of Melco Crown Entertainment, added: “I am delighted to be here with Lawrence for this momentous occasion, to celebrate the opening of this magnificent destination resort.

“Studio City, with an array of world-firsts entertainment attractions, is set to earn its place as an internationally recognized leisure destination, enhancing Macau’s tourism appeal on the world stage.

“Today’s grand opening is a key step in our strategic vision of providing a world class portfolio of leisure and entertainment resort experiences that meet the rapidly evolving demands of Asian and international leisure visitors.” 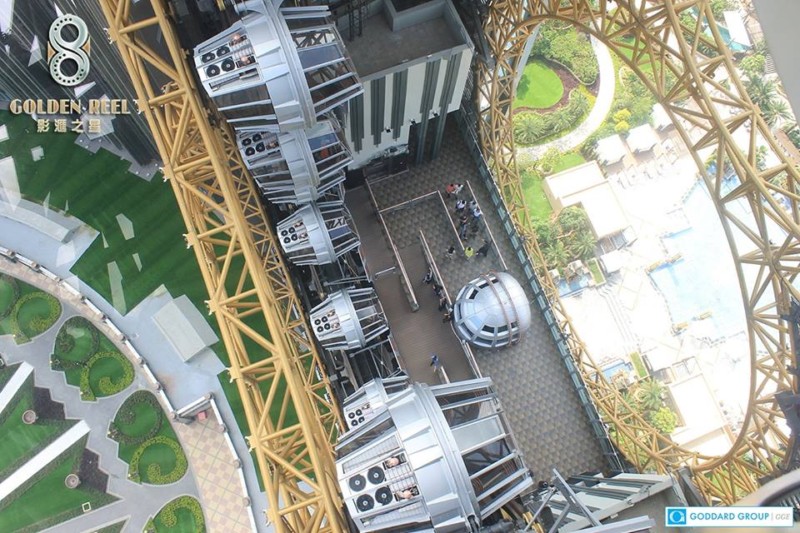 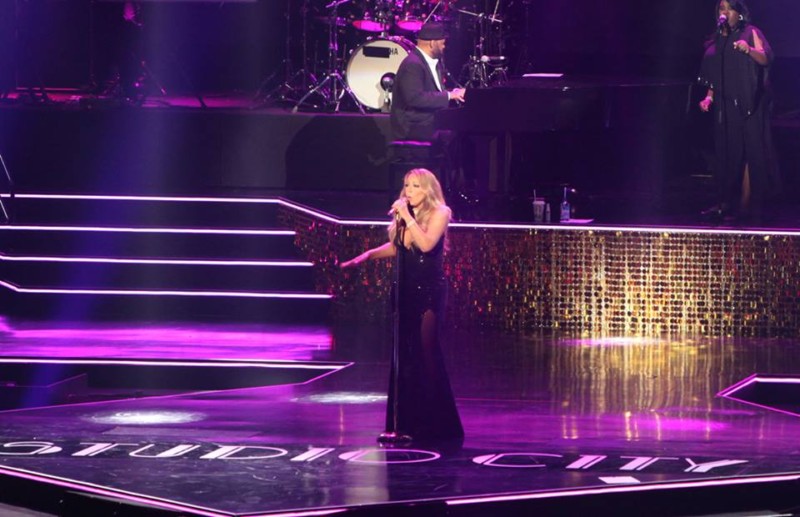 Electrifying entertainment will be combined with an exciting array of accommodation at the approximately 1,600-room Studio City Hotel, delivering ‘movie-star’ service in the prestigious suites of ‘Star Tower’ and premium ‘Celebrity Tower’. Studio City also offers an incredibly diverse range of international restaurants, cafes and relaxed bars and lounges with over 30 food and beverage venues located throughout the property.

The Boulevard at Studio City delivers the region’s most unique and innovative experiential 300,000 sq. ft. ‘immersive’ retail environment. It brings the world’s best shopping to life in Macau by transporting guests to high-energy street-scapes, with both live and hi-tech entertainment enchanting them at every turn. Its streets and squares are inspired by iconic shopping and entertainment locations, including New York’s Times Square and Hollywood’s Beverly Hills. 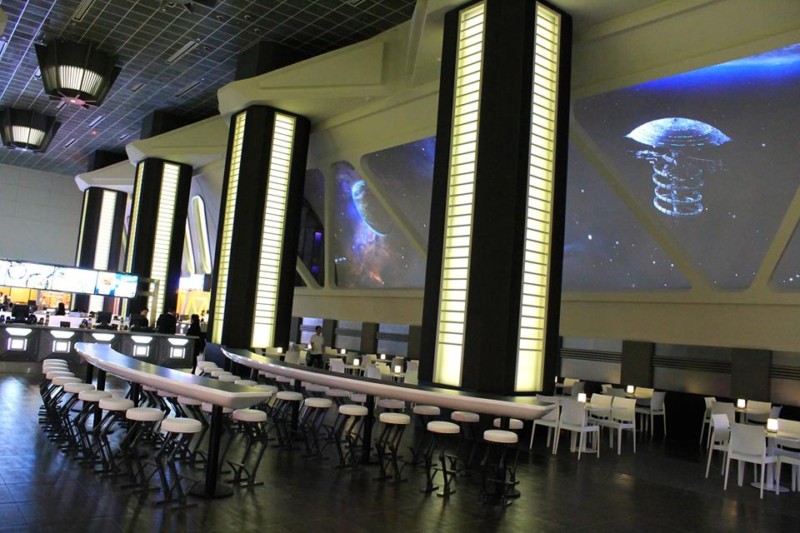 Studio City is located in Cotai, Macau, close to the Lotus Bridge immigration point which connects with Hengqin Island, and a future station-point for the Macau Light Rapid Transit. This Hollywood-themed studio-concept resort is the Asia’s Entertainment Capital.[/tab]
[tab title=”Click tab for MASTER PLANNING BY GARY GODDARD GROUP“]Hollywood, CA, USA (October 29, 2015) – Gary Goddard, Chairman/CEO of Goddard Group, a world leader in the design, master planning, development and production of major integrated resorts and destination theme parks worldwide, has just added his latest mega-destination project to the company’s portfolio – a major new $ 3.2 billion casino and resort project called Studio City – which opened to the public on October 27, 2015. With Goddard Group acting as the lead design firm, and Leigh & Orange as the Architect of Record, the two firms have jointly created a new resort that is sure to stand the test of time.

Mr. Goddard was in attendance during Grand Opening Ceremonies on 10/27/15 for the new Studio City in Macau, which also featured appearances from such notable celebrities as Robert DeNiro, Leonardo DiCaprio, Martin Scorsese, and Mariah Carey.

“Because we share a unified vision when it comes to Hollywood and the world of motion pictures, our cooperation with the Studio Citymanagement team was highly productive, resulting in one of the most exciting, dynamic and architecturally stunning integrated resorts ever created, not only in Macau, but in the world,” said Mr. Goddard. “Now that the doors have opened for the first time, with its art deco inspired towers and the spectacular Golden Reel at its center, we fully expect this new resort to become instantly iconic, capturing the imagination of the international audience. This memorable new symbol for Macau will be seen in newspapers, blogs, social media and television news around the world.”

Building upon Mr. Lawrence Ho’s vision for a resort inspired by the world of motion pictures, Goddard worked closely with Mr. Ho to ensure the Studio City project would be completely unique and apart from anything else in Macau, Hong Kong, or anywhere else on the planet. With 1,600 rooms, this multi-billion dollar project is destined to become the new iconic ‘Must See & Must Experience’ resort casino in Macau.

“The design for Studio City is so fantastic, that not only will it draw visitors from Macau, I believe it will also act as a magnet for visitors staying in Hong Kong and in cities throughout China who might not otherwise have planned a visit to Macau,” Goddard adds.

Studio City offers visitors a ‘next generation’ of outstanding leisure destination experiences designed to enhance and establish the territory as a truly international tourism center. Ideally located in Cotai, close to the Lotus Bridge immigration point (which connects Hengqin Island with a future station for the Macau Light Rapid Transit – LTR,) Studio City delivers more world-class entertainment amenities than any other integrated resorts in Macau. 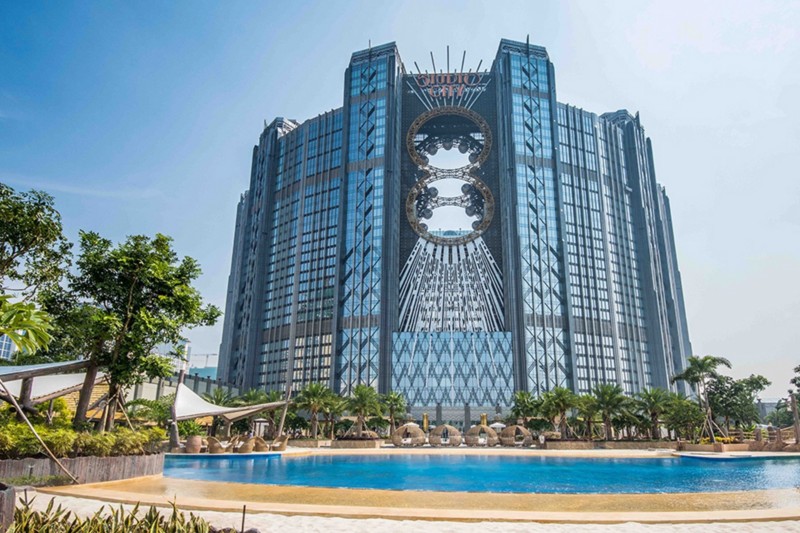 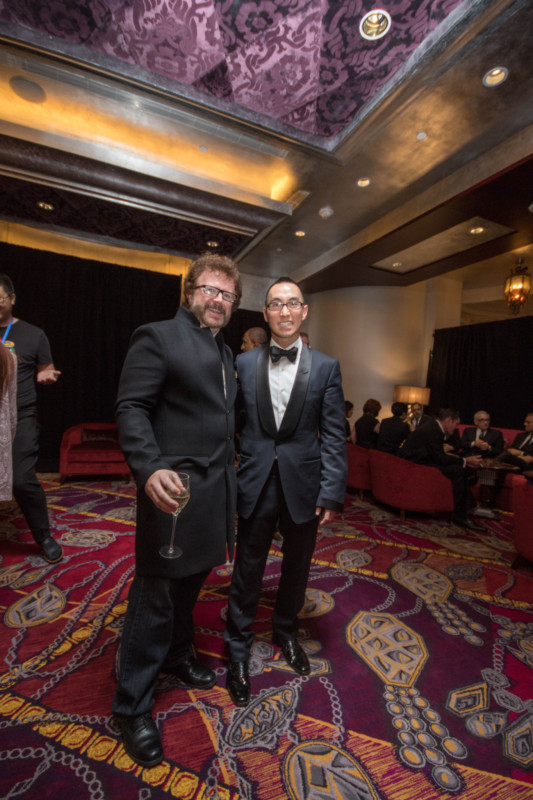 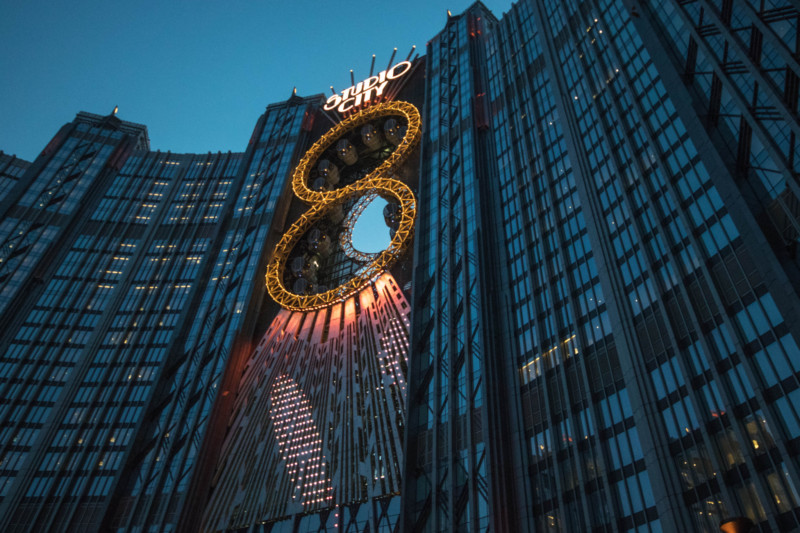 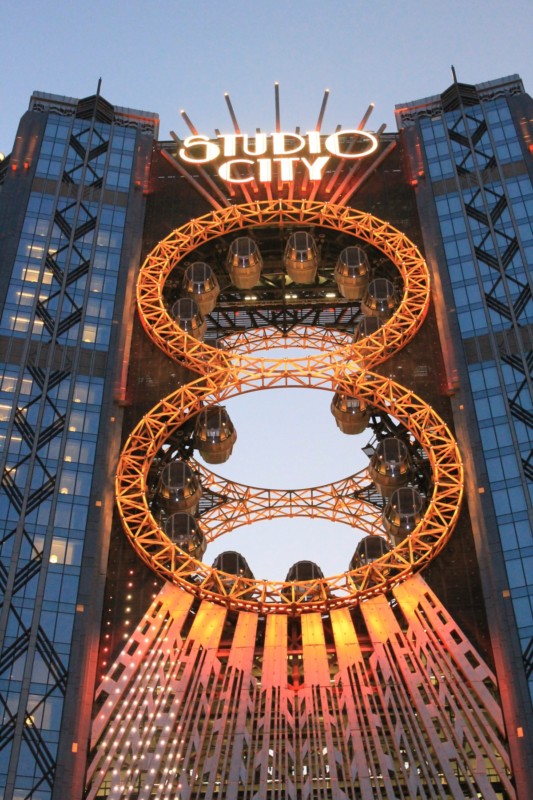 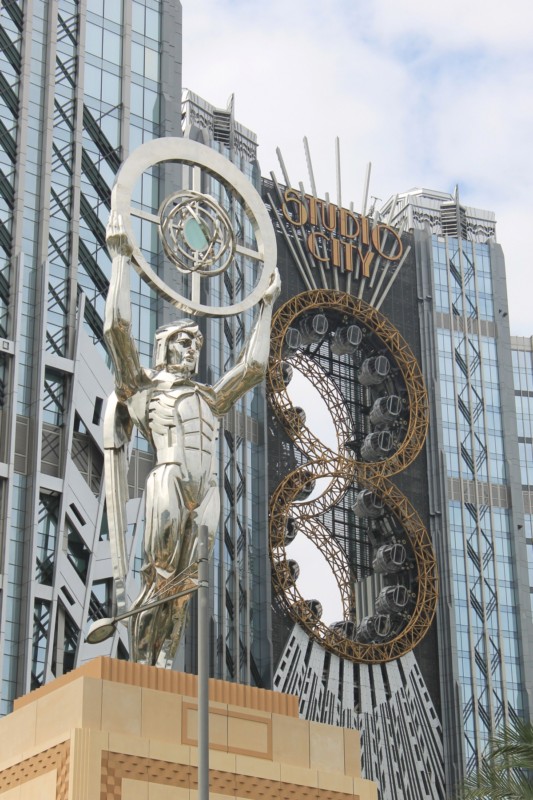 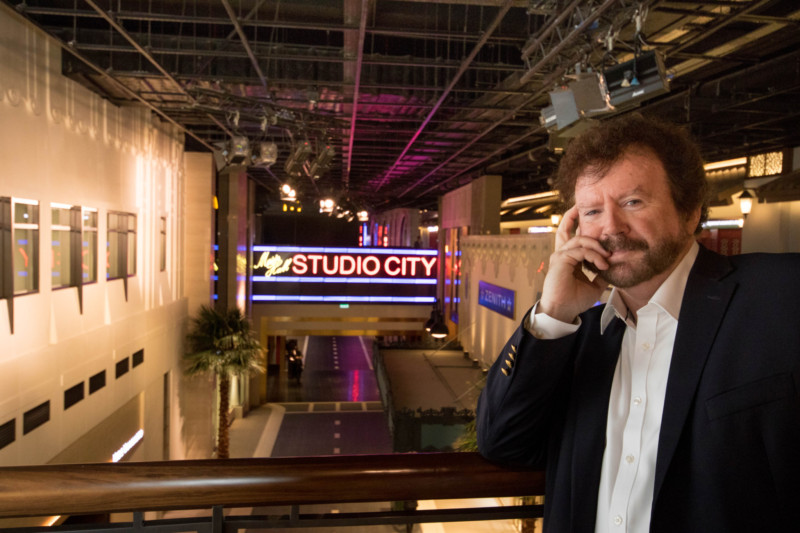 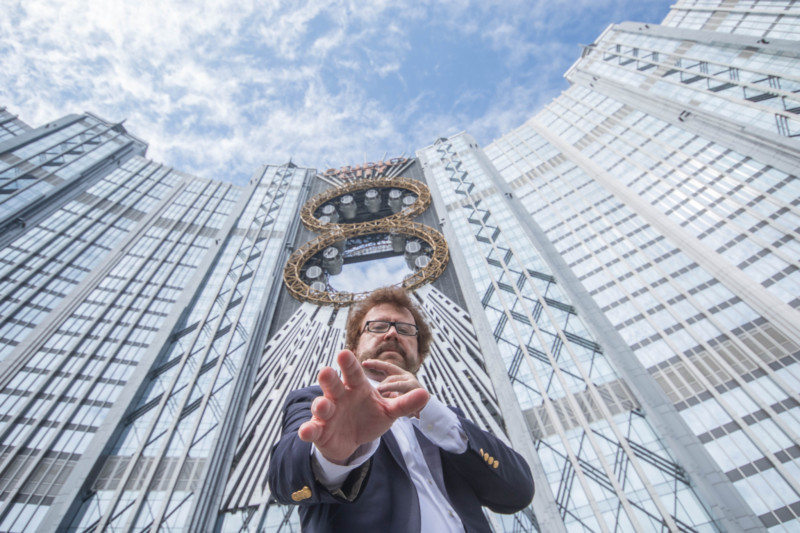 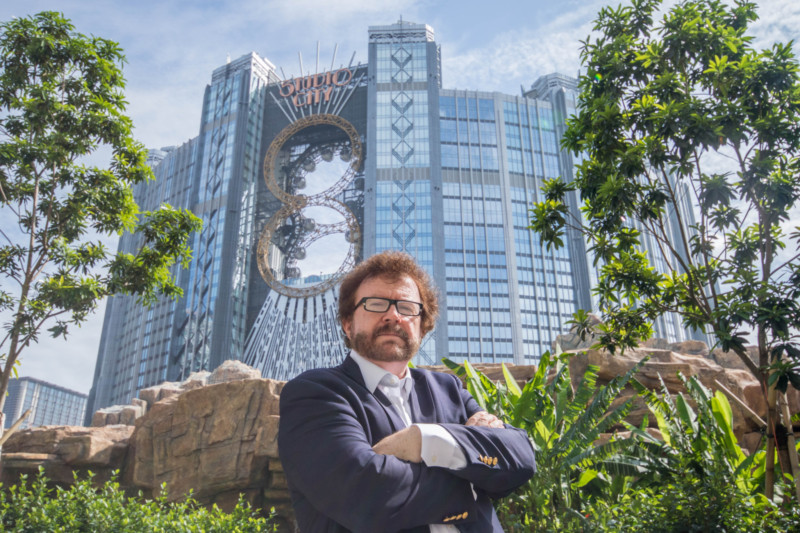 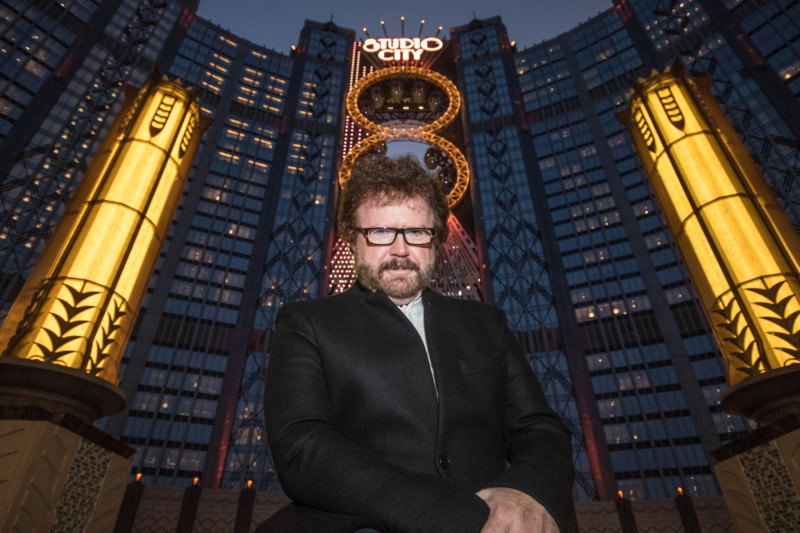 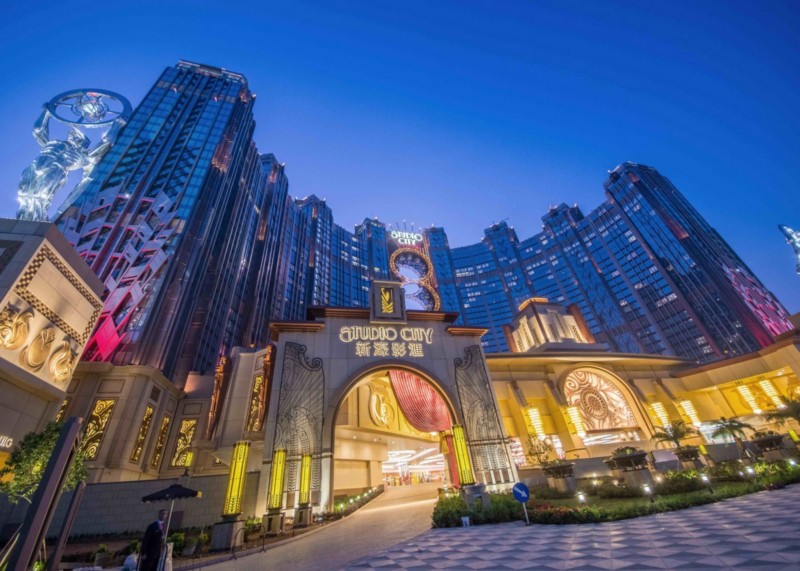 “This is an extraordinary facility. Studio City Macau will immediately become one of the world’s premium tourist destinations,” stated Guy Nelson, Dynamic Attractions President and Empire Industries CEO. “We’re proud our Dynamic Flying Theatre is Studio City’s cornerstone attraction. The range of motion delivered by the Dynamic Flying Theater is a perfect complement to the “Batman, The Dark Flight” adventure, bringing to life an exhilarating guest experience like no other attraction available.”

The red carpet Grand Opening was attended by a number of stars, including Leonardo DiCaprio, Robert De Niro and Mariah Carey. The 1,600 room resort also has a casino, a figure eight Ferris wheel, a 300-seat magic theatre, and ‘Warner Bros. Fun Zone.’ 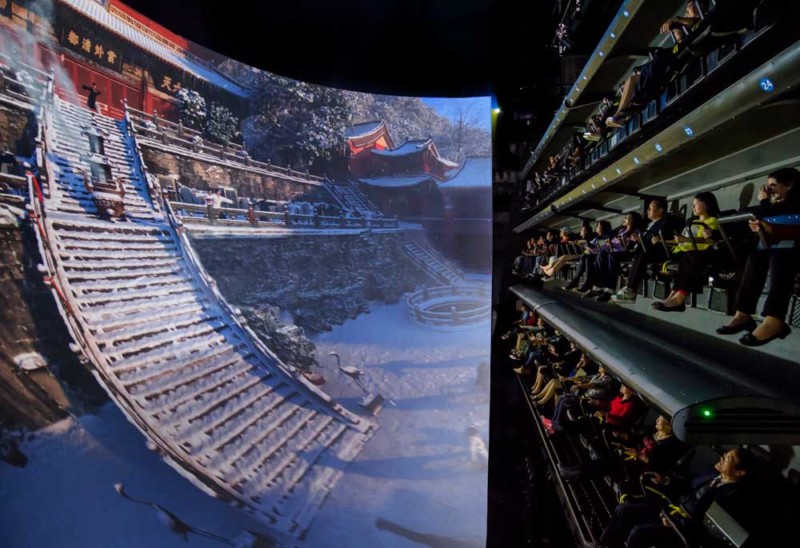 The attraction has the latest 4D flight simulation technology and unmatched visual graphics. The multi-sensory ‘ride’ makes guests feel as if they are flying through Gotham City in the Batplane and racing through the streets in a high-speed car chase.

[tab title=”Click tab for FRANZ HARARY’S “HOUSE OF MAGIC” NOW OPEN“]Hollywood, CA, USA (November  2, 2015) – Discovered by superstar Michael Jackson at the age of 20, FRANZ HARARY is today one of the most famous, successful, and internationally acclaimed magicians and illusionists working anywhere on the Planet. Harary has performed live on every continent of the globe, before millions of fans.

Harary, who lives in Hollywood, CA, has just launched his biggest trick yet – Franz Harary’s “House of Magic,” an unprecedented, $40-million attraction which opened to the public on October 27, 2015 and which is permanently housed within the brand new “Studio City,” a $ 3.2 billion hotel and casino resort complex located on the Cotai Strip in Macau, China (Asia’s “Las Vegas.”)

Franz Harary’s “House of Magic” is the largest, most expensive, and most technologically sophisticated, permanent Magic Show in world history. Says Harary, “We expect that the ‘House of Magic’ will become to Magic what Hollywood has long been to Movies.”

Harary’s “House of Magic,” which he personally designed and where he will perform his award-winning “Mega Magic” show on a year-round basis, is a state-of-the-art theatrical venue comprised of four live performance theatres. There, Harary, along with a rotating list of Top Magicians from every corner of the globe, will enthrall millions of fans from around the world. “House of Magic” attendees witness an array of mind-bending, never-before-seen magic experiences, illusions that Harary has prepared exclusively for this site.

Regarding his new venture, Harary said, “During the course of the past 30 years, my magic has literally taken me around the planet and has introduced me to the world’s greatest illusionists. I am thrilled that I have the opportunity now, with ‘House of Magic,’ to bring those incredible wizards to Macau, where they can showcase their art in a place designed to let their magic shine. I am delighted to have created the ‘House of Magic ‘at Studio City— the most advanced magic venue on Earth, and a theatrical setting sure to become the premier performance destination for magicians globally!” 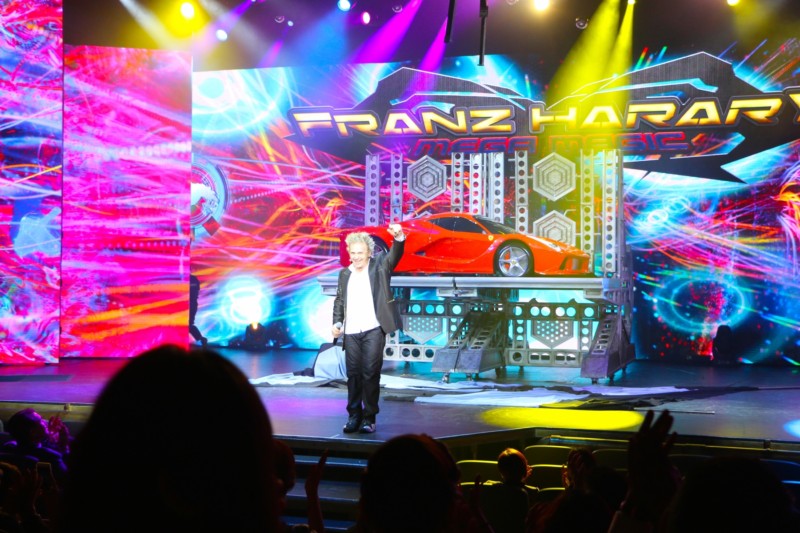 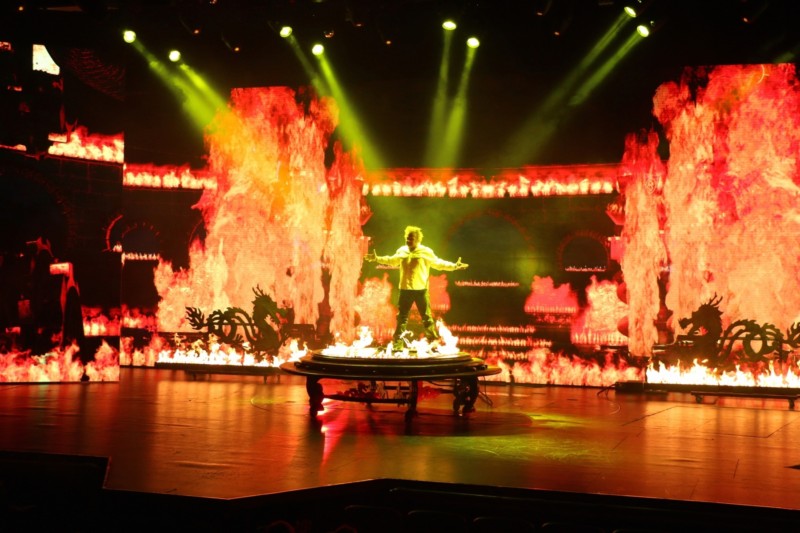 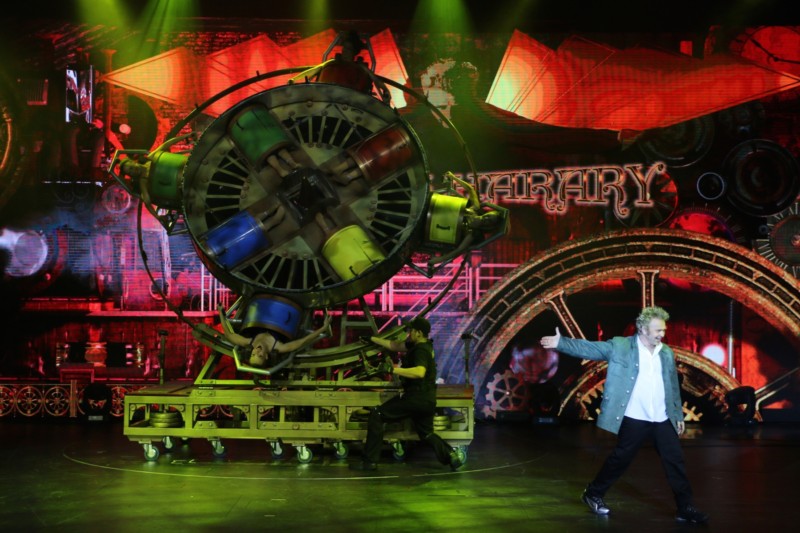 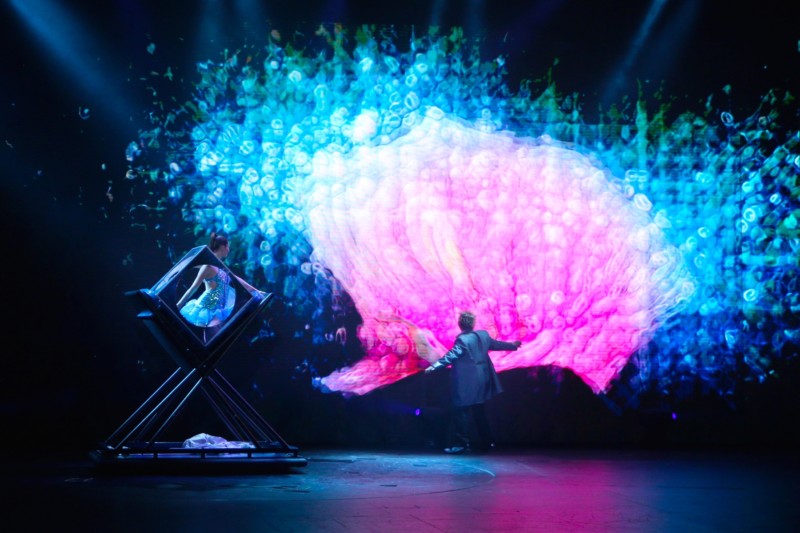 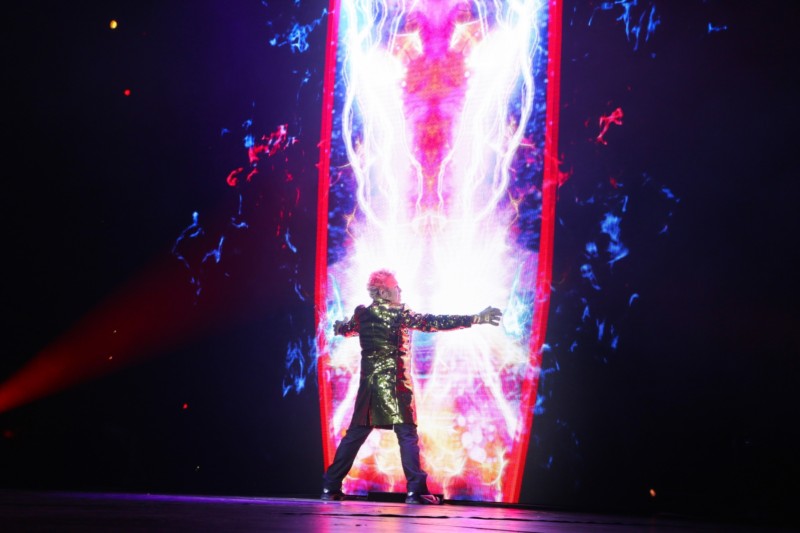 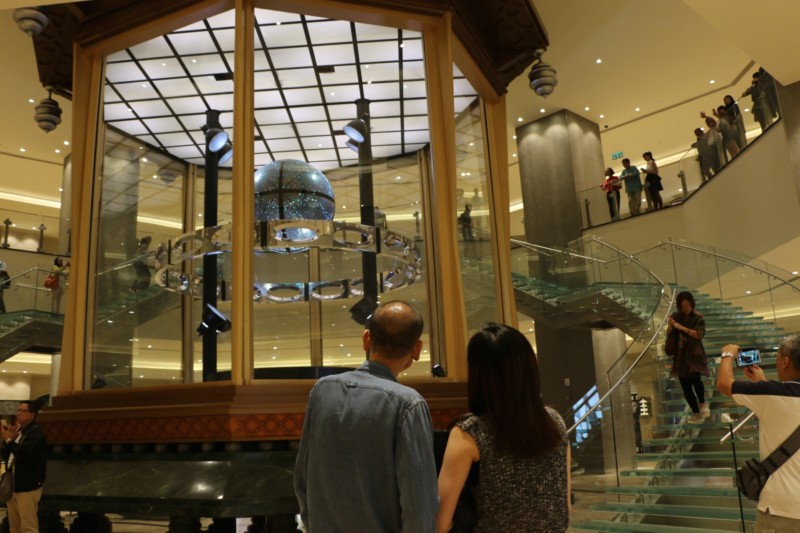 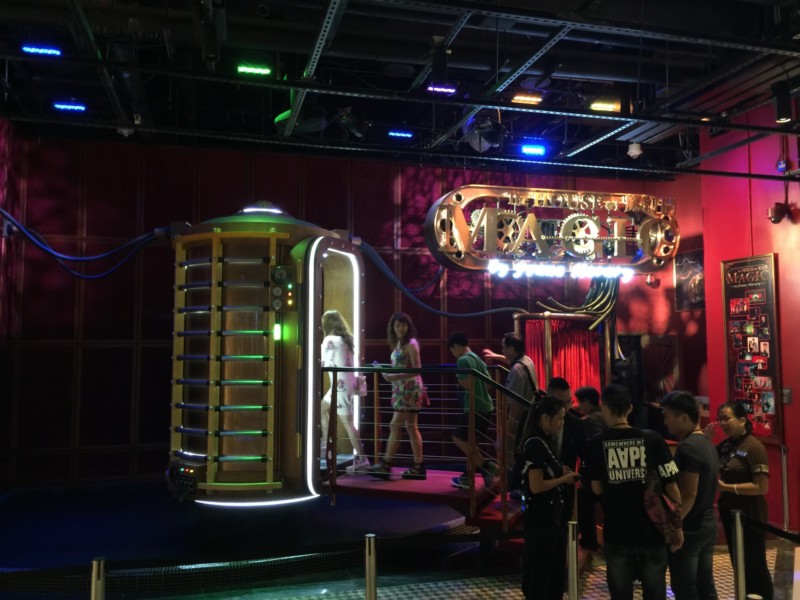 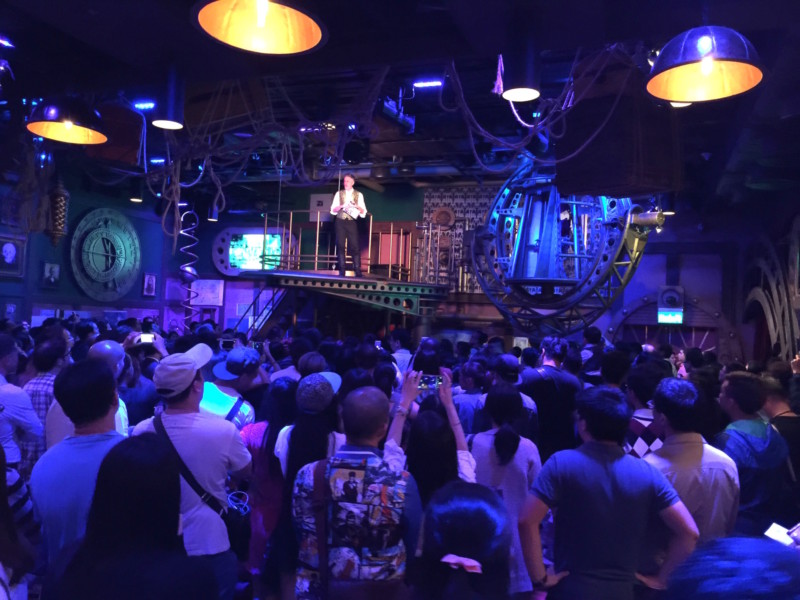 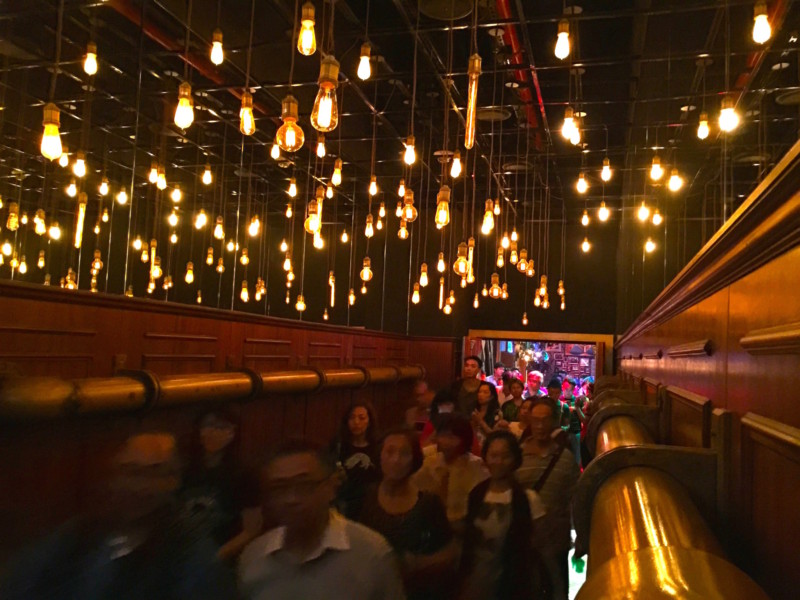 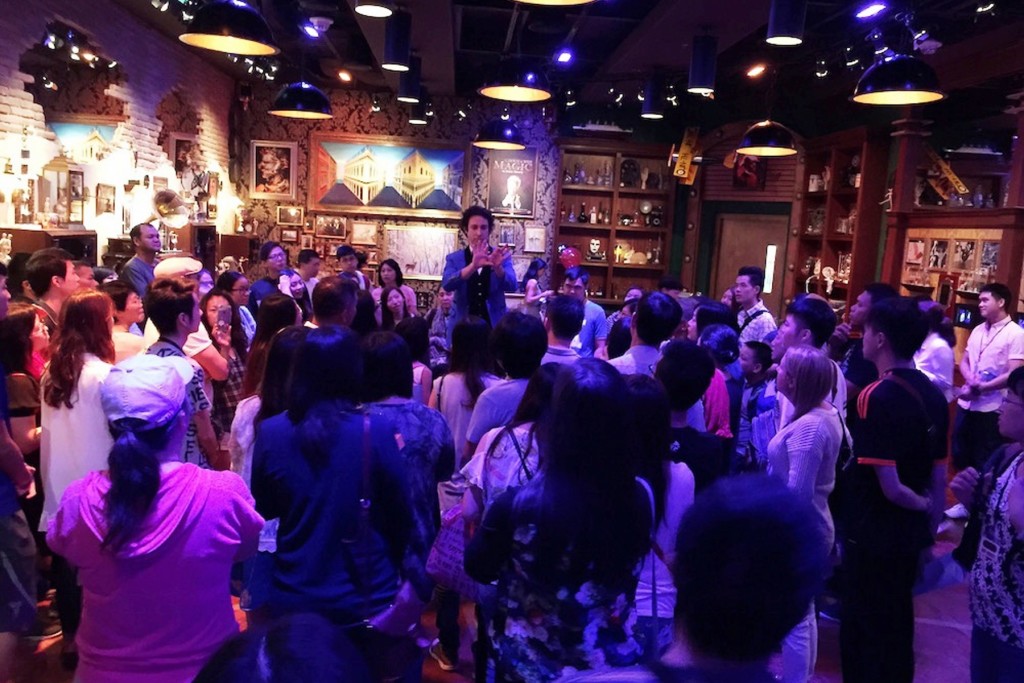 Joe Kleimanhttp://wwww.themedreality.com
Raised in San Diego on theme parks, zoos, and IMAX films, Joe Kleiman would expand his childhood loves into two decades as a projectionist and theater director within the giant screen industry. In addition to his work in commercial and museum operations, Joe has volunteered his time to animal husbandry at leading facilities in California and Texas and has played a leading management role for a number of performing arts companies. Joe has been News Editor and contributing author to InPark Magazine since 2011. HIs writing has also appeared in Sound & Communications, LF Examiner, Jim Hill Media, and MiceChat. His blog, ThemedReality.com takes an unconventional look at the attractions industry. Follow on twitter @ThemesRenewed Joe lives in Sacramento, California with his fiancé, two dogs, and a ghost.
Share
Facebook
Twitter
Linkedin
Email
Print
WhatsApp
Pinterest
ReddIt
Tumblr
Previous articleUAE Celebrates National Day at EXPO Milano as It Prepares to Host Expo 2020 Dubai
Next articleAl Ahli Holding Group to Build Rethink-Designed 20th Century Fox World Theme Park and Resort in Dubai