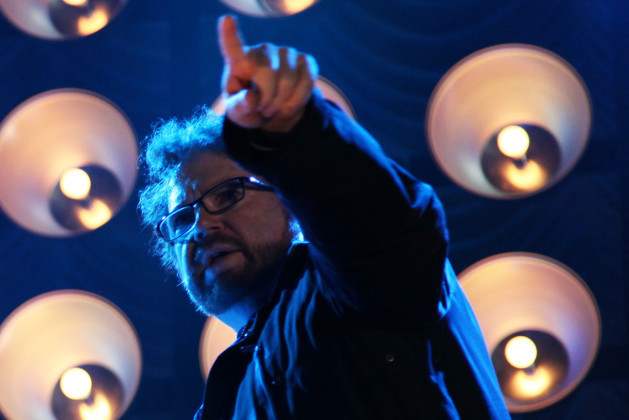 From Cirque to China, The Goddard Group keeps on going

[dropcap color=”#888″ type=”square”]T[/dropcap]here’s always a lot going on at Gary Goddard’s design firm, The Goddard Group/GGE. Here, InPark reports on the new joint venture between GGE and Cirque du Soleil, about other GGE Asian projects recently open and in the pipeline, and about Goddard’s pioneering creative work over the course of some four decades in the attractions industry.

“Many people around the world credit Cirque du Soleil for reinventing the circus,” said Martin Boudreau, President of Cirque du Soleil Parks, Immersive Attractions and New Content division. “In our new joint venture, 4th Wall, the combined vision of Cirque and the unique talents of Goddard Group (GGE) come together.” And they promise to take a completely new look at theme parks with this new phase of worldwide expansion.

“We now have the opportunity to apply our creativity to other entertainment mediums, bringing to them the signature Cirque du Soleil elements of imagination and originality that spectators have come to expect from us,” said Boudreau. According to Gary Goddard (Chairman and CEO of GGE), 4th Wall will open the first Cirque du Soleil theme park in Puerto Vallarta in 2018 or 2019, as part of a destination resort. GGE is working with Cirque and Mexican tourism developer Grupo Vidanta on designs for the projects.

The plan for what Goddard describes as an “experience park” includes a unique, Cirque-inspired boat ride, a series of highly immersive attractions, including the kind of outdoor live show only Cirque could create. Food and beverage together with retail offerings will likewise be customized. The park will be geared to an older audience (while including appeal for families with children) and have international appeal, although most guests are expected to be from Mexico, the United States and Canada.

Goddard likens the concept to something more resembling Discovery Cove than Disneyland. But then he draws another comparison: “If there were a waterpark created by Cirque for Burning Man, it would probably look like this.” The elements, especially water, and natural vegetation will be important in creating a unique environment that will feature live performers in many settings and impart the sense of having come upon a hidden village in an enchanted forest.

Taylor Jeffs, GGE Director of Design, says the larger part of the park is designed around the night and will only open at sunset, with about 70% of the park best enjoyed at night, making it an inviting choice for the many tourists who spend the day at nearby Puerto Vallarta and the beach.

And beyond Mexico? Goddard is not yet in a position to divulge details of location, timeline etc. for other Cirque theme parks on the drawing board. However, we can try to guess. The news of Cirque du Soleil’s pending acquisition by two private investors (TPG and Fosun) intending to launch and expand the brand in China, added to the facts that GGE is already very active in that part of the world, and that China is much, much larger than Las Vegas and has an audience inclined to love theatre and acrobatics, leads us to suppose that we may soon be hearing of at least one new Cirque theme park planned for China.

Lotte World is a major theme park open in Seoul, Korea since 1989 and attracting between 5 million and 7 million visitors annually. A strategic creative partnership between Lotte World and GGE resulted in a total of eight new projects opened in 2013-2014 and helping to celebrate the park’s 25th anniversary. 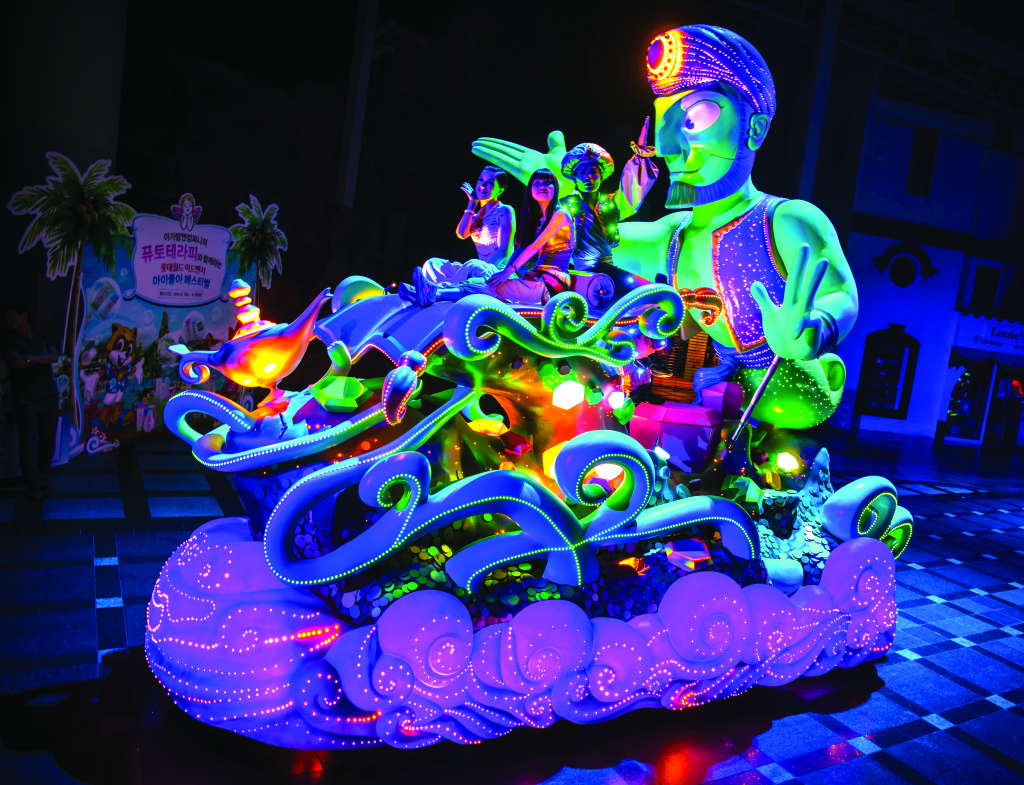 Goddard said, “Our firm created the concept and design and then turn-keyed the entire project (other than casting performers).” The parade takes place indoors, in a large atrium and the designers made use of the aerial space with GPS-programmed flying balloons (technically not drones, but similar) with lantern bases, that are programmed to move in choreographed synchronization to the music, changing form and color on cue. 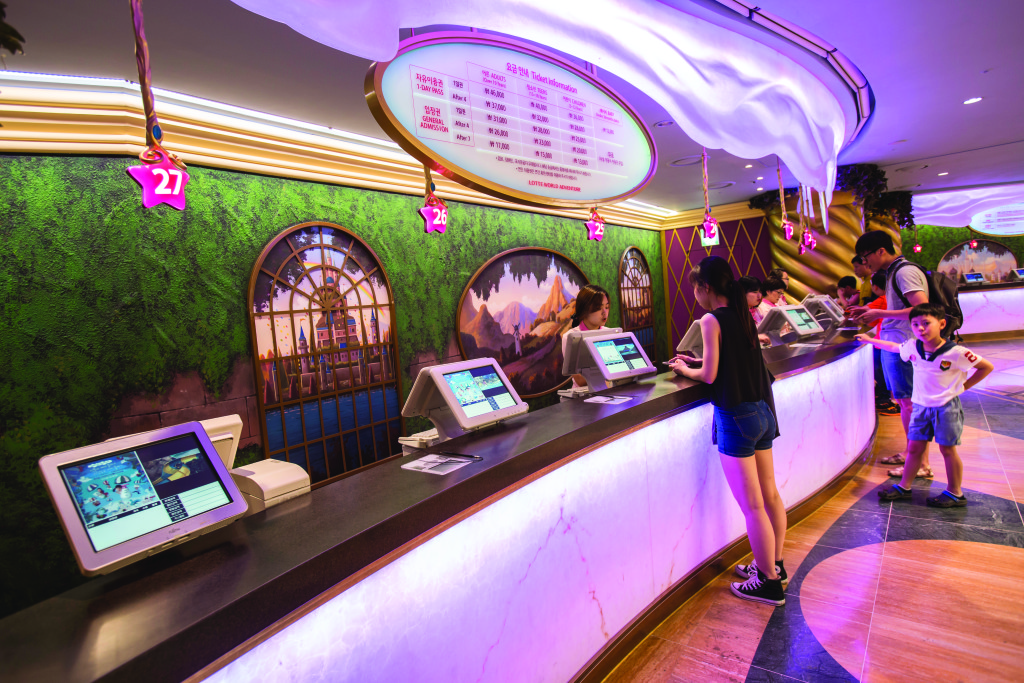 The 3,500 square meter Lotte World Welcome Center replaced the park’s original entry which hadn’t been materially updated since 1989. Traditional ticket booths were discarded in favor of long desks, which make the experience similar to that of a luxury hotel check-in. “A park’s entrance touches literally every single guest,” said Jeffs, “and our new design has received highly positive feedback from Lotte World’s guests.” 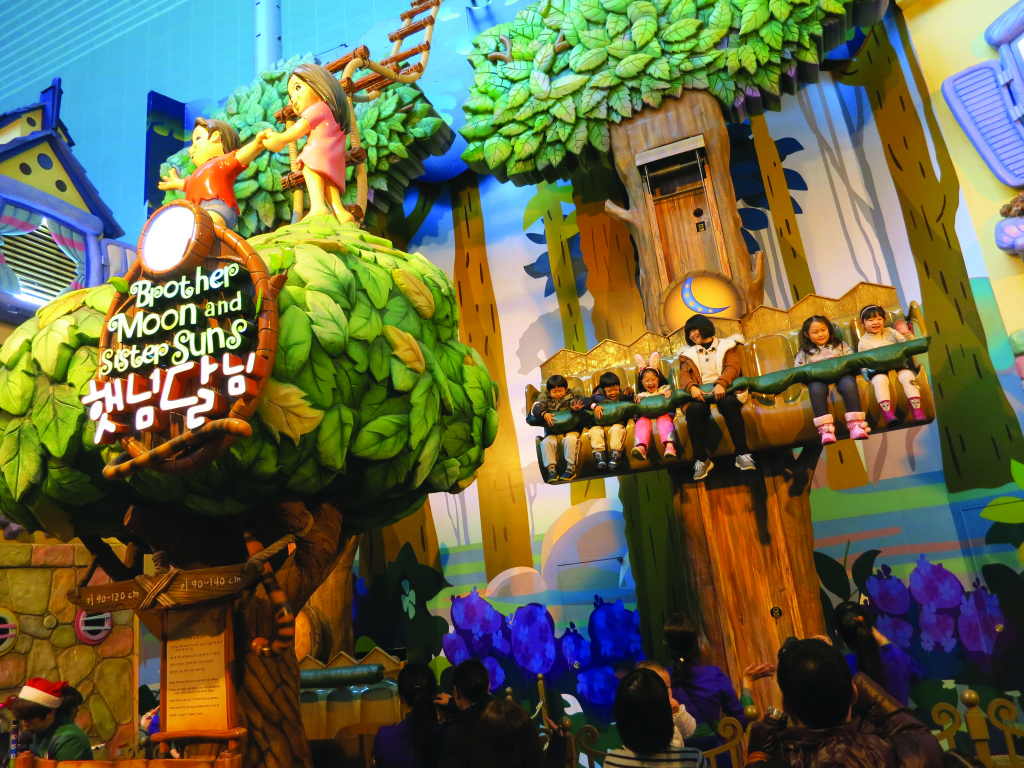 Riders of this new attraction experience the climactic moments of a popular Korean fairy tale in which a brother and sister are chased into the sky by a ferocious tiger. The design team for this attraction included Christopher Smith and Phil Mendez. Ride system: S&S Worldwide. 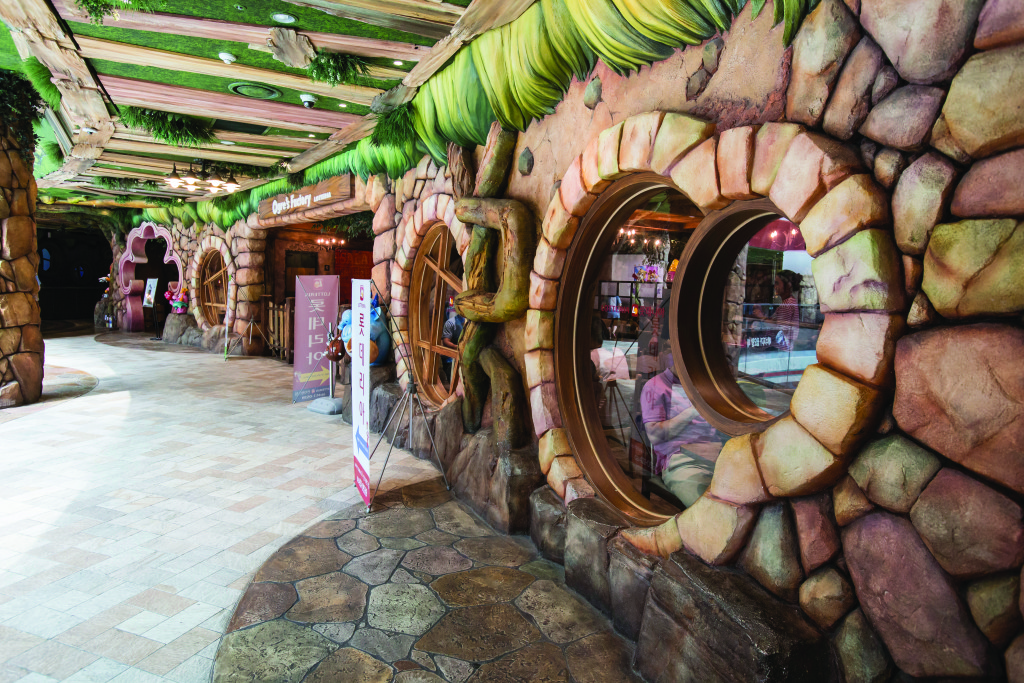 Friendly ogres inhabit the new indoor land beneath the main park and inspired by a popular Korean fairy tale. Integral to the Underland expansion is the Interactive XD Theatre from Triotech, a 40-seat, interactive dark ride for which GGE provided theming. 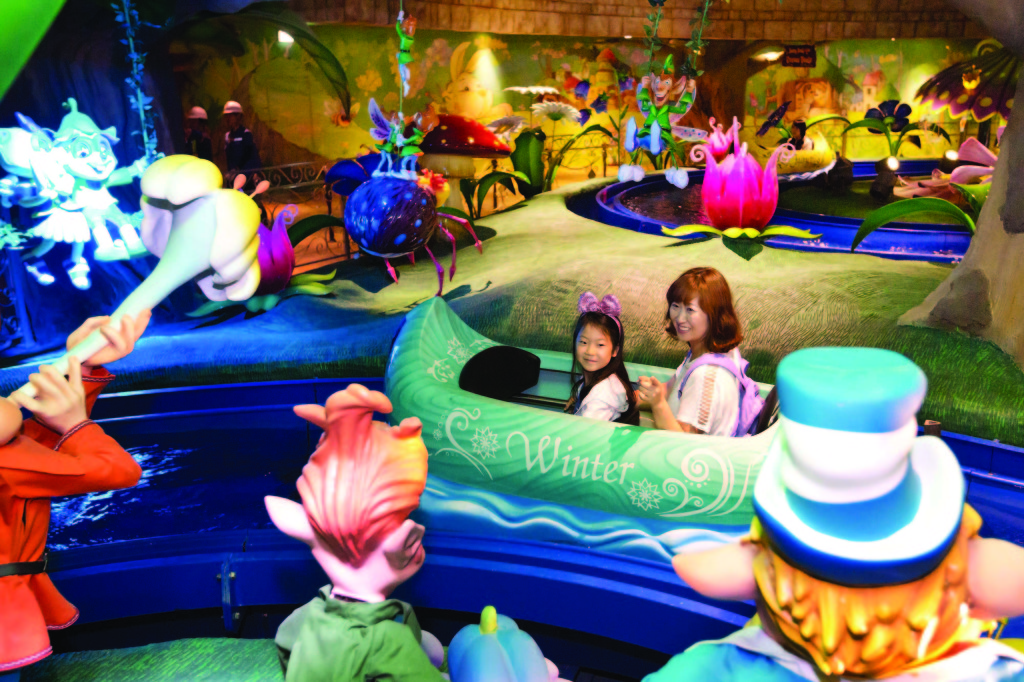 A small boat ride for parents and young children, this project was a themed make-over of an existing park ride. GGE provided a new theme for the ride and added several effects and simple animated elements as well. 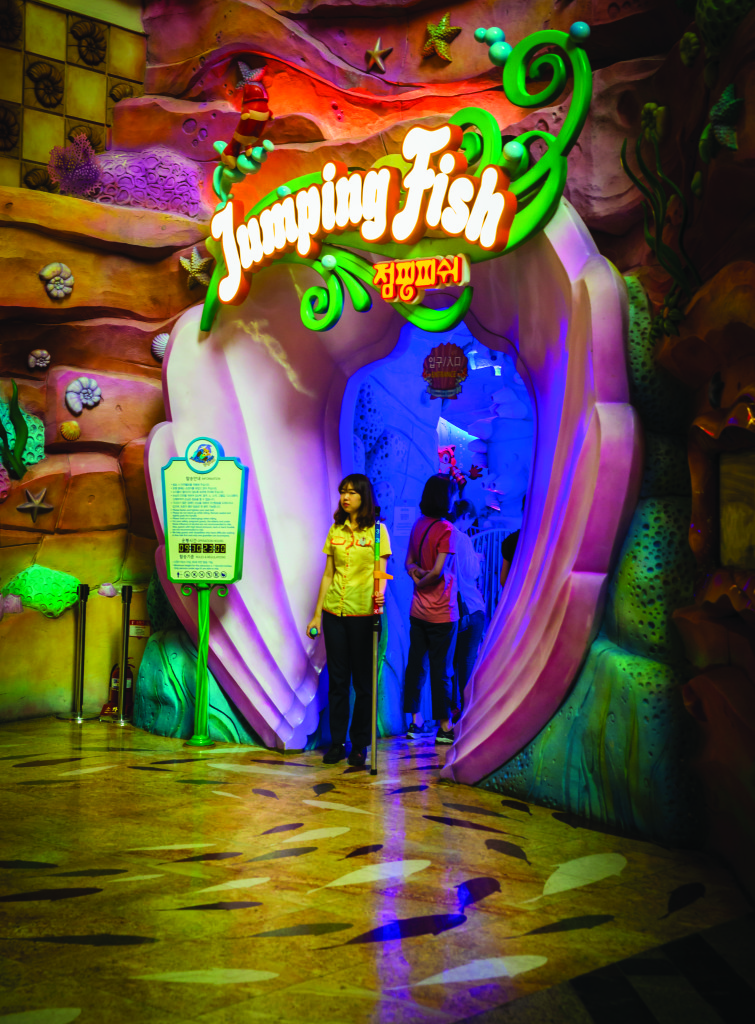 Jumping Fish is a family-oriented ride with brightly themed vehicles navigating an underwater environment. Riders encounter mostly friendly creatures but have to look out for the sharks. The ride includes audio animatronics and 4D special effects.

Do You Speak Beluga?

This interactive theater show, located in the “AquaPlaza” section of the park, immerses guests in an animated undersea setting where they have one-on-one interactions with a digitally-created Beluga Whale. Concept design by GGE; show produced by W.G. Choi, with Korea-based Rayglyph providing technology and media production. 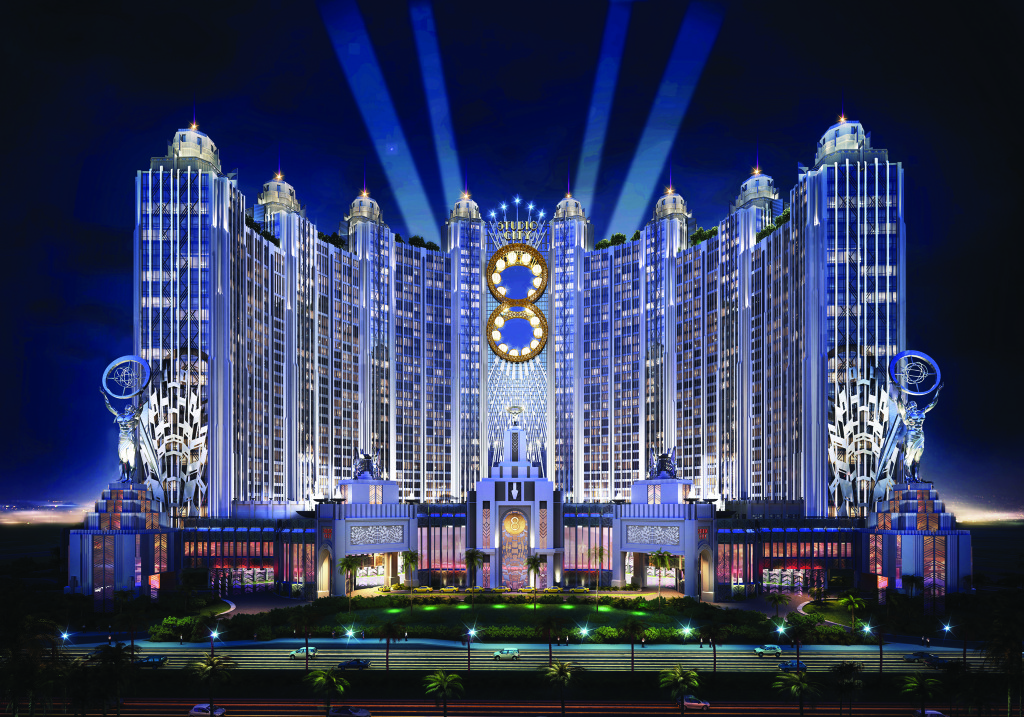 The Goddard Group has completed design, and construction has begun. Kingdom of Poseidon will feature a wide array of rides, shows, and unique experiences based upon stories of Poseidon (the sea god in Greek mythology) and other famous, ocean-related adventure tales. Goddard Group’s client is Malaysia-based KWZone Group, which has invested $1.6 billion U.S. dollars into the project, scheduled to open in 2016. 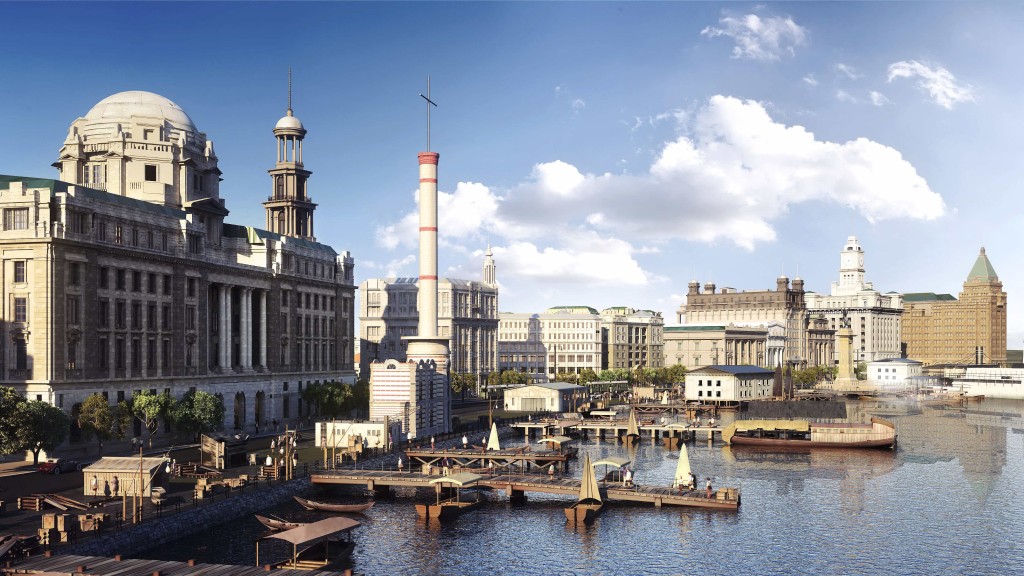 “As a film director myself, we were thrilled with this project on several levels,” said Goddard. “First, to re-create The Bund in its pre-war condition was a designer’s dream assignment. We are literally recreating a major international city in its pre-war state, making it a suitable shooting location for a host of motion picture productions. We also melded many other areas of old Shanghai into this attraction, as part of an overall Shanghai studio backlot.” In addition, the entire property is able to do double duty by provide a full “MovieWorld Studio Theme Park” experience, even as productions can be shooting simultaneously on property. “We provided the concept design, master plan, and show and ride concept design,” said Goddard of the massive project set to open in 2016.

Haichang Holdings Ltd., a leading developer and operator of theme parks and ancillary commercial properties in China, enlisted GGE for conceptual design and master planning, and complete schematic design and design development of Shanghai Haichang Polar Ocean World, positioned as a world-class marine life culture experience complex and with a projected 2017 opening. The park is located 30 minutes from the site of Shanghai Disneyland. 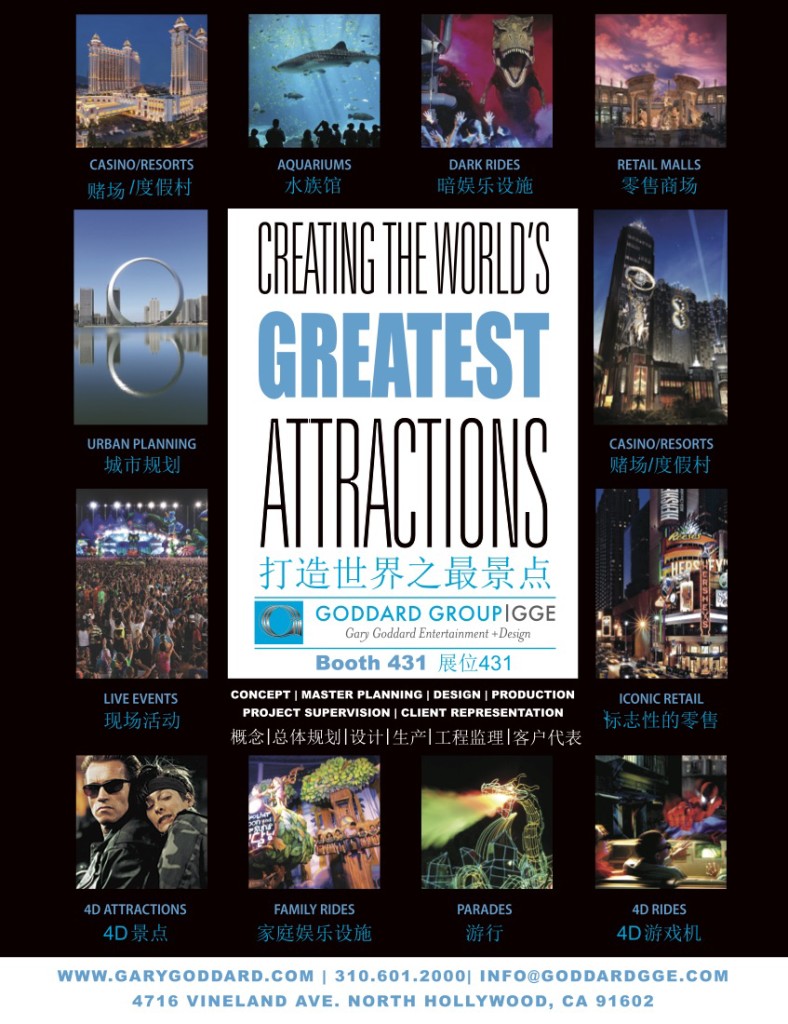 “Beyond the ordinary”
A conversation with Gary Goddard

How do you keep it fresh and unique for each client?
We try not to repeat ourselves and we look at each project we take on as a unique opportunity to create something fresh and different. I am driven by a passion to create attractions that will make an emotional connection with the guests. We never settle for the easy answer, design-wise. We push ourselves beyond the ordinary and I think our work speaks for itself in that sense: Everything we have done is iconic, memorable, and – important for our clients and partners – successful.

Do you approach projects differently in Asia than you would in North America or Europe?
You have to be sensitive to cultural differences, but the basic tools and principles of design and entertainment remain much the same. The key is to learn the market you are working in. And then, be different. Stand out.

How do you conduct your research?
I am a generalist – I tend to know a little about a lot of things – and I am naturally curious. I read a lot. I stay up to date on things. I share interesting things I find with key designers on my team and they do the same. Our research process is non-linear. We gather images and bits of information on the place, or the thing, or the idea we are working on. And we kind of bounce off them, looking for the elegant solution – or the big idea – that initial “big idea” that provides the spine for something that can, potentially, be great. And by “big idea” we mean the right idea, at the right time, in the right place, for the right market. Each project is a puzzle and “the big idea” is the solution, but it’s never easy to find.

Unlike several other companies, you haven’t established a bricks and mortar office in Asia or China. How do you assure your clients you’ve got the resources for them to rely on you throughout a project?
When I sold Landmark to Prince Alwaleed, and following my departure from that company, I decided I didn’t want another 400-person firm. I wanted to stay focused on my own creating, as a designer, writer, director, and producer – as a showman, which I think is what I really am.

I think keeping the company on the smaller side is good for the creative process. Having said that we are now pushing 30 full time staff members, around 20 full time consulting designers and illustrators, and about 120 others are working on our current projects through our long-standing relationships with trusted associate companies that supply architectural, engineering, technical design and other important support services. But we lead our projects through our core staff and project team members.

Being centralized in Hollywood works best since I continue to have direct input on everything we do. That said, we do set up site offices when our work requires it, placing staff in each country when and as needed. I have been approached by people who wanted to open partner offices in China, Indonesia, and Russia, but to date, I have respectfully declined.

How do you keep in touch, conduct meetings, and generally interface between East and West?
The best way, and the only really effective way, to communicate in Asia is in person, face to face. Cultural differences are generally not a problem as long as trust remains strong. Treat others as you would wish to be treated. That works most of the time.

If someone wants to offer services to your team, whom should they contact?
Send information through our website, www.garygoddard.com, or write to our business development executive, Eric Carnagey ([email protected]) or use snail mail to send a letter and resume.

Joe Kleimanhttp://www.themedreality.com
Raised in San Diego on theme parks, zoos, and IMAX films, Joe Kleiman would expand his childhood loves into two decades as a projectionist and theater director within the giant screen industry. In addition to his work in commercial and museum operations, Joe has volunteered his time to animal husbandry at leading facilities in California and Texas and has played a leading management role for a number of performing arts companies. Joe has been News Editor and contributing author to InPark Magazine since 2011. HIs writing has also appeared in Sound & Communications, LF Examiner, Jim Hill Media, and MiceChat. His blog, ThemedReality.com takes an unconventional look at the attractions industry. Follow on twitter @themedreality Joe lives in Sacramento, California with his fiancé, two dogs, and a ghost.
Share
Facebook
Twitter
Linkedin
Email
Print
WhatsApp
Pinterest
ReddIt
Tumblr
Previous articleFountain of Dreams
Next articleAsia Discovers Digistar