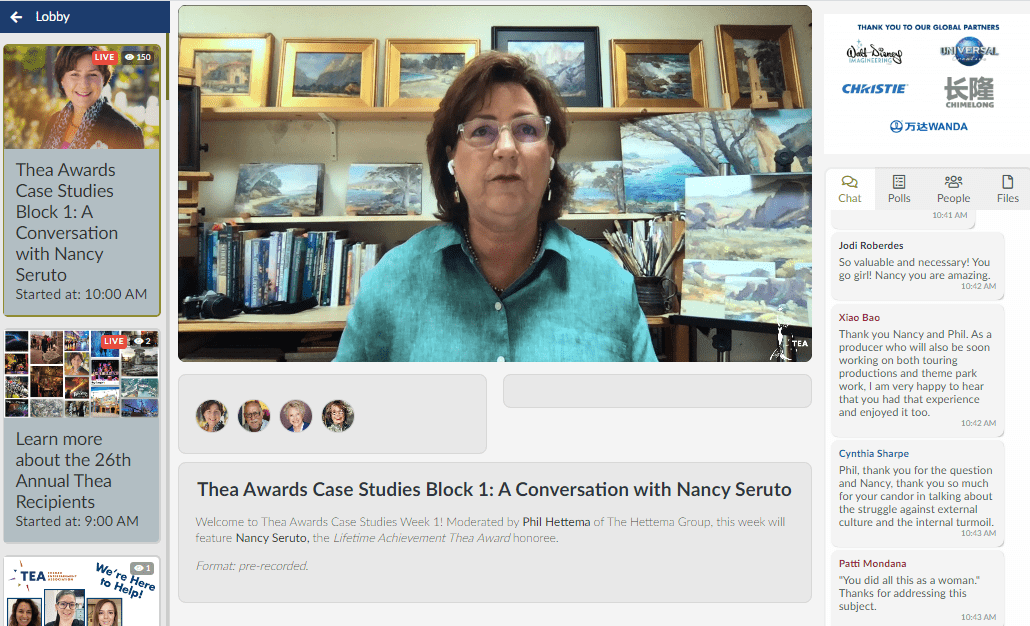 On August 6, 2020, the Themed Entertainment Association (TEA) launched its inaugural TEA Thea Awards Digital Case Studies with a discussion between Phil Hettema of The Hettema Group and Nancy Seruto of Walt Disney Imagineering. Seruto is the 2020 recipient of the Buzz Price Thea Award – Recognizing a Lifetime of Achievement. In 2018, Seruto presented the same award to Hettema.

Following the discussion, a live online networking event hosted by Adam Bezark of the Bezark Company took place, featuring many of Nancy’s colleagues and friends from throughout the years.

Nancy spoke to Phil from her paint studio, with her art lining the walls, what she calls the “happiest room on the planet.” Art would play a major role in her life. She grew up in a big family, one of five children – four of them girls. Her extended family was rather large as well. “My father’s family immigrated from Sicily,” show told Phil. “My mother was from the Midwest, and came from a very academic family. When the families met, it was like two worlds coming together.”

Growing up, Nancy followed her artistic passions, integrating them into her activities. “I knew I wanted to be some kind of artist. I played the piano, I fake tap danced in the kitchen, I painted. I was always looking for some expression of artistry.”

Nancy moved to San Diego to work on an undergraduate degree. As a girl attending college was unusual in Sicilian culture, to appease her father, she told him that she wanted to enter medicine. But while in San Diego, she discovered theater and changed her major. When he found out, her father dropped his financial support and Nancy found herself working in theater to support herself through college.

For her graduate degree, she attended California State University, Long Beach. She didn’t search a school, but rather a mentor. “I realized I had not had full training,” she shared, “so I went looking for a teacher. I walked into Herb Camburn’s office and it was me interviewing him. Many accomplished designers and technical directors in our industry studied with Herb. He was always searching for new things and teaching up until his last minutes.”

Nancy worked in lighting design for dance and at the Long Beach Convention Center while working on her graduate degree. “Then one day, I met a group of people that were painting scenery for film and television,” she said. “I discovered that it paid more than what I was earning.”

Through her work at the studios, she was introduced to the people at fabrication house Lexington, who in 1986 offered her a position. “I started as a painter and scenic artist there,” she said. “One thing I learned is that the people who deliver at the back end of a project see tremendous volume.

“There came a point for me where I started to wonder what I could be capable of without responding to the daily tasks that came from somewhere else.”

In 2000, she started her own boutique firm – Seruto & Company. While working on a range of projects, she had cherished her  museum work at Lexington. Starting with a tiny office with a lamp, the firm became focused on touring exhibitions, among them the King Tut exhibit. “When working on an exhibit,” she pointed out, “you learn a lot about yourself and about a subject that you might not normally steep yourself in.”

One of her favorite exhibits was America I AM: The African American Imprint, a 2010 TEA Thea Recipient, presented by Tavis Smiley, on which Seruto & Company collaborated with The Hettema Group. “This was about telling a story that’s someone else’s story,” she shared. “We were humbled, and had to pull back while we listened for long time before we could have an idea.”

Nancy met Bob Weis, now the President of Walt Disney Imagineering, through a traveling exhibition project she had worked on that he had produced media for. The two started working on traveling exhibition projects together. One of them involved Top of the Rock, the observation floor of New York’s Rockefeller Plaza. “I could stand up there and see Ellis Island,” Nancy said, “I felt like my Dad was with me and this project ended up being a way to honor my father.”

Another joint Seruto-Weis project involved a licensed educational exhibit based on the hit CBS show CSI. “My sister happens to be a forensic toxicologist running the Baltimore Police Department lab,” she said, “It was great for the two of us to be able to work together and in the process to learn about each other’s work.”

Weis was hired by Walt Disney Imagineering to oversee the design and development of the Shanghai Disney Resort. He casually invited Nancy to do some consulting on the project.

“We started in blue sky phases,” she shared,” I started to understand the park in general, then started conceptualizing Pirates. When the project was capitalized, I was given the opportunity to produce Treasure Cove and Pirates attraction.

“It was overwhelming at first when building relationships at Disney – I had to do it one at a time and find my way. The first relationship was just pure luck. Bob introduced me to Luc Mayrand. Luc helped me navigate my way around Disney. I brought in a few people I knew from the industry. I discovered that you build team, and the people in that team introduce you to other teams. Your team is small at first due to being in blue sky, but it explodes in size once the project’s capitalized.

“Group energy needs to be harnessed. Once it’s harnessed, amazing things begin to happen. Everyone knows something unique, something incredible that they can share.”

At Disney, she discovered that the company’s charitable work is extensive ranging from volunteer programs to a conservation fund. With Imagineering’s Carmen Smith, Nancy established a program eight years ago that connects Imagineers with nonprofit organizations to solve problems.

One of their most successful projects has been Disney Team of Heroes, which utilizes Disney IP to transform children’s hospitals into hospitable places. By listening and learning to stakeholders, the team was able to understand what could be done to bring moments of joy to place that can be so difficult.

“Every successful project,” Nancy points out, “has something that really resonates with people, but every project does it differently. You have to distance yourself from your work and look at a project as if you were a member of the audience.”

Phil asked her about the reality of dealing with schedules and budgets on a project.

“In the case of Shanghai park,” she responded, “we took on something very ambitious from the very beginning. At various stages, we questioned if we were overly ambitious. I’m not the kind of person that comes in and give pep talk. I allow team members to express their concerns and we discuss and learn from them.”

Nancy is only the second woman to receive the TEA’s Buzz Price Award. She started out in a very male dominated industry. “There were always big groups of guys – you know, guy’s guys,” she shared. “As a woman, I had to start developing skill set for working in that environment that were proactive. No matter who you’re working with, you have to be able to put the room at ease in order to build a team. I like to do that through humor.

“My mother was an independent woman. She was college educated and flew airplanes. Mother maintained this delicate balance of influencing her four daughters without upsetting my Sicilian father. She told me: ‘Father’s vision of you is not you. He doesn’t define you. You are who you make yourself to be.’

“We have a lot of work to do to make ourselves an open system. We need to be proactive. And remember – mid-career professionals have the power to change the industry.”

TEA Thea Awards Digital Case Studies resumes on August 20 with a showcase on museums. Tickets include on-demand access to previous sessions, including Phil Hettema’s discussion with Nancy Seruto. They can be purchased at https://www.eventbrite.com/e/26th-thea-awards-digital-case-studies-tickets-111695574470

Joe Kleimanhttp://wwww.themedreality.com
Raised in San Diego on theme parks, zoos, and IMAX films, InPark's Senior Correspondent Joe Kleiman would expand his childhood loves into two decades as a projectionist and theater director within the giant screen industry. In addition to his work in commercial and museum operations, Joe has volunteered his time to animal husbandry at leading facilities in California and Texas and has played a leading management role for a number of performing arts companies. Joe previously served as News Editor and has remained a contributing author to InPark Magazine since 2011. HIs writing has also appeared in Sound & Communications, LF Examiner, Jim Hill Media, The Planetarian, Behind the Thrills, and MiceChat His blog, ThemedReality.com takes an unconventional look at the attractions industry. Follow on twitter @ThemesRenewed Joe lives in Sacramento, California with his wife, dog, and a ghost.
Share
Facebook
Twitter
Linkedin
Email
Print
WhatsApp
Pinterest
ReddIt
Tumblr
Previous articleHolovis relocates to purpose designed 52,000 square foot headquarters
Next articleNew exhibition featuring rare Hypercars opens at Ferrari World Abu Dhabi