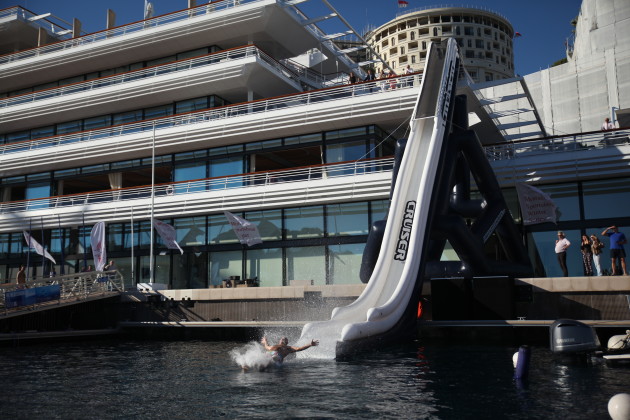 ABOVE: The Hybrid Slide thrills guests at a yacht club. Photo courtesy of Freestyle Slides

[dropcap color=”#888″ type=”square”]U[/dropcap]pon hearing ‘inflatable slides,’ people’s minds typically wander to the bounce house rentals that have been popular at community events and birthday parties. Although they come in many different shapes, sizes and themes they are all essentially built upon the same kid-friendly concept.

FreeStyle Slides has been expanding that concept of an inflatable slide that appeals to adults as well. “We wanted to create inflatables that deliver the same thrills as permanent, state of the art, amusement park rides,” says Stephen Philp, owner and founder of FreeStyle Slides.

The concept has caught on and in the first week of December, a ‘pop-up’ water park is set to open in Perth, Australia. “Xscape at the City is only temporary, but we want the adrenaline and thrills to last a lifetime,” explains Nasir David, president of Perth-based Amusement Leisure Consultants, which conceived the project. Amusement Leisure Consultants turned to FreeStyle Slides to help with the park, as they had already created the world’s tallest drop slide, called the FreeStyle Hybrid Slide.

The Hybrid Slide was developed two years ago. The slide is versatile – it can be attached to an existing building, or freestanding structure, and can be moved from location to location. It is designed to run into existing bodies of water, man made reservoirs, or FreeStyle’s inflatable extension run out and landing bed.

The Hybrid Slide made its first public appearance at the Yacht Club de Monaco and has been a popular addition to Yacht Club events, from sailing races to the reception of the Royal Wedding that took place a few months ago.

Both David and Philp felt the park needed a unique ride – and so, using the Hybrid design, a team of engineers from FreeStyle created an even taller version of the original Hybrid – a slide that rises to 76 feet (22 meters). This temporary structure will stand taller than all of the other attractions at the park. David and Philp hope this will earn the Hybrid Slide a Guinness World Record for ‘World’s Tallest Inflatable Water Slide.’ (There is currently no official record holder for the title.)

The park will also feature Trippo XL – a super sized version of FreeStyle’s Trippo Slide, which can be found at beach resorts such as TradeWinds in St. Petersburg, FL, and Lake Rudolph Campground & RV Resort in Santa Claus, IN. • • •

For more information on the water park in Australia, or any of FreeStyle Slides products, visit their booth at IAAPA (#1332), visit www.freestyleslides.com, or email [email protected] 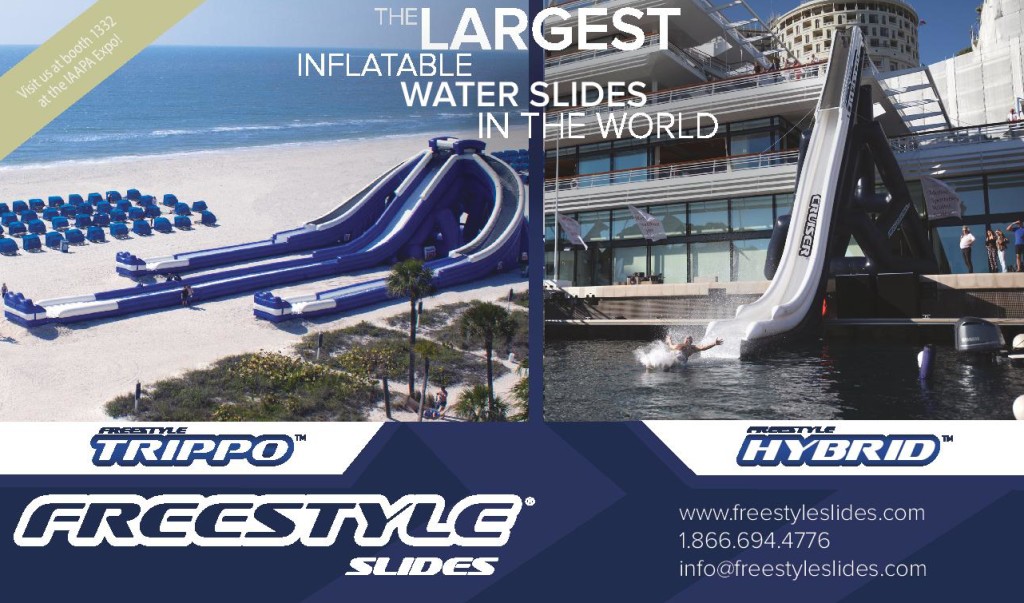 Joe Kleimanhttp://wwww.themedreality.com
Raised in San Diego on theme parks, zoos, and IMAX films, InPark's Senior Correspondent Joe Kleiman would expand his childhood loves into two decades as a projectionist and theater director within the giant screen industry. In addition to his work in commercial and museum operations, Joe has volunteered his time to animal husbandry at leading facilities in California and Texas and has played a leading management role for a number of performing arts companies. Joe previously served as News Editor and has remained a contributing author to InPark Magazine since 2011. HIs writing has also appeared in Sound & Communications, LF Examiner, Jim Hill Media, The Planetarian, Behind the Thrills, and MiceChat His blog, ThemedReality.com takes an unconventional look at the attractions industry. Follow on twitter @ThemesRenewed Joe lives in Sacramento, California with his wife, dog, and a ghost.
Share
Facebook
Twitter
Linkedin
Email
Print
WhatsApp
Pinterest
ReddIt
Tumblr
Previous articleThree is a Magic Number
Next articleThe Hunger Games