Texas Prepares For 2012 with New Attractions, Exhibits, and Parks 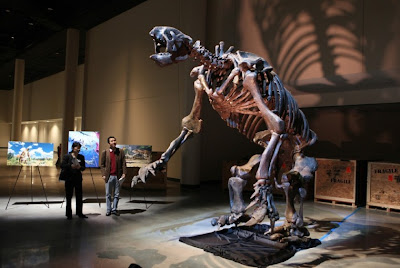 Austin, TX, USA (March 20, 2012) /PRNewswire/ — The Lone Star State has always been an exciting destination for family fun, and this year is no exception, with spring and summer marking the debut of numerous attractions, parks, outdoor experiences and more. Visitors of all ages will find unique experiences and locales perfectly suited to their interests.

“Texas is the perfect destination for travelers in search of a spring or summer destination packed with entertaining attractions for the entire family,” said Julie Chase, director of tourism for the Governor’s Office of Economic Development and Tourism. “New attractions in Texas will give families even more unforgettable experiences, from sunny beaches and outdoor adventure to world-class museums and thrilling theme parks.”

Texas is also home to a number of naturally-made waterways, and with the addition of seven new paddling trails, North Texas is now home to the state’s largest concentration of paddling trails in the state. Families can enjoy a relaxing journey down a shaded creek or across a wildlife-rich wetlands pond, a wide-open paddle across a placid lake, or an exciting run of Trinity River “whitewater” within view of the Dallas skyline.

The Lone Star State has theme parks aplenty, guaranteed to suit every thrill-seeking family. In Arlington, experience Six Flags Over Texas and Six Flags Hurricane Harbor, and take a spin on the award-winning and breathtaking Texas Giant roller coaster – a record-breaking steel-wood hybrid which debuted its $10 million refurbishment in 2011. A few hours south, in San Antonio, Six Flags Fiesta Texas will debut the brand new SkyScreamer in spring 2012, which will spin guests 200 feet in the air.

In Galveston Island, the past is becoming present with the opening of the Historic Pleasure Pier on Memorial Day weekend. Based on the original Pleasure Pier that was built on the island in the 1940s, this amusement park will offer 16 rides, a full-service restaurant, midway games, shopping and live entertainment, all overlooking the beautiful Gulf of Mexico.

In the summer of 2012, the Houston Museum of Natural Science will debut Paleontology Hall. Measuring two stories tall and the length of a football field, this new hall will house 60 new mounted skeletons featuring more than 30 dinosaurs and large mammals. The unquestioned centerpiece will be the all-bone T. rex, complete with patches of original skin. Joining the T. rex will be a virtual ancient aquarium, a nest of Quetzalcoatlus-ancient Pterosaurs with 30-foot wingspans, a 13-foot reconstructed jaw of a Megalodon, the largest shark ever to swim the ocean, and many more fun exhibits.

On Galveston Island, young pirate fans can walk the plank at the Pirates! Legends of the Gulf Coast museum, which opened in January. This interactive museum tells the story of the island’s pirate history, specifically the settlement of the infamous pirate Jean Lafitte in 1817, and it features the deck of a pirate ship, captain’s cabins and other special exhibits.

For more information about family-friendly travel in the Lone Star State, visit http://www.TravelTex.com or find us on Facebook and Twitter.

About Tourism in Texas

Tourism is one of the largest industries in Texas, supporting 529,000 jobs across the state. In 2010, travelers spent an estimated $57.5 billion in Texas. Travel expenditures generated $2.9 billion in state taxes and $1 billion in local taxes. For more information on Texas travel events and vacation destinations, or for a free Texas Travel Guide, visit TravelTex.com.

Joe Kleimanhttp://wwww.themedreality.com
Raised in San Diego on theme parks, zoos, and IMAX films, InPark's Senior Correspondent Joe Kleiman would expand his childhood loves into two decades as a projectionist and theater director within the giant screen industry. In addition to his work in commercial and museum operations, Joe has volunteered his time to animal husbandry at leading facilities in California and Texas and has played a leading management role for a number of performing arts companies. Joe previously served as News Editor and has remained a contributing author to InPark Magazine since 2011. HIs writing has also appeared in Sound & Communications, LF Examiner, Jim Hill Media, The Planetarian, Behind the Thrills, and MiceChat His blog, ThemedReality.com takes an unconventional look at the attractions industry. Follow on twitter @ThemesRenewed Joe lives in Sacramento, California with his wife, dog, and a ghost.
Share
Facebook
Twitter
Linkedin
Email
Print
WhatsApp
Pinterest
ReddIt
Tumblr
Previous article
Wynn Resorts And Show Media Place Interactive City Guide in 1000 Vegas Taxis
Next article
Specialty Group Creates Beanbag Cinema For Children’s Hospital