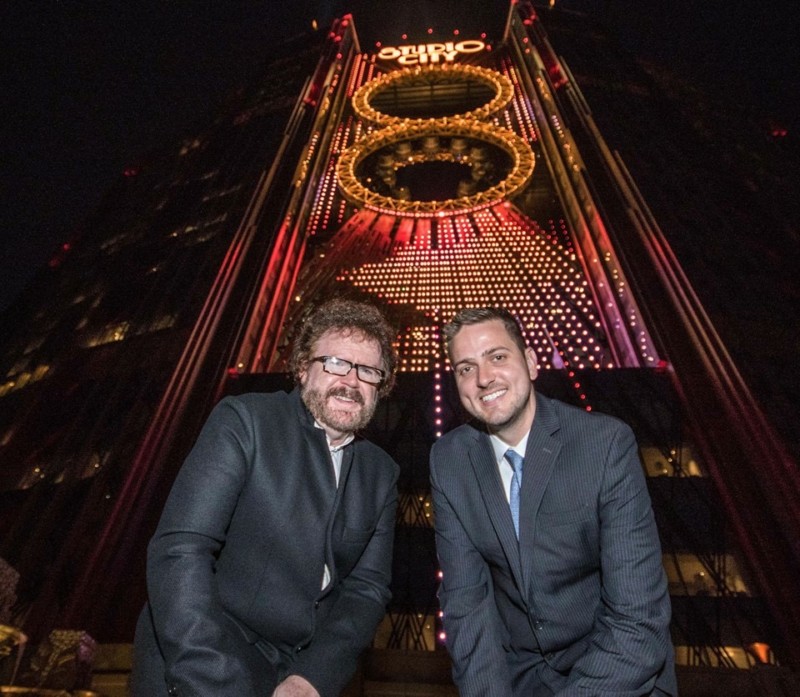 ABOVE: Gary Goddard and Taylor Jeffs in front of the Studio City resort in Macau. All photos courtesy of The Goddard Group.

Through a variety of companies and countless projects, Gary Goddard has left an indelible and innovative mark on the industry. [For more on Gary’s role in the industry, see the supporting article below.] InPark’s Martin Palicki (MP) spoke with Goddard (GG) and Taylor Jeffs (TJ), Director of Design at Goddard Group, on recent and upcoming projects along with their take on paths for industry growth.

MP: From where did your interest in the industry originate? What motivates you?

TJ: I won the lottery to have been born and raised in Orange County, California, nearby Disneyland and Knott’s Berry Farm. Having essentially grown up in these parks, the medium was ingrained in my DNA before I could even speak, and from the time I was three the ultimate goal was clear- I wanted to design theme parks.

GG: In terms of attractions, I continue to look to be inspired by others’ work.  I am known to be very critical, but there is nothing I like more than a new ride or show that delivers. The Pirates ride at Shanghai Disneyland is spectacular. I went on the ride, then rode it again right away, and then scheduled another visit to the park to ride it a third time. It’s an excellently designed attraction. The big beats of that whole park are great and well thought out.

Back in the States, after visiting Diagon Alley at Universal Studios I sent a letter to Mark Woodbury (Vice Chairman of Universal Parks & Resorts) congratulating them on designing a land that really created a total experience and made me say “Wow, that was fantastic.” These types of experiences are what drive me and I think it’s what drives the best folks in the industry.

MP: One of the major projects you’re working on now is the Cirque du Soleil park under construction in Neuvo Vallarta, Mexico. Can you give us an update?

TJ: Construction is racing along in Mexico while we continue to develop and innovate both here at our headquarters in Los Angeles, and at Cirque’s home base in Quebec. We conducted a mock-up of one attraction this past fall near Quebec City, inviting both industry colleagues and members of the public to attend, and the result was truly electric- I felt I was looking into the future.

GG: I call it an experience park instead of a theme park because it is filled with immersive experiences. It has theme park elements, rides and shows, etc. But the way we have configured things and the way it will be consumed is very different. The waterpark is conceived as a rainforest. There will be no red, blue and yellow slides. It will appear that things are built by tribes in a way only Cirque can do. There is an entire nighttime waterpark experience but it will revolutionize the evening experience for waterparks. We are working with Cirque to create something truly original and revolutionary.

TJ: I really believe our Cirque du Soleil waterpark will dramatically shake things up when the first phase debuts (scheduled for 2019). We’ve creating an entirely new creative approach that could fundamentally change waterparks, and I really can’t wait to share that with the world.

All the World’s a Stage

MP: How do you keep a fresh approach when developing projects?

GG: Whenever we are traveling we make sure to take time to find out what other interesting projects and locations are nearby so we can experience them and learn from them. And it isn’t only theme parks but also cultural events, local happenings, unique dining experiences, and festivals. You have to always keep recharging the batteries. You have to stay curious and look to learn from the world around you.

TJ: Exactly. The best theme park designers are those who are curious and passionate about as many topics and mediums as possible, which then informs their work in theme parks.

We actually just announced a new venture that is based on this philosophy.  We’re partnering with Neil Patrick Harris to bring a new kind of magic show called “In & Of Itself” to New York this spring. I had caught a performance of the show during its initial run in Los Angeles this past summer, and was so knocked-out that not only did we take many of our staff members and clients to see it, but we also approached the show’s creators about a New York transfer, which is now becoming a reality. This is the kind of project that I like to think Goddard Group embodies.

GG: If every park was about theming, then every theme park would be successful. If it was just about the rides, then you could buy the rides and have a successful park. But it’s something more than those individual components and ideas. It’s creating an experience that understands what each unique market needs and then providing something that will be fun, inspire guests, and to do it in a manner that allows them to escape the real world. It’s what I call “The Big Idea” – the right concept, at the time, in the right place, for the right audience.

MP: What is your take on the future of the industry?

GG: I am very optimistic for the industry, subject to the geopolitical landscape not going crazy. I fundamentally believe that the economies of China and America are too tied together for the government to allow any one leader to screw it up too badly. I am assuming that the rhetoric of division will go away as cooler heads prevail.

Look, I think China is just getting to the point now where they want to get IPs and originate. There is a chance now that China is a place where we can originate things and the Western designers will say “wow you have to go over there to see this ride or project – it’s pretty cool.” Creating original work is where the emerging markets, including China and Dubai, need to focus.

TJ: From the standpoint of “what’s next,” we are moving towards total immersion—fully-realized story worlds where all five senses are “in character.” That said, it will still take a while to achieve that, requiring further investment and buy-in from developers. The team here is always looking for what our industry can offer audiences that no other can, and our ability to place people in the middle of physical stories is something that no other medium can come close to replicating. • • •

Joe Kleimanhttp://wwww.themedreality.com
Raised in San Diego on theme parks, zoos, and IMAX films, InPark's Senior Correspondent Joe Kleiman would expand his childhood loves into two decades as a projectionist and theater director within the giant screen industry. In addition to his work in commercial and museum operations, Joe has volunteered his time to animal husbandry at leading facilities in California and Texas and has played a leading management role for a number of performing arts companies. Joe previously served as News Editor and has remained a contributing author to InPark Magazine since 2011. HIs writing has also appeared in Sound & Communications, LF Examiner, Jim Hill Media, The Planetarian, Behind the Thrills, and MiceChat His blog, ThemedReality.com takes an unconventional look at the attractions industry. Follow on twitter @ThemesRenewed Joe lives in Sacramento, California with his wife, dog, and a ghost.
Share
Facebook
Twitter
Linkedin
Email
Print
WhatsApp
Pinterest
ReddIt
Tumblr
Previous articleThe Barker Bird
Next articleUSITT: Of Racks and Rigs

InPark Tracks: Coming soon to a podcast near you