USITT: Of Racks and Rigs 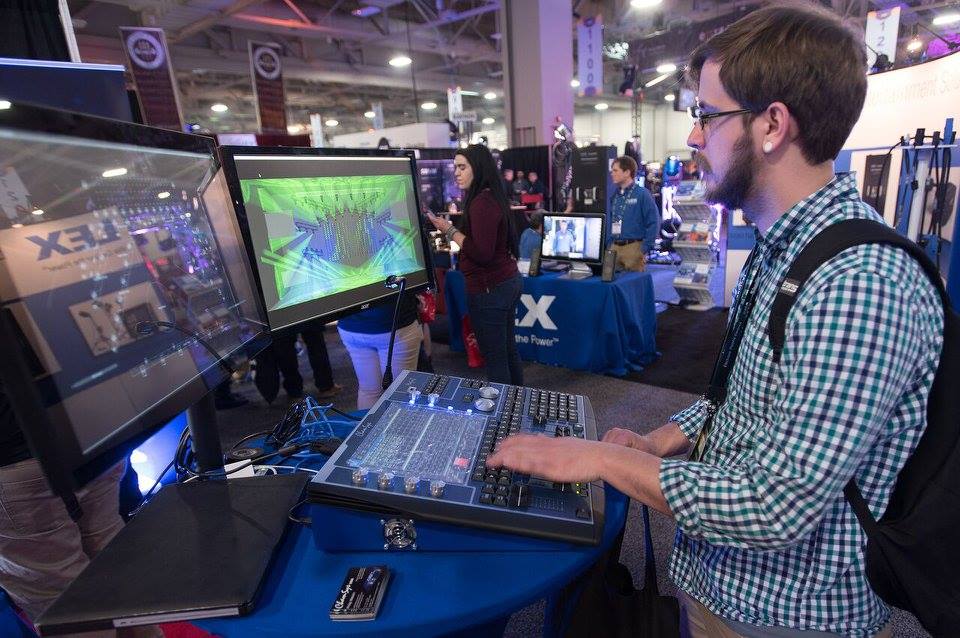 ABOVE: On the show floor at the 2016 USITT Expo. Courtesy USITT.

In 1960, the United States Institute of Theater Technology was founded to promote dialog and research in the field. USITT has grown into a leading association for performing arts and theater professionals, but its programming also reflects how much sharing there is between theater and themed entertainment design. Disney, Universal, SeaWorld, Cirque du Soleil, and Feld Entertainment all participate in one way or another at USITT: as attendees, as speakers, as exhibitors. SeaWorld, covered in this issue, regularly has a recruitment booth there.

David Grindle spent more than 20 years as a stage manager, where he discovered that an opera has quite a bit in common with the circus. He shared an amusing anecdote. While at Opera Grand Rapids, he oversaw a production of Aida performed in a sports arena which featured 24 horses and 18 elephants. “The horses didn’t want to follow their cues, they just wanted to play with the elephants,” he says. “I learned quite a bit on the production.”

Grindle describes technology as “a contemporary artist’s brush” and talked to us about some prevalent technologies familiar to themed entertainment professionals and how they are employed in theater.

Projection mapping is having such a huge influence on the entertainment industry that an entire day-long workshop is planned around the technology at USITT 2017, culminating in a visit to St. Louis Union Station and the immersive display in its Great Hall.

“Projection mapping becomes an amazing tool to create environments,” says Grindle. “It gives the ability to paint multiple things. We can start turning things into other things and performers can interact with the technology. As it continues to grow as an entertainment possibility, people will adapt and it will take more of the front space when creating performances.”

Virtual reality, which we see popping up on roller coasters, simulators and in museum exhibits, is also poised to change live performance venues. Grindle explains a scenario in which – with audiences in two different theaters wearing VR headsets – performers in each theater can interact with one another, giving the illusion that they’re physically onstage together.  “Dance has embraced this,” he adds, “since it’s a complete visual experience. We’re not fully there, but the concept is being worked on. The thing holding this back is that the data does not yet transfer at speeds that are quick enough.”

Grindle also called attention to the current well developed state of wire work. “Take a look at Mary Martin being pushed into the air as Peter Pan 60 years ago,” he said, “and compare that to Spider-Man on Broadway or Gaga at the Super Bowl. That was in a football stadium. The harness and flying design have progressed by leaps and bounds.”

As new technologies enter the entertainment field, new engineering fields are being embraced – entertainment engineering, materials processing and software coding among them.  According to Grindle, scenery and lighting are now being asked to provide more movement and motion than ever before.

While technology advances the industry, the standards remain. “Sound design sets the mood. It begins in the darkened environment,” Grindle said, “then the lights come on and they show the audience where to look.” The same sound and lighting principles used on stage are also utilized in attraction and museum exhibit design.

USITT also has a commitment to mentorship, with eight different mentorship programs. “It’s fascinating for young people to listen to industry professionals willing to take risk and vice versa,” says Grindle. “One of our mentors is Gordon Pearlman, who invented the first computerized lighting board. I’ve watched him learn from the students that he’s mentoring just as much as he’s taught them. It’s a two way street – the Socratic method, and it opens doors for everyone involved.”

In 2016, USITT launched its Gateway Program, with the initiative to bring diversity into the entertainment design and technology field. The organization defines “diversity” rather broadly and asks applicants what makes them diverse and underrepresented.

Answers are not always limited to race, gender, or religion. Once in the program, participants are paired with an industry mentor with a similar background and career path. When a wheelchair-bound sound engineer with cerebral palsy was admitted to the program, he was paired with Michael Maag, Resident Lighting Director of the Oregon Shakespeare Festival, who also uses a wheelchair.

USITT’s diversity initiative also partners with a high school program in an economically hard part of the conference host city and brings those students to the conference.  “We show kids that there are jobs for them, not just in traditional theaters,” says Grindle. A large portion of the membership commitment to USITT’s diversity programs comes from the themed entertainment field. Serving as Vice Chair for Diversity is Nicole Queenan of Walt Disney Parks & Resorts.

In all its initiatives, USITT encourages risk. “With new technologies and new ideas,” says Grindle, “the number one thing we’re fostering is the importance of taking a chance.  We’re becoming risk adverse as a business society. We’re a broad group with members in lighting, costume, scenery, sound, management, architecture, technical production, design and technology. We don’t represent just one segment. For us, the joy of collaboration is bringing all of these disciplines together and seeing what we can learn from each other.” • • •

Joe Kleimanhttp://wwww.themedreality.com
Raised in San Diego on theme parks, zoos, and IMAX films, Joe Kleiman would expand his childhood loves into two decades as a projectionist and theater director within the giant screen industry. In addition to his work in commercial and museum operations, Joe has volunteered his time to animal husbandry at leading facilities in California and Texas and has played a leading management role for a number of performing arts companies. Joe has been News Editor and contributing author to InPark Magazine since 2011. HIs writing has also appeared in Sound & Communications, LF Examiner, Jim Hill Media, and MiceChat. His blog, ThemedReality.com takes an unconventional look at the attractions industry. Follow on twitter @ThemesRenewed Joe lives in Sacramento, California with his fiancé, two dogs, and a ghost.
Share
Facebook
Twitter
Linkedin
Email
Print
WhatsApp
Pinterest
ReddIt
Tumblr
Previous articleTHE GODDARD GROUP: Fireside Chat
Next articleKEN SABA: The Whats, Whys and Hows