The mysteries of Mystic Timbers 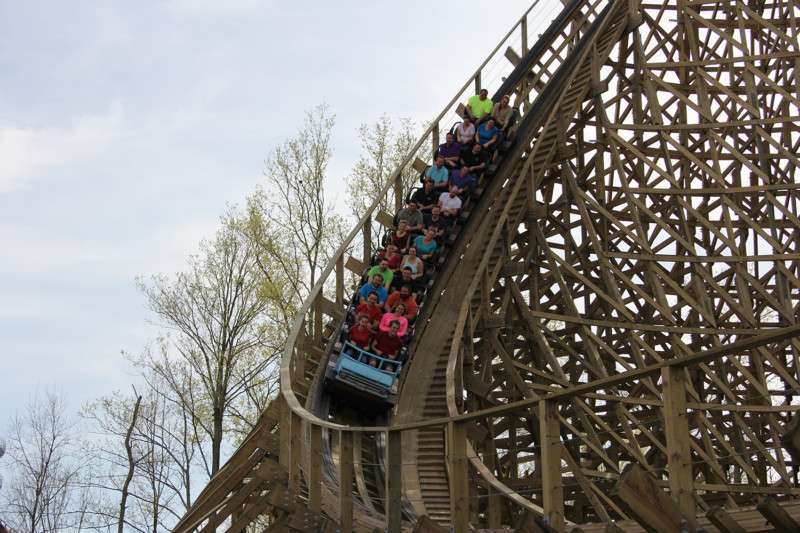 Designing a new roller coaster today is an exercise in storytelling as well as engineering. Themed stations and ride vehicles, queue elements, and adjoining retail all combine to get the point across. Not only are the coasters and their environments skillfully themed, they include carefully crafted backstories to further push the excitement. Such is the case for Mystic Timbers, a new wooden roller coaster at Kings Island, a Cedar Fair park.

“With Mystic Timbers, we wanted to give our guests more than just a roller coaster – to make it more of an immersive, story-driven attraction,” said Don Helbig, Area Manager-Digital Marketing at Kings Island. “It gives our guests more to talk about, and it’s quickly become one of the most popular rides in the park.”

Whether of the wood or steel variety, highly detailed, story-driven roller coasters at the regional park level are relatively rare – although we think this may not be the case for very much longer.

Kings Island commissioned Holovis early on to show produce the entire attraction experience. They would work closely with corporate and Kings Island teams to develop the backstory and theming. Holovis enlisted Daniels Wood Land to provide props and scenery throughout. The roller coaster firm of Great Coasters International, Inc. (GCII) was selected as the ride manufacturer.

Well before Kings Island issued the full, official Mystic Timbers press release in 2016, clues were being released in a teaser campaign to indicate a new major ride was on the way. The press release was followed by a big reveal to an enthusiastic crowd, as part of a live nighttime event inside the park. Nearly all details of Mystic Timbers were made known that night – except one. The ride’s ending remained a mystery, keeping the public in suspense until opening day (April 15, 2017). Meanwhile, #WhatsInTheShed, another teaser campaign, kept attention on Kings Island during the off season.

GCII is best known for “twister” style wooden roller coasters: those with numerous track crossovers and very few straight sections of track. But while Mystic Timbers does contain a few twister elements, this creation would definitely be classified as an out-and-back style ride. All of GCII’s coasters are supplied with the company’s own Millennium Flyer trains; three are utilized here.

The wooden roller coaster is certainly alive and well, as proven by the multiple projects opening in 2017 from GCII alone. Older wooden coasters have something of a reputation for roughness, but modern construction techniques, materials and components have smoothed things out. “At Great Coasters, we continue to strive to make the smoothest, most exciting, and maintenance friendly wooden coasters in the world,” said Adam House, Senior Design Engineer at GCII. “One of the biggest enhancements is the use of Ipe wood [a very hard, dense Brazilian hardwood] on the track.”

Mystic Timbers starts in the Rivertown section of the park, in the fictional setting of the Miami River Lumber Co. The layout stretches into a wooded area away from park midways, and at times crisscrosses the park’s river rapids ride. At the turnaround point, track enters a tunnel, and from there begins the return trip, racing toward the aforementioned shed. The GCII Millennium Flyer trains were made to resemble the old blue truck of the storyline that is found in the queue area. “At this point, there aren’t any real limitations for theming the Millennium Flyers,” said House. “Obviously we need to be cognizant of the clearance envelope and passenger reach, but regarding the theme itself, the sky really is the limit!”

The story begins in the queue, building anticipation for the shed finale. A crashed pickup truck at the gate, and vine-covered signage are the first noticeable suggestions the lumber company has mysterious forces at work. “Every detail alludes to why it’s been abandoned for so long, with elements that seem ‘stuck in time’ from that fateful day in 1983 when the mill closed,” says Amy Steele, VP of Development at Holovis. “For example, from within the truck, you can hear radio shows playing. If you listen carefully, you’ll hear a talk show speculating on the mill closing, interrupted by music and Kings Island advertisements from 1983.”

More queue backstory: an empty guard shack houses monitors that display video of security personnel in the area attempting to locate trespassers. Audio warns visitors to stay away; as guests move closer to riding, the warnings become more frantic. And then, the ride itself begins to deliver on the promise. “Even the lift hill has a motion profile programmed to add to the show, then you get sent twisting, turning, and racing through a mysterious timber forest until you inevitably come to the shed and discover for yourself the secrets hidden inside,” says Steele. “The guest gets a total experience from start to finish.” 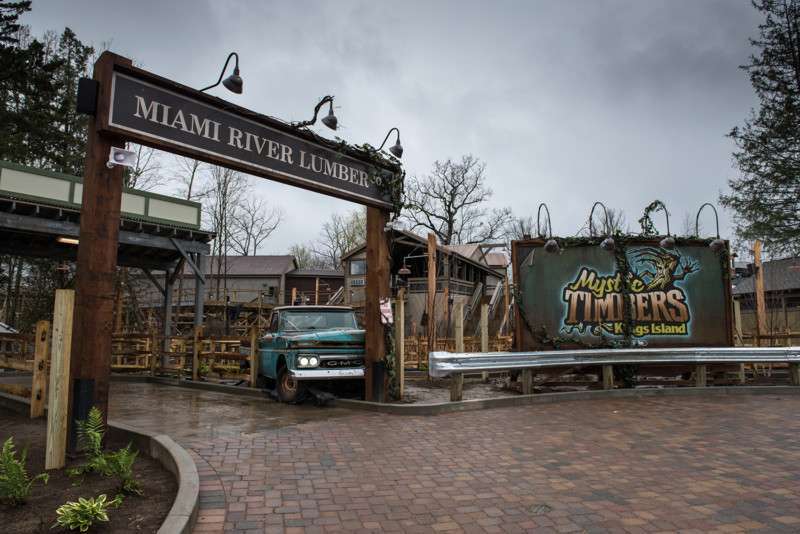 At the end of the ride, passengers finally encounter the mystery in the shed. Trains hop up to a flat track section where magnetic braking brings the action to a halt. A brief pause occurs before proceeding towards the shed. All the while audible warnings persist about proceeding. The train full of passengers slowly moves into what resembles an old lumber mill, overrun with vines. More of Daniels Wood Land’s handiwork is showcased in the shed. The company is known for using reclaimed materials to give character, and there’s no shortage here as pointed out by Andy Dauterman, Custom & Theming Projects Manager. “Using reclaimed materials is a crucial part of our theming business. They add to the realism; they have history and age. For the interior of Mystic Timbers, we used machinery and conveyers from a dismantled walnut processing facility. This same type of equipment was common in lumber mills, so we repurposed them to fit within the shed scenes. Wrapped with vines, they really add to the authenticity of the interior.” Where needed, fresh materials were modified to look old. “We age and distress the wood using a variety of paints, stains and washes, including rusting all the hardware. Then we layer in all the props and details,” said Dauterman.

Dauterman talked about some of the intricate details, including many animated props, that his company provided and that complement the projections to create the coaster environment. “Lockers swing out towards the riders and the doors open, a sign drops, saw blades clang, chains rattle, overhead lights sway, and an air duct drops from the ceiling. All of these are pneumatically driven and triggered as part of the show sequence. Other gags include spooky red eyes, a playing tape recorder, and the lights on the vending machine going haywire.”

In addition to practical effects, Holovis created multiplescreen, projected endings that further beg for multiple re-rides. “Just when you think you’ve discovered the secret to Mystic Timbers, the experience and the story change,” said Steele. “You have to ride the attraction quite a few times and during different times of the day to find out all the secrets that lie in the shed. The elaborateness was also important because the story isn’t just in the final moments of the ride. Everyone, including GCII had to buy into the story, and an elaborate, fully-realized backstory is key to keeping everyone on point.”

Other than the kids’ area, Kings Island does not rely on licensed IP to theme its rides. The original story aspect is key to Kings Island and to Mystic Timbers. But story or no story, everyone on the team kept in mind that this was a roller coaster. “The attraction can simply be enjoyed as just a really great coaster,” said Steele. “But if you are a Kings Island fan, there are so many layers to discover. The longer people spend in the queue and the more times they ride, the more they will savor the mysteries of Mystic Timbers.”

“Holovis has been working with Cedar Fair since 2015, with their Techtainment group responsible for adopting new and emerging technologies into attractions within Cedar Fair,” said Steele. The first collaboration was an augmented reality (AR) gaming experience, “The Battle for Cedar Point,” launched in 2016. It allows guests to use a mobile app to compete against others while exploring the park. “The AR overlay converts queue lines into battlefields, where guests engage in interactive games and networked battles against every other player in the park,” said Steele. The technology earned Holovis a Brass Ring Award from IAAPA in the category of technology applied to amusements and saw the concept expand to Kings Dominion in 2017.

Steele noted that Holovis is working on additional ways to apply new technologies and overlays to reinvigorate parks. “One of our key focus areas is using technology to personalize the theme park space. A lot of what our R&D teams are working on is about collecting data from the guest and using it to change the attraction in a deeply personal way. We anticipate a lot of interesting refurbishment and retrofit opportunities that will leverage technology and software to add story and personalization.”

Mystic Timbers may very well be a good indication of things to come according to GCII and Holovis. “Working with Cedar Fair and Holovis through this project made it all the more exciting,” said House. “The team did a fantastic job merging the ride with the show elements for the shed and we at GCII are excited and hopeful to work with a show producer again in the near future.”

Steele adds, “This combination created something special and shows how storytelling could be as integral a part of the experience as the coaster itself, setting a trend for ‘storytelling coasters’ that you’ll see in 2017 and 2018.” • 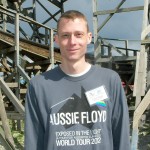 Kevin Dazey has a mechanical engineering background and works in R&D at a manufacturing company in St. Louis. He writes about ride engineering, roller coasters and related topics for InPark. [email protected]

Joe Kleimanhttp://wwww.themedreality.com
Raised in San Diego on theme parks, zoos, and IMAX films, InPark's Senior Correspondent Joe Kleiman would expand his childhood loves into two decades as a projectionist and theater director within the giant screen industry. In addition to his work in commercial and museum operations, Joe has volunteered his time to animal husbandry at leading facilities in California and Texas and has played a leading management role for a number of performing arts companies. Joe previously served as News Editor and has remained a contributing author to InPark Magazine since 2011. HIs writing has also appeared in Sound & Communications, LF Examiner, Jim Hill Media, The Planetarian, Behind the Thrills, and MiceChat His blog, ThemedReality.com takes an unconventional look at the attractions industry. Follow on twitter @ThemesRenewed Joe lives in Sacramento, California with his wife, dog, and a ghost.
Share
Facebook
Twitter
Linkedin
Email
Print
WhatsApp
Pinterest
ReddIt
Tumblr
Previous articleDynamic Attractions: Orlando meets Moscow
Next article“Flying Dreams”: Eyes in the skies