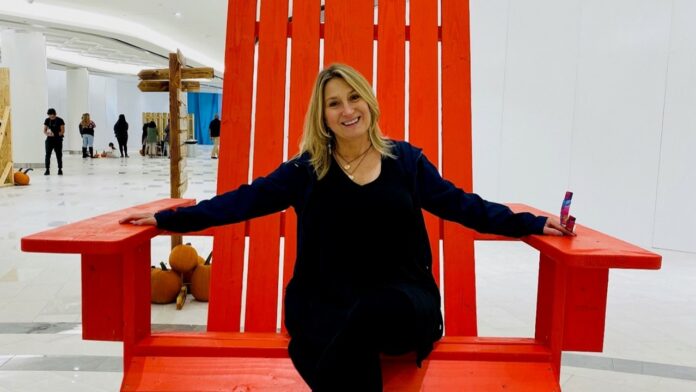 Trent Oliver wanted to be Evel Knievel when she grew up. While her eventual choice of career may not involve death-defying feats, Oliver and her award-winning interactive media company, Blue Telescope, share Knievel’s desire to push the boundaries of human experience. And as the incoming Eastern Board President of the Themed Entertainment Association, Oliver got the chance to reconnect with this childhood dream when she presented a Thea Award to the Evel Knievel Museum in 2019.

“Interactive media entrepreneur” did not immediately follow “motorcycle daredevil” on Oliver’s career bucket list, but it turned out to be the natural extension of her early life and career. As an “Air Force brat,” she attended 13 elementary and high schools. As a young adult she continued to move around, attending multiple colleges. It wasn’t until she moved to New York City in the late 1980s that she finally found a place to call home, that satisfied her restless curiosity and independent spirit.

After a successful early career as a media and live entertainment producer, Oliver felt it was time for a new challenge and founded her own company, Blue Telescope, in 2001. As her own boss, she could “extend the limits of possibility.” She was drawn to interactive media because within it she found the convergence of live theater, interactive theater and film but also an added opportunity to create personalized experiences. “I had this idea that owning my own company wasn’t any harder than freelancing,” says Oliver. “That’s insane – it’s like apples and kumquats! Luckily, I thrive in chaos, and change doesn’t bother me. Working in this business and traveling way too much fits, and owning a company fits because I’m so used to going my own way. I just listen to myself, which gets you into good and bad situations.”

Blue Telescope has been innovative and successful over the past two decades. The company has received over 100 awards for developing media interactives that tell powerful stories and are built with a wide variety of interaction models, technology platforms, and user-interface approaches. These approaches include custom content management, AR and VR interaction, RFID and sensor programming, traditional and non-traditional projection, narrative audio and video, motion graphics, web and mobile app development, and custom hardware fabrication. Based in Manhattan, the company expanded to Orlando in 2018, though the team – a close-knit group of full-time staff and long-time specialty collaborators – has worked almost exclusively remotely during the pandemic.

The art and science of creating radically

Blue Telescope prides itself on being “radically creative and fiscally intelligent.” As Oliver explains, “we always ask ourselves, ‘how can we push the boundaries more within what the client can spend?’ We challenge clients to think about their attractions long-term, which won’t always lead to the least inexpensive solution (though usually not the most expensive either). What it will lead to is the most durable solution and the one that best captivates the guest. Blue Telescope’s first and foremost concern is creating a full human experience. AR, VR, or gesture based technology are simply vehicles for delivering that human experience. It’s all about you participating in the story, not the story being pushed at you.”

This visitor-focused philosophy has garnered Blue Telescope a variety of high-profile museum, corporate, and entertainment clients, such as Holland America Line, the National Museum of Mathematics, the USS Intrepid, Liberty Science Center, the New York Hall of Science, NPR, and Pfizer. Blue Telescope’s latest project, “Driven to Win: The History of Racing in America,” at The Henry Ford, was recently named “one of the most enticing exhibits across the US” by USA TODAY and the company looks forward to two more exhibit openings later in 2021.

One Blue Telescope project particularly dear to Oliver’s heart involved developing an interactive game for “Rightfully Hers: American Women and The Vote,” a National Archives exhibit commemorating the ratification of the 19th Amendment. “Thirty years ago, as part of my research for a project on Ellis Island, I got to peruse the National Archives, white gloves and all. That was a more exciting moment for me than all the celebrities I had met as a producer. To be able to work with the National Archives a few decades later on a women’s suffrage exhibit was a dream come true. I hired fantastic female illustrators, and it just made me very proud.”

Supporting other women has been a long-standing mission for Oliver, who has faced her own set of challenges as a female business owner. “There are times when I feel like I should go into central casting. Find a tall, handsome, 30-something, cisgender, straight white guy with dark hair. Name him Trent Oliver, and see if he would get more work.” Because of what she calls her “androgynous” first name, clients are often surprised when she walks through the door. “In the early days, I got jobs because they saw my name on paper and thought I was male. Since I was already in the door, I just put my head down and kept working. Before long, they would see what I could do.”

That same spirit of determination has helped guide Oliver and Blue Telescope through two decades of industry fluctuations, including the 9/11 terrorist attacks, the 2008 economic shutdown, and now the COVID-19 pandemic. Oliver credits the company’s small size, scrappy attitude, and passion for innovation for keeping the company afloat over the last 21 years. “Same ‘ol same ‘ol is boring, and so is following the leader. So instead, we are constantly reading and reinventing. We are constantly looking at interesting media, at all kinds of art. We challenge ourselves: what is an artful way to show something, to be impacted by a performance or creation? You know you’re feeling an emotion, but you’re not quite sure how or why. Getting to the reason behind that feeling in yourself is an important step in creating emotional experiences for others.”

A Time of Convergence

Creating unique emotional experiences that resonate has become increasingly challenging in an industry where the lines between verticals are quickly blurring. “I believe we’re in an amazing time of convergence,” says Oliver. “Themed entertainment experiences, retail, museums – we’re all talking to the same audiences, and audiences’ standards are higher than ever before.

I truly believe that visitors want emotional and intellectual depth akin to what they would get from museums, fun and play like they would get at a theme park, and the same kind of unique retail opportunities they would get from a brand attraction – all in one experience. This convergence will challenge all of our industry sectors to step up their game moving forward.”

Moving forward to Blue Telescope’s next 21 years, Oliver believes the company will continue to challenge the limits of possibility. “Twenty years from now, I want the company I founded to be far bigger than me. I want people to say, ‘oh my God, we get to work with Blue Telescope!’ I want to be known for doing epic, gorgeous, mind-blowing work. That is larger than any one human.”

Tangled Up In Blue: Trent Oliver’s Thoughts on Projects, Processes, and People • “All experiences need to speak to different people. It’s not just gender, race, physical abilities, but also education level. Whatever you’re creating, don’t just have PhDs in the room – you’ve got to have everybody.”
• “If you want to learn something, find out who is the best at it. Because they are not worried about you taking their job, and they’re honored that you value their opinion.”
• “A great project has a good tension between excellent project management and super strong creative. Creative needs to fly and be aspirational and not worry about making sure everybody else gets their work done and be cared for. Creativity is something to nurture.”
• “You have to always ask why are you doing this. Why is this project important? It can’t just be money. It needs to be something in it that makes your heart soar. And how could we do it a little bit better? If you were doing it just for yourself what would you add to it?”
• “I’m really good at leading creative teams, because I hire the right people and give them the vision.”

Nicolle Figueroa Rosado is a project manager, producer, and educational content creator with a passion for stories. She has worked in museums as well as theme parks, producing visitor experiences that straddle the line between education and entertainment. Now, her work helps organizations across both industries create experiences that are inclusive, accessible, and equitable to all guests.