Liberty Science Center: To the stars 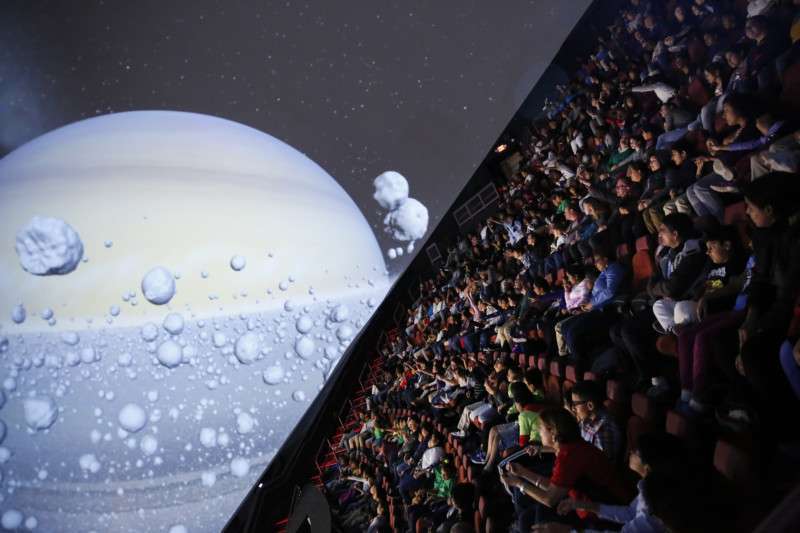 In December 2017, Liberty Science Center (LSC) in Jersey City, New Jersey opened the largest and highest resolution planetarium in the Western Hemisphere. Since opening, the new Jennifer Chalsty Planetarium has been covered by the New York Times, Forbes, Washington Post, Time Out, Space.com, Popular Mechanics, and ABC News, in addition to numerous media outlets in the Garden State and quite a few mom bloggers.

On the industry level, the story is big in a different way. The new planetarium grew out of converting the museum’s giant dome theater from 1570 film to digital. The conversion didn’t just transform a theater with an 89-foot (27-meter) diameter dome. It fueled an expanded programming and educational vision for LSC and a rebranding of the facility, and it achieved a major milestone in the planetarium-giant screen convergence.

Located on the bank of the Hudson River near the Statue of Liberty, the 300,000 square foot science center celebrated its 25th anniversary in January 2018. LSC has annual visitation of 650,000 and is billed as the largest interactive science center in the NYC-NJ metro area. More than 250,000 students visit each year, with tens of thousands more via offsite and online programs.

“I sat down in the middle of the theater. I watched as constellations outlined themselves on the night sky, flew across Central Park, and through the Orion Nebula. Then I went on a roller coaster ride of a Möbius strip that was more intense than some theme-park attractions,” Mary Beth Griggs wrote about the new planetarium at LSC in Popular Science (“Planetariums seem old-school, but they have a surprisingly lively future,” December 19, 2017).

“When our IMAX Dome Theater technology was approaching end of life, LSC jumped at the opportunity to reimagine the space,” said Mike Shanahan, who joined as planetarium director in September 2017, coming from the Bishop Museum in Honolulu. “Doing so has exponentially increased the number of people we can deliver astronomy-based programming to and attracted even more people to LSC. Nowhere else in the region can students experience the space science standards in such a fully immersive manner.”

Besides the simple fact of status that size confers, why is bigger better? “When trying to show detail in an image of the rings of Saturn or the clouds of Jupiter, it’s just easier to explore that detail in a large image,” said Shanahan. “And being able to accommodate 400 people per program has really helped to meet the high demand for our programming. The planetarium response has been tremendous. Overall attendance at LSC has been very strong with planetarium shows often selling out.”

LSC’s new projection technology package, with the new Digistar system, Christie projectors and repaneled screen at the heart, enables it to perpetuate the venue’s giant screen cinema exhibition capabilities while adding state-of-the-art planetarium functionality with access to everything in the Digistar toolbox. The theater retrofit also includes a DCI-compliant projection system, new seating, and new lighting and sound systems.

Michael Daut, director of Product Marketing for E&S, noted that at the time of the RFI (request for information), Digistar 6 had not yet been released, but was available by the time of the RFP (request for proposal), allowing them to offer all the latest improvements and tools such as Domecasting; enhanced terrain for the moon, Earth, and Mars; Data2Dome implementation; and native support for Unity 3D, among other features.

As consultant to LSC, Paul Fraser of Blaze Cineworks helped engineer the RFI and RFP processes that led to selecting the new systems, over the course of two years (2015-2016).

A result of the RFI process was a request for Blaze to dive deeper into the planetarium option. Fraser delivered a report that would include planetarium programming and giant screen documentaries repurposed for fulldome. Not long after, Jennifer Chalsty, a philanthropist and member of the LSC Board, became a primary benefactor.

A symbol of the convergence

What happened in the evolution of LSC’s vision and the system ultimately installed represents a fulfillment of the convergence of markets and technologies, bringing the planetarium and giant screen industries together. This process has been underway for decades, as fulldome systems have steadily improved since the first permanent installations in the 1990s.

E&S has been positioning and developing its product lines for such a moment as this, and the E&S True8K Digistar fulldome system won the day – and the night sky.

“The team at Liberty Science Center entered the process with an interest in 8K,” said Daut. “Some of them were present at the E&S and Christie True8K demo at the October 2016 Giant Screen Cinema Association’s annual conference in Toronto. The E&S 8K system has the image quality to surpass and decisively replace 1570 film, and we have the largest library of planetarium shows and giant screen film content digitized for domes.”

For concerns about replacing a single film projector with multiple digital projectors, Daut cites Digistar’s auto alignment and blending features, which coordinate well with the Christie projectors. “They make manual alignment a thing of the past,” he said. “We knew we had to provide a consistently seamless image to make a multi-projector solution viable. It’s a big, big dome, and takes a lot of light to fill up and lots of pixels to make it look spectacular. Liberty Science Center needed the 10-projector recipe for a beautiful, bright, high-resolution image.”

“The automated system works very well, both in terms of the blend and the alignment,” said Shanahan. “A great deal of care was put into setting the 10 Christie projectors so that no one sitting in any seat would get the light in their eyes; the solution of placing four projectors in front and six in back worked out well. The renovation also ‘completed’ the dome so that it covers a full 180 degrees.”

“LSC is a good model for dome operators looking to build on their business,” said Fraser. “Adding a planetarium system can be seen as 1+1=3 because you’re adding a whole new content stream. These are all singing, all dancing, wonderful immersive theaters that can do many things.”

While LSC is the largest example, the first museum to expand its educational offerings in this way – discovering and leveraging the capabilities of a new digital planetarium system in the course of converting an IMAX film dome and bringing in a dedicated planetarium specialist – was the Science Museum of Virginia in Richmond. Its theater was renamed “The Dome” and reopened in 2014 with an E&S Digistar 5 8K system with five Christie D4K25 projectors. The museum’s new “immersive experience specialist”

Operators, especially of giant domes (over 60 feet in diameter) have taken longer to convert from film to digital systems because of quality concerns. But while there will always be upgrades and improvements, the adoption of 8K systems for giant domes indicates that a quality threshold has been reached. As the example of LSC shows, reaching and crossing that threshold opens the door to additional possibilities. • • •

This article first appeared in The Planetarian, published by the International Planetarium Society (www.ips-planetarium.org) and is reprinted here with permission.

The combination: E&S, Digistar and Christie

Christie projectors are often integrated into E&S Digistar systems. The custom LSC Digistar 6 system features 10 Christie Boxer 4K30 projectors. “The Christie Boxer projectors have been a workhorse for us,” said Michael Daut. “One of their many great attributes is flexibility; you can install a Boxer at any angle, any position, even straight up or down; they are that flexible. For a tilted dome such as the theater at LSC, that means you can position the projectors exactly as needed for the best audience sightlines. Christie has done a great job of eliminating those kinds of limitations and making even tricky installations possible.”

Daut reported that the same projector recently served well for two temporary installations, both high-profile Digistar demonstrations. One employed 10 Boxers at Ontario Science Centre in Toronto in 2016 in connection with a meeting of the Giant Screen Cinema Association (GSCA); the other used 5 Boxers at the Saint Louis Science Center as part of the Pleiades Planetarium Conference in 2017. The Toronto installation featured split screen demonstrations comparing 1570 film projection side by side with Digistar True8K digital fulldome. “The projectors were positioned in front of the theater and the audience,” said Daut. “Even with those limitations, they performed extremely well; aligning seamlessly and producing beautiful images, in addition to withstanding the rigors of shipping. They’re just very reliable. The power of Digistar technology and E&S engineering combined with the Christie projectors’ image quality made this demo a huge success and left an indelible impression on the giant screen cinema community.” 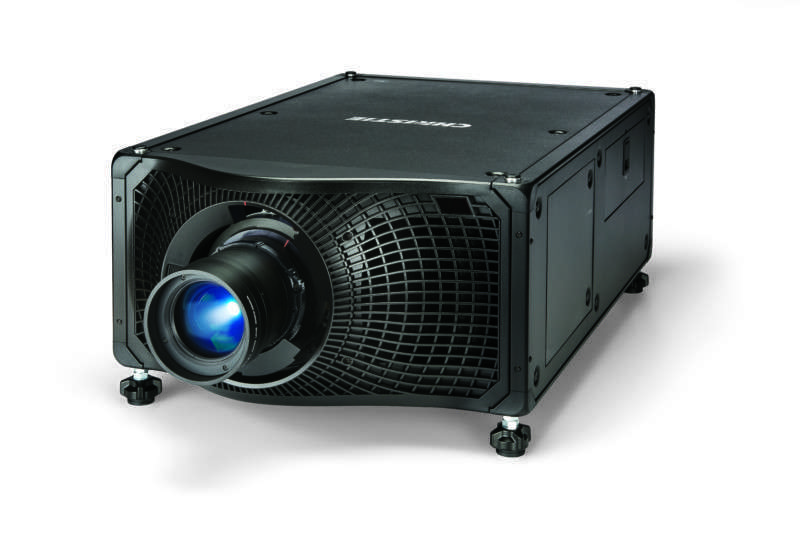 Both Christie and E&S are visibly invested in serving the planetarium and giant screen sectors. Each is a well-established technology and manufacturing company (E&S has celebrated 50 years; Christie has been in business nearly 90 years) and offers a suite of innovative display products developed in response to market and customer needs. Each is actively represented within trade organizations.

Joe Kleimanhttp://wwww.themedreality.com
Raised in San Diego on theme parks, zoos, and IMAX films, Joe Kleiman would expand his childhood loves into two decades as a projectionist and theater director within the giant screen industry. In addition to his work in commercial and museum operations, Joe has volunteered his time to animal husbandry at leading facilities in California and Texas and has played a leading management role for a number of performing arts companies. Joe has been News Editor and contributing author to InPark Magazine since 2011. HIs writing has also appeared in Sound & Communications, LF Examiner, Jim Hill Media, and MiceChat. His blog, ThemedReality.com takes an unconventional look at the attractions industry. Follow on twitter @ThemesRenewed Joe lives in Sacramento, California with his fiancé, two dogs, and a ghost.
Share
Facebook
Twitter
Linkedin
Email
Print
WhatsApp
Pinterest
ReddIt
Tumblr
Previous articleDubai Expo 2020: Sustainability, mobility and opportunity
Next articleDynamic Motion Rides: Flying for all