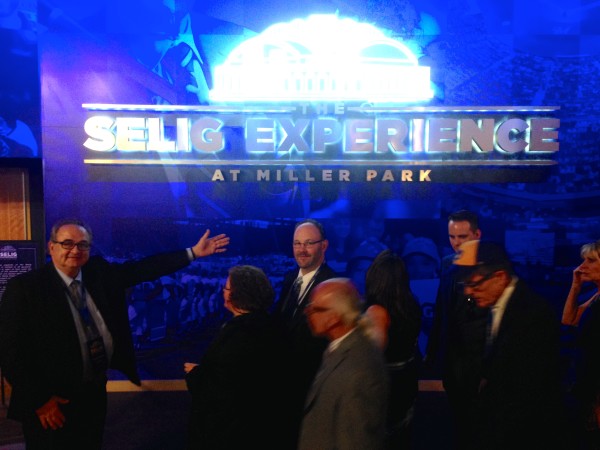 Nestled in a corner of the Loge Level at Miller Park in Milwaukee, WI, The Selig Experience brings together the worlds of destination-based themed entertainment and sports history. The attraction is a journey through one man’s life: Alan H. (Bud) Selig. Credited with bringing major league baseball back to Milwaukee, Selig is a former owner of the Milwaukee Brewers and Commissioner Emeritus of Major League Baseball. 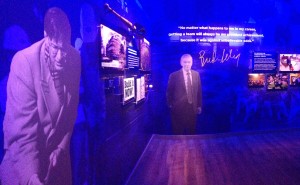 To tell the story, the Brewers engaged BRC Imagination Arts to develop a ten minute show and experience that captured Selig’s story, which is also the story of Milwaukee baseball.

Inside the theater, three benches seat 35 guests that face three screens, which show baseball cards from the Brewers’ past. The film touches on how Selig grew up loving baseball and eventually fought to bring the Brewers to Milwaukee, when hope for a major league team had faded. Selig’s next major achievement was when he convinced state officials to build Miller Park, one of the most advanced stadiums in the country. Finally, the film looks at Selig’s impact to the larger game of baseball as Commissioner.

At the end, one screen raises and Bud appears, standing in a life-size recreation of his old office, extolling the virtues of baseball. The effect is a simple one, and while many refer to Bud as a hologram, BRC’s Bob Rogers characterizes it as a “significant digital improvement on Pepper’s Ghost effect.”

Following the show, guests are led into the Bud’s office, with its trademark piles of papers and a smoking cigar in an ashtray. From there, guests enter a small room with Selig memorabilia on the walls, as the next group is ushered into the theater.

Placing the experience into a category is challenging. Officials refer to it as a multimedia presentation but it is much more than that. The best description comes from BRC’s Christian Lachel, who calls the experience an “emotional souvenir,” a gift to the fans of the Brewers.

BRC’s Rich Procter, who wrote the script for the show, wanted people to understand at the end that “I’m in this beautiful stadium tonight because of Bud Selig.” He credits the success of the show to the Brewers’ motivation, which was purely to do something nice for Bud and the fans. “It’s a wonderful place to start a project from,” said Procter.

Brad Shelton, BRC’s Creative Director on the project, agrees that the story behind the project is what drives its success. “All the technology is meaningless without a great story – and what a great story this is,” said Shelton.

“When I watched the film it was really emotional,” said Selig. “What you see here is a little boy’s dream that came true.”

In addition to the story being fascinating, the work that went into the space that houses the experience is noteworthy in its own right. In order to isolate the theater space from all the noise and vibrations 40,000 fans make during a game, the theater is built within a larger room. Two ceilings, and two sets of walls, with an air gap between, eliminate noise and vibrations. Nat Stein of Uihlein-Wilson Architects explained that resilient connections in the ductwork and piping absorb any vibrations and is kept separate from the main building structure.

Tech MD created a projector stabilizing system that keeps the projectors from moving when the floors shake (presumably after a home run).