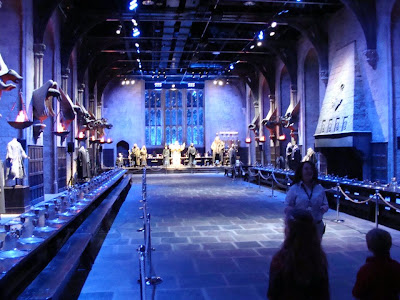 Warner Bros. Studio Tour London – The Making of Harry Potter is a behind-the-scenes walking tour which features the authentic props, sets and costumes used in the world’s most successful film series. Based at the studios where the films were made, the Studio Tour gives visitors a glimpse into the incredible craftsmanship and artistry that went into the production process.

The Themed Entertainment Association (TEA) is the leading organisation representing the world’s top creators, developers, designers and producers of compelling visitor experiences, attractions, exhibits and places. The Thea Awards are the highest honour bestowed by the association in the themed entertainment profession. Since Thinkwell’s founding in 2001, nine of the company’s projects have received Awards.

Sarah Roots, Vice President of the Studio Tour, commented: “We are thrilled to win this award which is the ultimate industry accolade. It’s fantastic to get recognition at this level for the attraction.”

“Working with Warner Bros. on this project and helping to bring an entirely new dimension to the world-famous Harry Potter franchise was an honour; we are so proud of the end result and its incredible reception by visitors from all over the world,” said Joe Zenas, CEO, Thinkwell.

Warner Bros. wanted to produce a truly one-of-a-kind immersive experience and worked closely with Thinkwell to fulfil this vision. The 150,000 sq. foot attraction gives the general public an unprecedented opportunity to tour several of the original Harry Potter film sets, see many of the iconic costumes, creatures and props from the films. Thinkwell conceived and produced more than 100 minutes of original media featuring the stars of the film, as well as custom media for the handheld digital guide.

About The Themed Entertainment Association (TEA)
The Themed Entertainment Association (TEA) is an international non-profit association representing the world’s leading creators, developers, designers and producers of compelling places and experiences. TEA members bring the experience of engaging storytelling and entertainment to a vast number of casinos, restaurants, retail stores, museums, zoos, theme parks and an ever-growing list of destinations that aim to bring a higher level of visitor experiences worldwide. TEA provides the proper channels and opportunities to network, educate and help businesses or careers grow.

About Thinkwell Group, Inc.
Founded in 2001, Thinkwell is a full-service experiential design and development firm that collaborates with its clients to envision, strategize and create immersive, one-of-a-kind guest experiences. Thinkwell develops and produces attractions, master plans, brand experiences, exhibits, live shows, environments, multimedia and digital integration for clients around the world. The company has become a leader in experiential design by bringing a unique holistic approach to every creative engagement, delivering extraordinary results to notable clients over the years, including Fortune 500 companies, studios, museums, theme parks and destination resorts. Recognized globally for its expertise in creating unique and memorable guest experiences, Thinkwell was hired in 2011 by the London Organizing Committee to serve as consultants for the 2012 Olympics’ Spectator Experience at Olympic Park, consulting on all touch-points of the property.

Joe Kleimanhttp://wwww.themedreality.com
Raised in San Diego on theme parks, zoos, and IMAX films, InPark's Senior Correspondent Joe Kleiman would expand his childhood loves into two decades as a projectionist and theater director within the giant screen industry. In addition to his work in commercial and museum operations, Joe has volunteered his time to animal husbandry at leading facilities in California and Texas and has played a leading management role for a number of performing arts companies. Joe previously served as News Editor and has remained a contributing author to InPark Magazine since 2011. HIs writing has also appeared in Sound & Communications, LF Examiner, Jim Hill Media, The Planetarian, Behind the Thrills, and MiceChat His blog, ThemedReality.com takes an unconventional look at the attractions industry. Follow on twitter @ThemesRenewed Joe lives in Sacramento, California with his wife, dog, and a ghost.
Share
Facebook
Twitter
Linkedin
Email
Print
WhatsApp
Pinterest
ReddIt
Tumblr
Previous articleWhiteWater Awarded Three IAAPA Brass Rings
Next articleDisney Projects in California and Hawai’i Receive Thea Awards