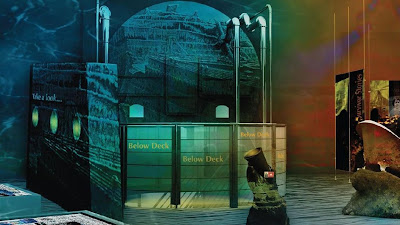 The exhibit, opening on April 12, marks the 100th anniversary of the maiden voyage and sinking of the celebrated ocean liner. It is the product of a collaboration between Tim Delaney, the former Walt Disney Imagineering designer and head of Tim J. Delaney Design, and famed oceanographic explorer Dr. Robert Ballard, president of Sea Research Foundation’s Institute for Exploration, who led the 1985 expedition that first located the sunken Titanic. The Ocean Exploration Center renovation and its inaugural Titanic – 12,450 Feet Below exhibit are sponsored by United Technologies Corporation.

Sea Research Foundation President & CEO Dr. Stephen Coan has called the project “A unique and important collaboration that will give people a chance to experience the Titanic through the eyes of the person who found her, someone recognized as one of the world’s greatest explorers, and through the imagination of a world-renowned exhibit designer.”

Tim Delaney described the exhibit as “a very different approach to the Titanic experience, one that taps directly into the excitement of exploration and discovery. We’ve created something that both adults and children will find thrilling, immersive, interactive, experiential and memorable. Titanic – 12,450 Feet Below takes you there.”

Bringing the legendary vessel’s timeless history to life, Titanic – 12,450 Feet Below captivates minds with a glowing iceberg that is cold to the touch, a bi-level adventure area inspired by Titanic’s engine room, hands-on experiences that unfold Titanic’s lingering mysteries, and modern deep-sea technology that led to the discovery.

“The Titanic sinking is, of course, one of the greatest dramas of the last century,” said Dr. Ballard. “Everything about her conception, construction, launch, passage, passengers, loss and legend is fascinating. I believe that the excitement of discovery is transferable and can inspire future generations of explorers and discoverers. That’s what Titanic – 12,450 Feet Below is all about.”

The exhibit opens to the public on April 12 at Mystic Aquarium in Mystic, Conn. Admission is included with general admission prices and membership. 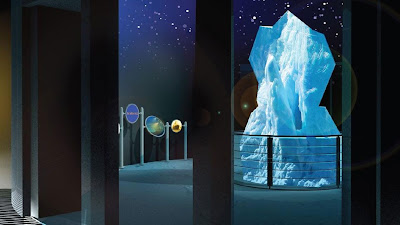 ABOUT SEA RESEARCH FOUNDATION
Based in Mystic, Conn., Sea Research Foundation is a 501(c)3 nonprofit organization that operates Mystic Aquarium, Institute for Exploration and, in partnership with National Geographic Society, The JASON Project and its Immersion Learning program. The mission of Sea Research is to inspire people to care for and protect our ocean planet through education, research and exploration. Sea Research receives major support from United Technologies, The Coca-Cola Company and Foxwoods Resort Casino.

www.searesearch.org
ABOUT TIM J. DELANEY DESIGN
Tim Delaney’s 34 years at Walt Disney Imagineering included 19 years as a creative director and Vice President of Design. He has been instrumental in all phases of design from initial concept through design development, corporate sponsorship, project production and onsite construction supervision through completion. As a designer, illustrator, painter, creative director, producer and art director, Delaney has lead teams that have designed and constructed over $1.2 billion of Disney Parks and attractions worldwide, including Anaheim, Orlando, Paris and Hong Kong.

Beyond his signature design and production capabilities, Delaney has assembled creative teams, and collaborated with all disciplines, while always maintaining the highest standard of design excellence, with all projects delivered on time and on or under budget.
www.timjdelaney.com

Joe Kleimanhttp://wwww.themedreality.com
Raised in San Diego on theme parks, zoos, and IMAX films, InPark's Senior Correspondent Joe Kleiman would expand his childhood loves into two decades as a projectionist and theater director within the giant screen industry. In addition to his work in commercial and museum operations, Joe has volunteered his time to animal husbandry at leading facilities in California and Texas and has played a leading management role for a number of performing arts companies. Joe previously served as News Editor and has remained a contributing author to InPark Magazine since 2011. HIs writing has also appeared in Sound & Communications, LF Examiner, Jim Hill Media, The Planetarian, Behind the Thrills, and MiceChat His blog, ThemedReality.com takes an unconventional look at the attractions industry. Follow on twitter @ThemesRenewed Joe lives in Sacramento, California with his wife, dog, and a ghost.
Share
Facebook
Twitter
Linkedin
Email
Print
WhatsApp
Pinterest
ReddIt
Tumblr
Previous articleDisney Aims to Increase Lantau Island Tourism in Hong Kong
Next articleBrian C Witherow Appointed CFO at Cedar Fair