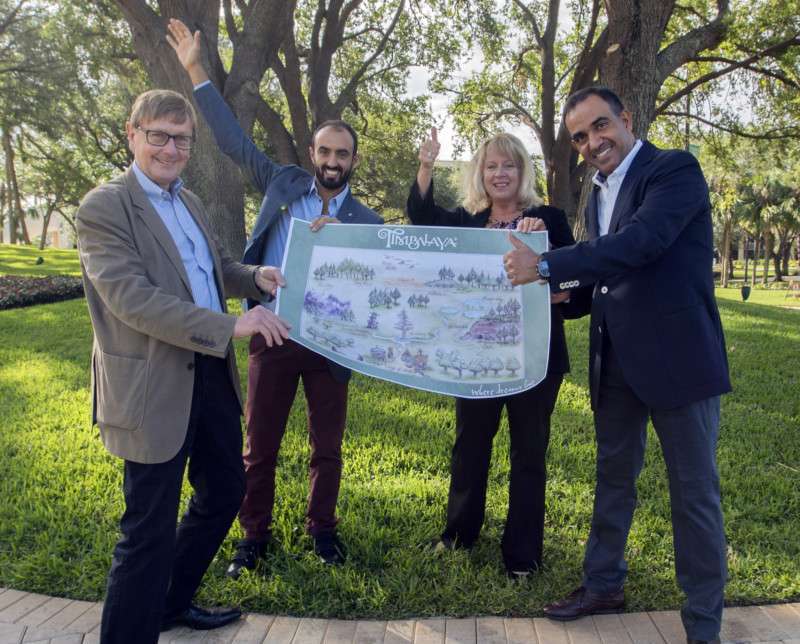 Timbalaya, the story-led IP and outdoor natural play attraction, has signed its first franchise deal, with the Touristic Enterprises Company (TEC) in Kuwait.

Work is expected to begin in 2018 to build the mid-size Timbalaya attraction, with the circa £4 million project slated for a late 2019 or early 2020 opening. Timbalaya has also hinted that conversations with some European sites are quite far advanced and another announcement is expected in early 2018.

“We’re excited to see the very first Timbalaya going to Kuwait. We have had several groups interested in building a Timbalaya attraction, but TEC have just moved faster and as a result Kuwait will be the first to enjoy this incredible experience,” says Timbalaya’s Sylvia Matiko, Guardian of the Locket.

The UK-owned Timbalaya is all about adventure, play and imagination. At its heart, Timbalaya is a children’s adventure story based around the village of Wishing – a magical place where dreams are made, wishes come true and imaginative play is created through the escapades of three friends and intriguing characters such as Buzzbirds, the Borroble Bear and Spangle Stargazer. The attraction brings the scenes of the book to life with distinctive features that draw us in; the amazing view from Spangle Stargazer’s Tower, kinetic structures, riddles and games dotted around the park, water play, parades and performances.

Established in 1976, the Kuwait-based TEC is the chief authority responsible for the regulation, development, and promotion of the tourism, entertainment and recreation sectors in Kuwait. Considered a pioneer on a regional level, the Company has largely been responsible for the development of these sectors in the country, through its expansive portfolio of projects and facilities. Today, TEC oversees recreational parks, leisure clubs, maritime facilities, as well as one of Kuwait’s biggest cultural landmarks: the Kuwait Towers.

“As part of our development and expansion plans at TEC, we are always looking to partner with experts from around the globe to bring the people of Kuwait exciting and innovative entertainment experiences,” said Abdul Wahab Al-Marzouq, Chief Executive Officer at TEC. “Timbalaya is a fresh idea and new concept that we felt would be a perfect fit, and would give us a completely new experience that we have not seen before in this region.”

Sylvia Matiko, goes on to say “We couldn’t be more thrilled to be heading to Kuwait. The healthy development of children is at the very heart of Timbalaya and to have found a likeminded company in TEC is exciting for all of us.  They understand the benefits of imaginative and physical outdoor play to the wellbeing of our children.”

Designed for families with children under 12 years, the concept is all about joining in. Simon Egan, Guardian of the Land says “Children have to get physically active, to join in and play within the story. There are clues and goals that are rewarded on every level. Simply put, children and their families don’t watch, they become, and are themselves, the experience.”

Each attraction is a bespoke design to fit into the landscape and its environment. “There’s no cookie cutter approach to Timbalaya” says Guardian of the Stargazers Nick Farmer. “The Kuwait attraction will without doubt be different to the designs being considered in Europe at the moment. The landscape is a unique mix of desert, palm trees and arid region greenery, and of course Kuwait enjoys almost 500km of coastline along the Arabian Gulf, which gives it a very particular feel. This together with the challenges of a climate that can become very hot in the summer, although not all year, will certainly keep our design team busy over the coming months. But what a lovely project to have – we can’t wait to get started.”

Joe Kleimanhttp://wwww.themedreality.com
Raised in San Diego on theme parks, zoos, and IMAX films, InPark's Senior Correspondent Joe Kleiman would expand his childhood loves into two decades as a projectionist and theater director within the giant screen industry. In addition to his work in commercial and museum operations, Joe has volunteered his time to animal husbandry at leading facilities in California and Texas and has played a leading management role for a number of performing arts companies. Joe previously served as News Editor and has remained a contributing author to InPark Magazine since 2011. HIs writing has also appeared in Sound & Communications, LF Examiner, Jim Hill Media, The Planetarian, Behind the Thrills, and MiceChat His blog, ThemedReality.com takes an unconventional look at the attractions industry. Follow on twitter @ThemesRenewed Joe lives in Sacramento, California with his wife, dog, and a ghost.
Share
Facebook
Twitter
Linkedin
Email
Print
WhatsApp
Pinterest
ReddIt
Tumblr
Previous article
ADG Receives IAAPA Brass Ring Award for Adventure Lagoon
Next article
Alcorn McBride Introducing New Features and Capabilities to its Product Line at IAAPA Attractions Expo