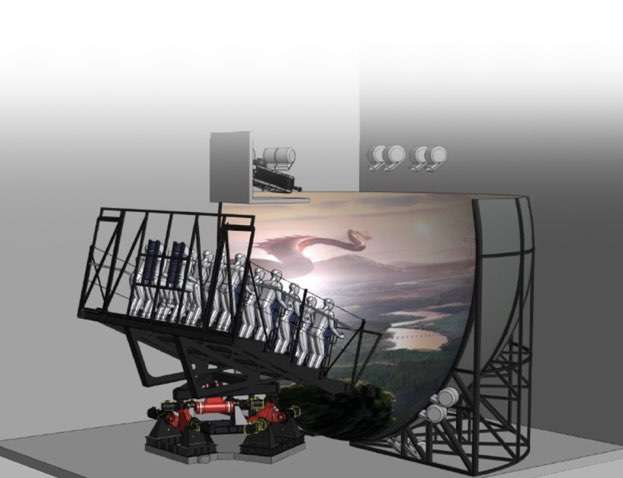 Flying theaters have earned their spot in major theme parks and attractions around the globe. As the technology has evolved and become more accessible, smaller attractions are also seeking the advantages of a flying theater. We at Dynamic Motion Rides have taken a look into these markets and their needs. 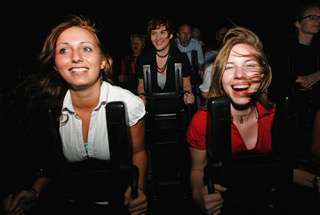 When we started developing our newly patented motion system technology and implementing it in new attractions a couple of years ago, our engineers certainly had major theme parks in mind where space and room height is normally no problem. The company was then approached by The Museum of the Bible in Washington DC, asking if a great flight experience could also be done in a smaller venue with less room height.

This request started a thought process within Dynamic Motion Rides. First we asked ourselves, “What are the framework conditions for smaller theme parks, visitor centers, museums, zoos, aquariums and stand-alone attractions?” We spoke with a couple of operators and it became clear very quickly that this question cannot be reduced to simply “less space.” There were some needs that seemed universal for bringing a flying theater to a smaller facility:

• High reliability (with minimal down time)

In the development process that followed, every measure taken was driven by these points. For example, the DyMoRides team carefully considered screen design, sightlines and positioning of the guests to be able to create an experience comparable to a Soarin’-style flying theater in its intensity and immersiveness.

This was achieved by placing all guests in the center of the dome screen for perfect sightlines, maintaining a specific ratio of screen-size to platform-size. Furthermore the platform was designed with stadium seating, high steps and an offset of 50% from one row to the other to give every guest the feeling of flying in the front row. This also resulted in a compact overall design of the theater.

Addressing the operating cost factor, we only use electric motors capable of regenerating power in such a way that they create and return energy when a motor slows down, thus reducing power consumption and driving down energy costs. This development also led to a more robust design that increases reliability – our tests show that 99.7% has been achieved.

By approaching all of the points in this fashion, we were able to re-think and re-design, meet all of our goals, and retain quality. We have succeeded in making flying theaters feasible for smaller venues – and attractive in terms of return on investment. 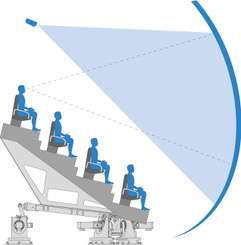 The thorough engineering and design process resulted in two products: Flyboard Flying Theater and Flying Theater 4.0. The base-technology of both products is the same: a tiered platform on top of a 3-DOF electric motion-system capable of being exactly programmed (frame-by-frame) to superimpose movements, thus creating vibration and the fine jiggling that is typical of flying. Flyboard Flying Theater allows guests to lean forward into comfortable Flyboard Support Devices®, further creating an intense flying experience in the style of a prone superhero.

A more traditional approach was taken with Flying Theater 4.0 where guests are seated in separate rows focused on the center of the screen. Both systems offer a range of sizes and capacities. This flexibility enables delivery of highly profitable exciting flying theaters for all types of attractions.

Proof of Concept: The Museum of the Bible

When Carry Summers, president of the Museum of the Bible in Washington DC, approached Dynamic Motion Rides for a flying theater he asked three questions:

• Could we deal with the limited floor loading capacity since the attraction had to be installed on the second floor of the building?

• Could the total cost of ownership be suitable for the museum’s smaller budget?

Based on the parameters that were given to us by the museum, it was determined a Flyboard Flying Theater made the most sense for this project, which we reengineered to fit the lower ceiling height. In addition to meeting the space and load bearing requirements, the compact design and the simple loading and unloading procedures allow for an operation with fewer staff – driving down operating costs. 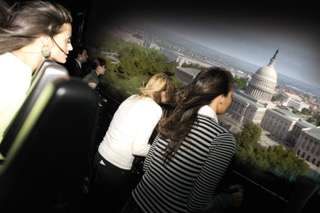 For content, the museum’s request was to show the many impacts the Bible has left in Washington DC during a breathtaking, 4.5 minute flight through the city. The movie, an animation in photo-realistic CGI, was also produced by Dynamic Motion Rides and is called “Washington Revelations.”

Proof of concept came when the museum opened its doors in November 2017 and the general public had the first chance to experience “Washington Revelations.” In a December 2017 Washington Post article, Kathryn Keane, the director of the museum said, “It’s a new platform for storytelling. It allows us to try new things to capture the imagination of young people especially.” (“An amusement-park ride at the museum? Technology makes visitors part of the exhibits,” December 22, 2017)

In the same article, museum president Cary Summers said these experiences may be cutting-edge now [for a museum], but they will soon be the norm. • • •

Joe Kleimanhttp://wwww.themedreality.com
Raised in San Diego on theme parks, zoos, and IMAX films, InPark's Senior Correspondent Joe Kleiman would expand his childhood loves into two decades as a projectionist and theater director within the giant screen industry. In addition to his work in commercial and museum operations, Joe has volunteered his time to animal husbandry at leading facilities in California and Texas and has played a leading management role for a number of performing arts companies. Joe previously served as News Editor and has remained a contributing author to InPark Magazine since 2011. HIs writing has also appeared in Sound & Communications, LF Examiner, Jim Hill Media, The Planetarian, Behind the Thrills, and MiceChat His blog, ThemedReality.com takes an unconventional look at the attractions industry. Follow on twitter @ThemesRenewed Joe lives in Sacramento, California with his wife, dog, and a ghost.
Share
Facebook
Twitter
Linkedin
Email
Print
WhatsApp
Pinterest
ReddIt
Tumblr
Previous articleLiberty Science Center: To the stars
Next articleJRA: Exhibiting signs of laughter

Triotech passes the bar of 100 attractions in Europe