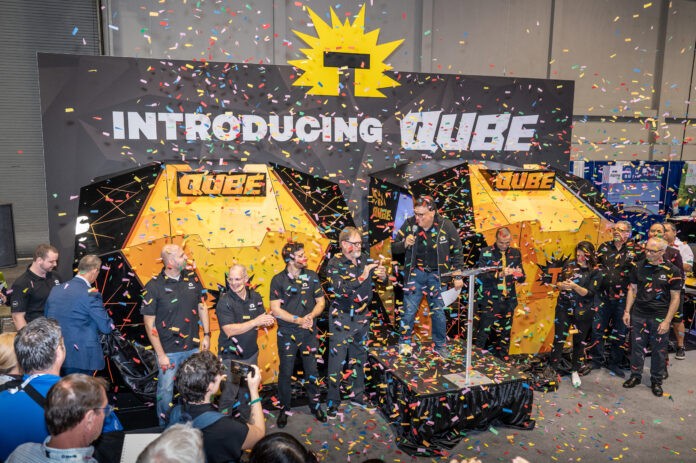 “Qube™ was born from the idea of disrupting the deluxe coin-op video game world by combining the robustness and reliability expected from a coin operated product with an unparalleled sense of immersion”, declared Ernest Yale, CEO & Founder of Triotech. He added: “Key to the Qube™’s success is the fact that we worked closely with customers and distributors during the development and testing phase. The product was designed through close collaboration with distributors and operators of FECs and Arcades. This helped balance excellent game-play, look, and appeal with other important operator benefits such as durability and ease of maintenance.”

The QUBE™ features a 100” 4k projected display, 4 motion seats, wind, blasters, 5.1 surround sound system, and a full library of content powered by the Unreal game engine. Triotech inspired itself from its well-known award-winning XD Dark Ride interactive theater to develop a new game that is affordable to every Arcade and Family Entertainment Center. By making it attendant-free and fitting it in a much smaller footprint, QUBE™ redefines the category of coin-op simulator rides that provides high immersion and friendly competition.

Triotech has committed to develop a full library of content over the next years as the company has done for its other perennial top earners like the Typhoon coin-op video game, interactive coin-op VR simulator Storm™, and its award-winning XD Dark Ride interactive theater.

The company also announced a new major project with LOTTE WORLD. Set for opening in Spring 2023, the innovative walkthrough attraction will be called “BATTLEGROUNDS WORLD AGENT” and will be set in the universe of PUBG: BATTLEGROUNDS,  KRAFTON’s  widely popular I.P.

Triotech designed a walkthrough experience with three zones each containing a distinct attraction levering interactivity, immersion, media, motion, and projection mapping. As guests journey through the highly immersive setting, they will live a group experience 16 persons at a time. The project scope, completed by Triotech’s in-house studio, engineering, and R&D teams, includes design, story, show, theming, audio, as well as special effects. The attraction will cover more than 750 m2 (8100 sq.ft.).

“It’s an honour to have been chosen by LOTTE WORLD to design this new attraction,” mentioned Ernest Yale, President and CEO of Triotech. He added “LOTTE WORLD is a reference in Asia in terms of entertainment and innovation and we are all very excited to create this unique and innovative experience.”

“LOTTE WORLD is proud to present this new project for our park in Seoul. We believe visitors can create wonderful memories because this innovative and immersive experience with the universe of PUBG: BATTLEGROUNDS will be enjoyable to them”, stated Mr. Choi, CEO of LOTTE WORLD.

Upon entering the “BATTLEGROUNDS WORLD AGENT” experience, fans of the well-known game will immediately recognize the PUBG universe. Players board a C- 130 transport plane eager to partake in an epic battleground hosted on the island of Erangel. Things take a dramatic turn when debris from an explosion near an abandoned nuclear facility hits the plane and forces it to crash land at the Sosnovka Military Base. The game takes on new meaning as 16 survivors work as a squad against unfamiliar threats and merciless enemies who will stop at nothing to prevent the players from escaping.

Meet Triotech during IAAPA Expo in Orlando from November 15 to 18 to try QUBE™ on the show floor at Booth 5818.