OCEANEERING: Under the Hood 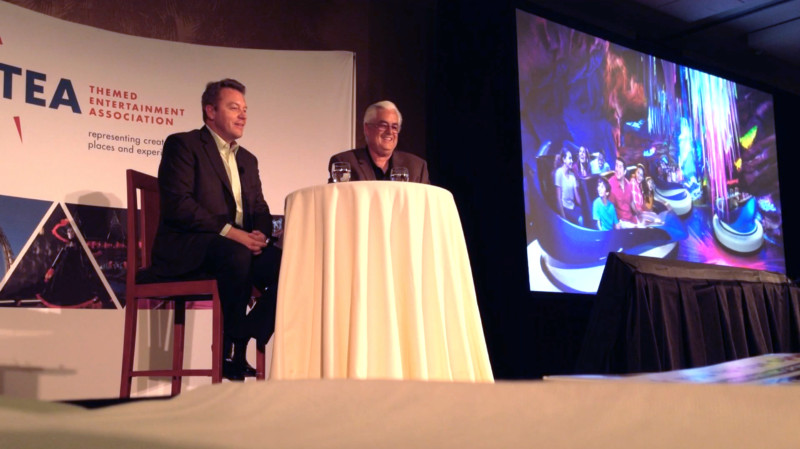 The secret to Oceaneering’s trackless technology

Whether or not you have heard of automated guided vehicles (AGVs), chances are you have already seen them in action. Think of familiar innovations like the disc-shaped robotic vacuum cleaners that zigzag around one’s home, or the self-driving cars that are currently being tested in nine U.S. states. It’s all got to do with AGV technology. Simply put, AGVs are intelligent vehicles that follow a predetermined path based on a combination of software and passive markers, lasers, global positioning systems (GPS), vision aids (cameras) or guide tape for navigation. The AGV industry has been evolving since the 1950s, and, today, these vehicles are used in many industries to transport goods, materials, and even people.

ABOVE PHOTO: Dave Mauck and Bill Bunting answer questions about the Revolution™ Tru-Trackless™ ride system at the 2014 TEA Summit

Oceaneering Entertainment Systems (OES), well known as a dark-ride provider to the theme park industry, is a division of Oceaneering International, Inc. a custom engineering firm that is pushing boundaries and endeavoring to create a safer and more intelligent future in various industries. In 2014, OES was honored with a Themed Entertainment Association (TEA) Thea Award for the breakthrough technology driving its motion base, trackless theme park ride: the REVOLUTION™ Tru-Trackless™ Dark Ride System. The details of this technology have been less well known – until now. For the first time, Oceaneering has agreed to reveal what makes the trackless capabilities of the REVOLUTION system possible and to share the story of what’s “under the hood.”

In 1984, three young graduates of Delft University of Technology in the Netherlands embarked on a new business startup, called Frog AGV Systems. These entrepreneurs had a promising idea: to apply ‘dead-reckoning’ navigation technology to create autonomous vehicles. They were pioneers in the development of this new method to combine vehicles with automated logistics, without a driver and without a set track or visible path. These young innovators worked tirelessly to evolve AGV capabilities and identify new target markets. In 1988, only four years later, their work attracted the attention of another tech innovator (we can’t divulge the name, but it was named after a fruit), which hired Frog AGV Systems to upgrade the company’s warehousing logistics. In the ensuing years, the AGV technology evolved, becoming more and more state-of-the-art, and carrying heavier and larger loads, while using a range of navigation techniques and performing with increasing precision. 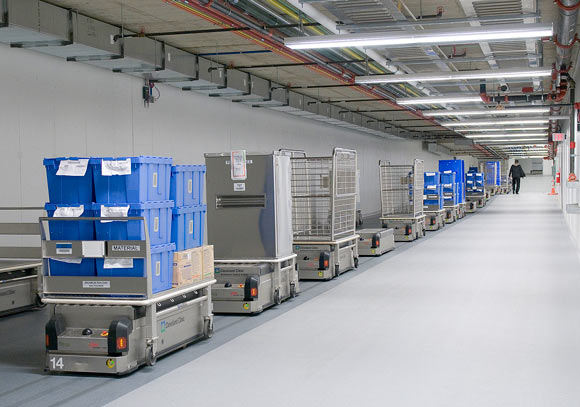 The safety of the AGV system (next to its intelligence, reliability, and high-end technical performance) made it possible to extend its usability in creative ways. Over time it also became more cost-effective. Today AGV systems are more affordable today than ever, and relied upon to support productivity, flexibility and stability in multiple applications. Frog AGV Systems has installed projects globally across diverse markets, including automotive factories, hospitals, warehouse automation, metals manufacturing and processing, container ports, electronics, plastics, and – last, but not least – theme parks.

In 2013, Oceaneering acquired the small Netherlands-based company, which enabled combining Frog’s refined AGV technologies with existing Oceaneering products. OES jumped at the opportunity to work with the new Oceaneering AGV Systems group in developing OES’s very first trackless-ride vehicle, which gained immediate acclaim in the theme park industry and led to its first installations as well as the aforementioned Thea Award. The proprietary Oceaneering REVOLUTION™ Tru-Trackless™ system has been used in several unique attractions, and, with the benefit of the Oceaneering shared services model, continues to benefit from evolving technologies and methods. 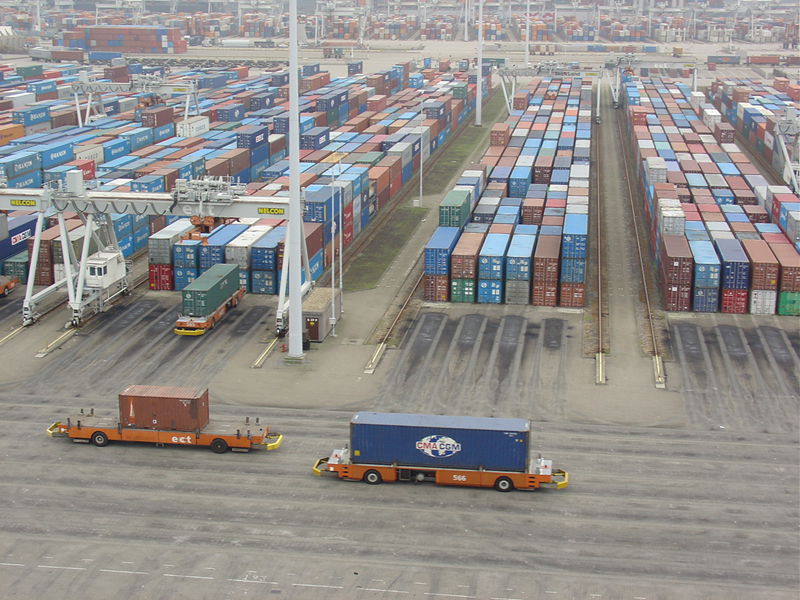 AGVs require the use of some critical technologies: fast-recharging battery power, Wi-Fi, and load-bearing mechanical capabilities. The AGV products that Oceaneering offers are modular, in that each unit can be outfitted for multiple applications. Oceaneering AGVs are designed to lift or pull small, light loads (such as cardboard, metal boxes or plastic totes), as well as extremely heavy loads (such as cars, containers and bulldozers). As an example of a real-world application, at the Port of Rotterdam in the Netherlands, enormous diesel-powered and driverless trucks use Oceaneering AGV technology to move huge shipping containers around the port. It was this kind of large-scale, proven application that enabled OES to apply heavy-cargo lessons-learned to a recent, high-profile theme park project that uses the AGV technology on an enormous ride vehicle that seats several dozen passengers. That critical synergy and application sharing made possible the success of the project. 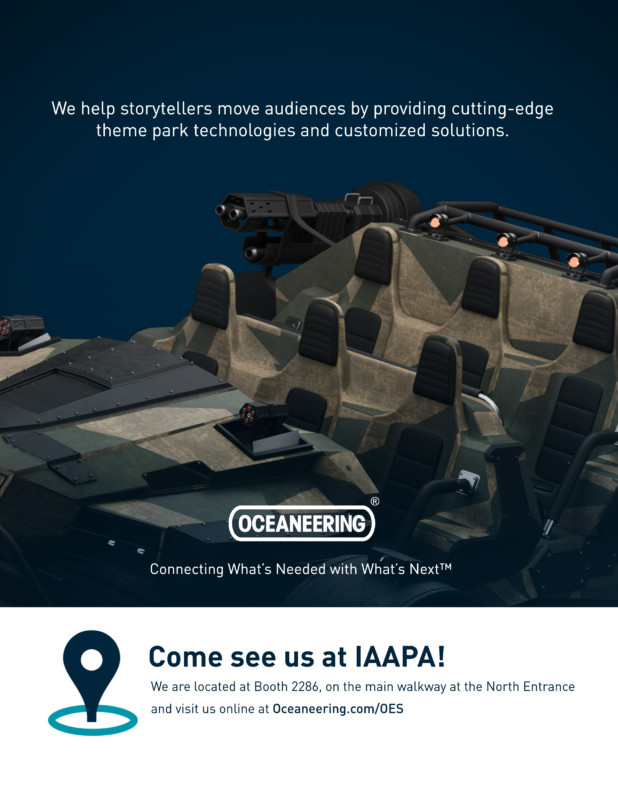 “One of the things I tell our customers is that when you hire Oceaneering Entertainment Systems for your crazy new, never-been-done-before project, you are hiring Oceaneering International,” says Bill Bunting, Director of Business Development for OES. “That we operate on a shared services model means that our customers’ projects benefit from access to the unparalleled knowledge base developed across multiple divisions, with multiple applications experience, and more than 50 years of experience creating custom solutions for the harshest environments known to humankind. Deep water, space, military, and yes, even theme parks!”

The Oceaneering shared services model is the secret to the success of the company’s OES and Oceaneering AGV Systems divisions. As the innovators of safe and reliable systems in a multitude of industries encompassing land, sea and space, Oceaneering looks to the dreamers for inspiration on how to make the world a better, safer place. Often working behind the scenes (such as enhancing the automated factories around the world that build the cars we drive, providing exciting ride experiences in theme park attractions that thrill and enchant, or supporting the exploration of the infinite reaches of space), Oceaneering is there. Our slogan is – Oceaneering: Connecting What’s Needed with What’s Next.™ • • • 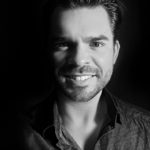 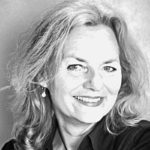 Joe Kleimanhttp://wwww.themedreality.com
Raised in San Diego on theme parks, zoos, and IMAX films, Joe Kleiman would expand his childhood loves into two decades as a projectionist and theater director within the giant screen industry. In addition to his work in commercial and museum operations, Joe has volunteered his time to animal husbandry at leading facilities in California and Texas and has played a leading management role for a number of performing arts companies. Joe has been News Editor and contributing author to InPark Magazine since 2011. HIs writing has also appeared in Sound & Communications, LF Examiner, Jim Hill Media, and MiceChat. His blog, ThemedReality.com takes an unconventional look at the attractions industry. Follow on twitter @ThemesRenewed Joe lives in Sacramento, California with his fiancé, two dogs, and a ghost.
Share
Facebook
Twitter
Linkedin
Email
Print
WhatsApp
Pinterest
ReddIt
Tumblr
Previous articlePANASONIC+APPLE+VIDERO: The magical mobile media tour
Next articleBROGENT TECHNOLOGIES: Project V