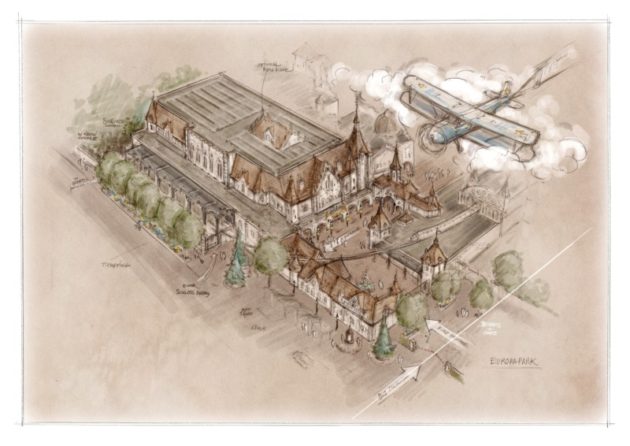 With the big operators leading the way, media-based attractions are everywhere in North American parks, and growing quickly in Asia. But in Europe, such attractions are proportionately fewer and the primary innovation drivers tend to be smaller operators, such as family-owned Europa-Park in Rust, Germany, which will open Project V next year. (The “Vee” represents an abstraction of birds’ wings.)

The contrast from one continent to another is significant. In the Americas, Six Flags parks have been adding new, media-based interactive dark rides based on the Justice League IP. VR Coaster rides have also become part of the Six Flags experience. In its parks, the Cedar Fair chain has introduced new media-based, immersive experiences based on popular video games such as Mass Effect. 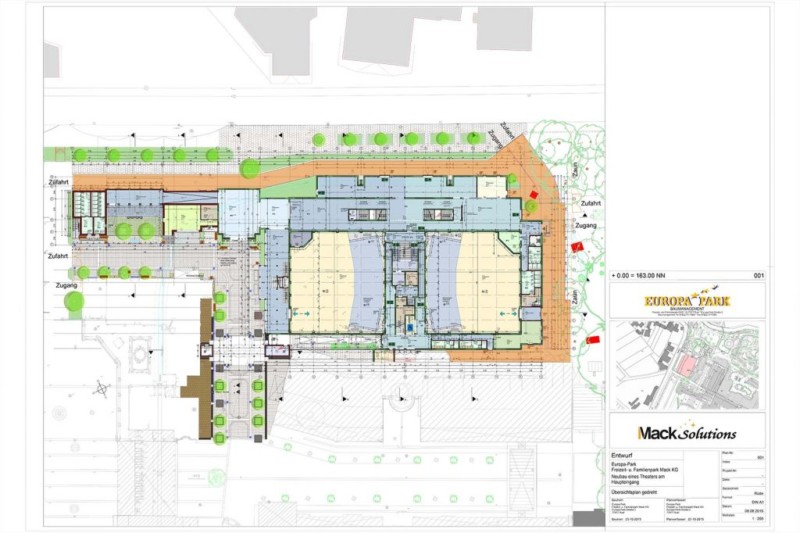 For their part, Universal and Disney both doubled down on the usage of projection technology in their rides for the 2016 season, including “Pirates of the Caribbean: Battle for the Sunken Treasure” at the new Disney Shanghai and “Skull Island: Reign of Kong” at Universal Studios Florida.

China’s theme park developers like to compare their offerings with the Western market leaders and therefore media-based attractions are an important ride type in each new development. Chimelong Ocean Kingdom features the world’s largest 4D cinema and Wanda and Fantawild have flying theaters, which are inherently media-based, as standard rides in all their parks ride portfolios.

Due to the hot climate in Southeast Asia as well as in the Middle East, indoor attractions are often more popular than their outdoor counterparts and media-based rides are a natural choice.

When it comes to media-based rides, Europe, in our view, is still lagging behind. Having no Universal Studios park, the continent lacks an operator that elsewhere in the world is a major driver for media-based attraction development. Attractions such as “Terminator 2: 3D,” “The Amazing Adventures of Spider-Man,” “Transformers: The Ride” and “The Wizarding World of Harry Potter,” all major milestones in media-based attractions history in the US and Asia, are not available to the theme park audience in Europe. For its part, Disney seems to be very selective about adding high-tech, media-based rides to Disneyland Paris. “Ratatouille” is one of the few instances; an attraction based on this Pixar movie would have been too good a fit for France to miss. But other Disney media-based attractions, such as “Toy Story Mania” and “Soarin’” are still US/Asia exclusives.

It may be that traditional, European amusement parks tend to stay away from media-based attractions due to a guest preference for outdoor activities. By their very nature, media-based attractions are indoor events. A significant exception is Futuroscope, a French park that has been a showcase of specialty cinema from its early days in the late 1980s, offering unique, media-based attractions even before the term was invented. Several pioneering cinema systems first seen at world expos are preserved at Futuroscope; but the park continues to innovate and broaden its family appeal with unique 4D experiences such as Time Machine.

This relative lack of media-based guest experiences in European parks creates opportunity for operators to move into the territory. And Southern Germany’s Europa-Park has begun to do so, introducing attractions that combine storytelling and new technology into the old continent’s theme park industry. Europa-Park can proudly claim the world’s first VR coaster – the Alpenexpress – which quickly began a worldwide trend. The park’s own library of 3D movies was the driving force. And now, Project V.

Despite all this technology usage, Europa-Park is not over-saturated with media. It is not turning into a video arcade or technology showcase; it is maintaining a balance. For instance, Ireland, the new area for 2016, puts a strong emphasis on nature and active play. 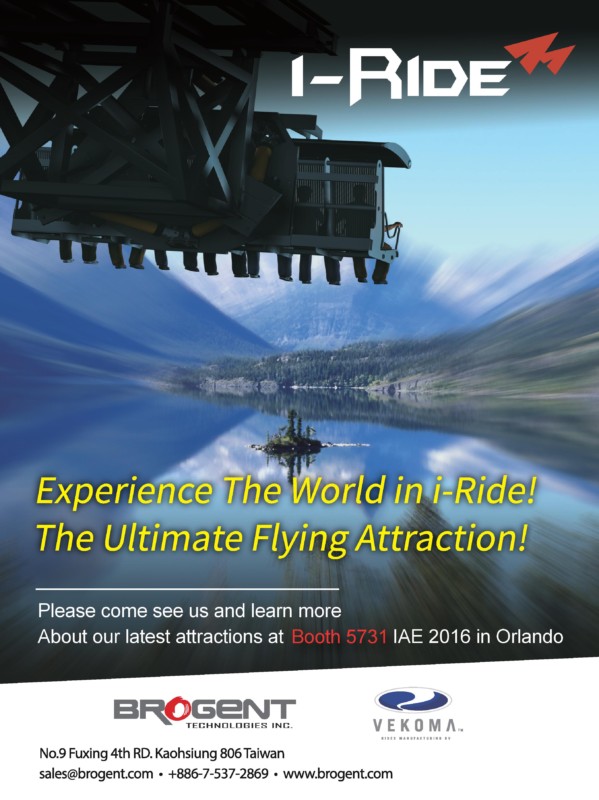 The year 2017 will once again push the boundaries for media-based attraction technology in Europe with the opening of Project V. This new, flying theater experience at Europa-Park is being created collaboratively with our company – Taiwanese ride system manufacturer Brogent Technologies – plus Austrian AV experts Kraftwerk Living Technologies, as well as Mack Media for ride film production.

Project V was recently announced during the 2016 IAAPA Euro Attractions Show in Barcelona. More details have since been revealed. It will be located in the German zone of Europa-Park, just next to the Main Street. It will be a double installation with two 70-seat theaters, and be ranked as the largest flying theater installation in Europe.

Europa-Park’s own creative arm, Mack Solutions, is in charge of developing the background story – as well as integrating into the park the huge, 4,800-square-meter building that will house the attraction, including two giant dome screens and the sophisticated ride system. Project V will be a key attraction, positioned near the main entrance and helping lay the storytelling foundation for a day at the park.

Michael Mack, managing partner of Europa-Park and initiator of the project, is confident that putting an even stronger focus on storytelling will add a new dimension to all the rides and attractions at the park, not only to Project V. 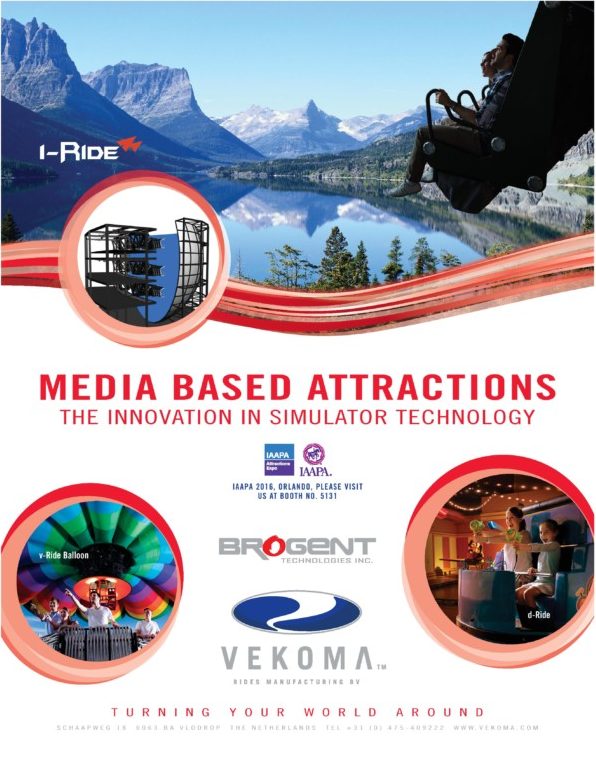 European fans of flying attractions who wanted to experience Brogent’s unique, multi-story, flying theater system have had to travel to the US or Canada to try it out, at FlyOver America at the Mall of America (Minneapolis), or FlyOver Canada at Vancouver’s Canada Place. That will change with the opening of Project V. It will be Brogent’s first European installation of its panoramic flying theater system, that can simulate sophisticated flight paths with six-degree-of-freedom motion base technology, and plunges guests into a media environment projected onto a dome screen.

In our opinion, Project V, as a state-of-the-art, media-based, flying attraction will make Europa-Park competitive with Disneyland Paris, offering a type of guest experience unavailable elsewhere on the continent. We predict this is the spearhead of yet another trend being launched by Europa-Park, which was recently honored with the Golden Ticket Award for World’s Best Theme Park the third time in a row. Ironically, the flying attraction is a genre of ride that Disney pioneered 15 years ago with the first Soarin’ theater at Disney’s California Adventure, and introduced a version of in Shanghai, but hasn’t made available at its European park.

Project V is not only the first installation of Brogent Technologies in Europe, it also marks the entrance of Mack Media into the field of ride film production. The team is currently using helicopters and drones to produce the movie that will debut with the attraction next year. They are filming at 14 locations all over Europe.• • •

Stefan Rothaug ([email protected]) recently joined Taiwanese media-based attractions manufacturer Brogent Technologies in a marketing role. Besides writing as a journalist in our industry for the past 15 years, he has also gathered experience by working part-time for different German theme parks.

Joe Kleimanhttp://wwww.themedreality.com
Raised in San Diego on theme parks, zoos, and IMAX films, InPark's Senior Correspondent Joe Kleiman would expand his childhood loves into two decades as a projectionist and theater director within the giant screen industry. In addition to his work in commercial and museum operations, Joe has volunteered his time to animal husbandry at leading facilities in California and Texas and has played a leading management role for a number of performing arts companies. Joe previously served as News Editor and has remained a contributing author to InPark Magazine since 2011. HIs writing has also appeared in Sound & Communications, LF Examiner, Jim Hill Media, The Planetarian, Behind the Thrills, and MiceChat His blog, ThemedReality.com takes an unconventional look at the attractions industry. Follow on twitter @ThemesRenewed Joe lives in Sacramento, California with his wife, dog, and a ghost.
Share
Facebook
Twitter
Linkedin
Email
Print
WhatsApp
Pinterest
ReddIt
Tumblr
Previous articleOCEANEERING: Under the Hood
Next articleDYNAMIC ATTRACTIONS: Show. Ride. Integration.