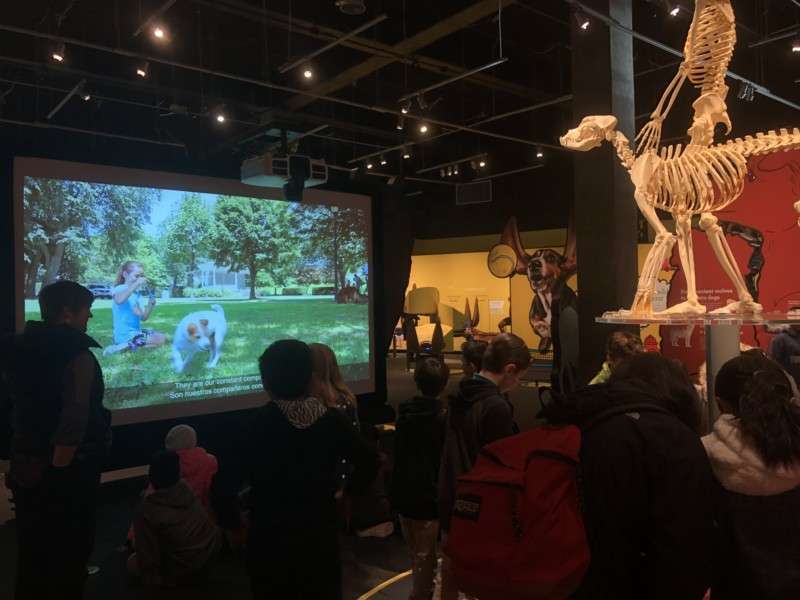 They’re cute. They’re smart, and some of their senses are superpowered. Dogs! A Science Tail, the newest exhibition at the California Science Center in Los Angeles, immerses guests in interactive media dedicated to all things canine. Unified Field created all the of digital interactives, linear media films, and immersive experiences that allow guests to see like a dog, hear like a dog, run like a dog and much more. The entire exhibition is ADA accessible and bilingual with text and audio in both English and Spanish.

In Be a Dog Scientist, Unified Field created a virtual laboratory with neuroscientist, and New York Times Bestselling author, Dr. Gregory Berns, where guests recreate his dog MRI studies. Alex Trebark, makes an appearance in Jeopawdy, a dog themed three player interactive game of Jeopardy. But the puppy love doesn’t end there, the Dog Crowdsourcing wall invites visitors to upload photos and videos of their favorite pooch, while another experience allows guests to interact and bond with a life-sized virtual dog.

Unified Field created 17 linear media films for Dogs! A Science Tail. The intro film, From Predator to Pooch: Dog Evolution, explores the 10,000-year-old bond between humans and dogs. The film is packed with original and sourced footage, original animations and 3D models all created by Unified Field. The short film, Dog Infomercial, spoofs both a pharmaceutical commercial and an infomercial extolling the health benefits inherent in relationships between dogs and humans.

Closer to the ground, See Like a Dog takes guests on a dog’s eye tour of the world. United Field constructed a dog-cam and shot footage from Times Square to the Hollywood Walk of Fame. A favorite with guests, they put their own heads inside of a sculpted dog head and see the projected video through special lenses that manipulate the color spectrum to complete doggy vision.

Unified Field shot and produced several documentary shorts including the Future of Dogs and Partners with Paws. The Future of Dogs explores the work of dog scientists at Emory University, Georgia Tech, and NC State. Another video and interactive kiosk details the Nation’s largest provider of service dogs, Canine Companions for Independence, an organization that teaches dogs to flip on light switches, answer phones and complete transactions for the disabled.

Unified Field could not have created the interactives without its partners. The California Science Center team worked as close collaborators throughout the project. The talented design firm, Evidence Design, planned, conceptualized and designed the exhibit. Unified Field chose the Dawn Animal Agency, suppliers of the top dogs and trainers in show business for its doggy actors. The pups have stared in Broadway shows, Netflix series, and national commercials. The bilingual films and interactive media were translated and voiced in English and in Spanish by the Amador family.  The hardware was installed by Electrosonic and the exhibit was fabricated by Pacific Studios. Dog Care Kiosk and Infomercial were shot and cast and created with the assistance of Thursday Shoots and a cast of canine and human actors.

Joe Kleimanhttp://wwww.themedreality.com
Raised in San Diego on theme parks, zoos, and IMAX films, InPark's Senior Correspondent Joe Kleiman would expand his childhood loves into two decades as a projectionist and theater director within the giant screen industry. In addition to his work in commercial and museum operations, Joe has volunteered his time to animal husbandry at leading facilities in California and Texas and has played a leading management role for a number of performing arts companies. Joe previously served as News Editor and has remained a contributing author to InPark Magazine since 2011. HIs writing has also appeared in Sound & Communications, LF Examiner, Jim Hill Media, The Planetarian, Behind the Thrills, and MiceChat His blog, ThemedReality.com takes an unconventional look at the attractions industry. Follow on twitter @ThemesRenewed Joe lives in Sacramento, California with his wife, dog, and a ghost.
Share
Facebook
Twitter
Linkedin
Email
Print
WhatsApp
Pinterest
ReddIt
Tumblr
Previous articleLisa Thorburn of Thorburn Associates among 2019 AVIXA honorees
Next articleDisney’s Hollywood Studios celebrates 30 years of movie magic