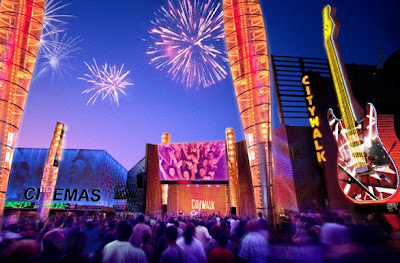 “Kat Graham is one to look out for! She is my pick for breakout musical star of 2012! And this is your chance to see her live before everyone else. And for free! Plus I’m gonna be there too! It will be a blast!” said Perez Hilton, who is championing Kat’s rising star power to the top of the charts and beyond. Kat’s performance will be preceded by a specially produced high-energy showcase set to sample the summer entertainment to be programmed at the “5 Towers” including dueling DJ battles, dance crews stepping and beat thumping to the latest mash-ups of Hip Hop, Top 40 and classic jams synched to a pulsing, rhythm-catching light show, live vocal performances and more.

Universal CityWalk features free, street entertainment every night of the week spotlighting L.A.’s best musicians, guitarists, pianists, and percussionists – many who have performed concerts throughout the world and have been featured on television. This summer, live street entertainment is anchored by themed lineups at “5 Towers” every Friday, Saturday and Sunday with a diverse and eclectic offering of music and artists. Upcoming performances set to heat up the “5 Towers” this summer are as follows:

Joe Kleimanhttp://wwww.themedreality.com
Raised in San Diego on theme parks, zoos, and IMAX films, InPark's Senior Correspondent Joe Kleiman would expand his childhood loves into two decades as a projectionist and theater director within the giant screen industry. In addition to his work in commercial and museum operations, Joe has volunteered his time to animal husbandry at leading facilities in California and Texas and has played a leading management role for a number of performing arts companies. Joe previously served as News Editor and has remained a contributing author to InPark Magazine since 2011. HIs writing has also appeared in Sound & Communications, LF Examiner, Jim Hill Media, The Planetarian, Behind the Thrills, and MiceChat His blog, ThemedReality.com takes an unconventional look at the attractions industry. Follow on twitter @ThemesRenewed Joe lives in Sacramento, California with his wife, dog, and a ghost.
Share
Facebook
Twitter
Linkedin
Email
Print
WhatsApp
Pinterest
ReddIt
Tumblr
Previous articleSix Flags America Welcomes the Apocalypse
Next articleMerlin Entertainments Announces Company’s First Attraction in Canada