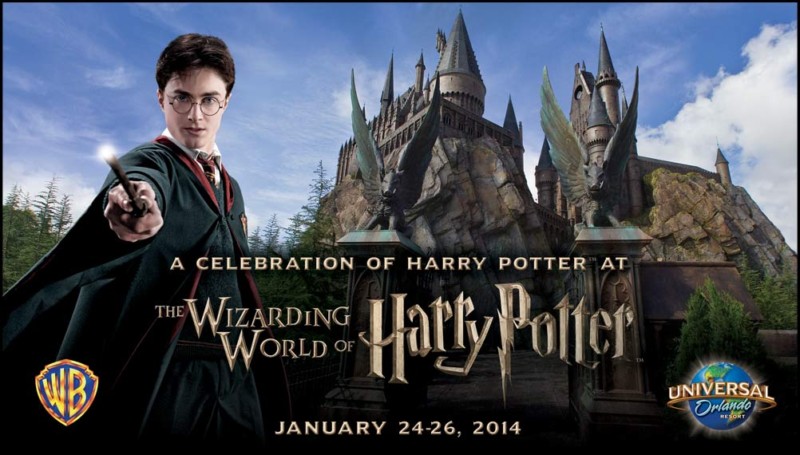 Orlando, FL, USA — Universal Orlando Resort and Warner Bros. have announced that they will host “A Celebration of Harry Potter” – a special event for fans of all ages that will celebrate all of Harry’s adventures, from the beloved books to the Warner Bros. feature films.

Beginning January 24, 2014, fans will enjoy three days of unforgettable experiences – including interactive Q&As with Harry Potter talent and more.  Special event vacation packages will go on sale August 22 and will include exclusive benefits such as access to a private evening reception held in The Wizarding World of Harry Potter.

Guests will have the opportunity to:

Guests will also have access to The Wizarding World of Harry Potter, located in Universal’s Islands of Adventure, where they can soar above Hogwarts on the thrilling attraction, Harry Potter and the Forbidden Journey, sip Butterbeer at the Hog’s Head pub, see a wand choose a wizard in Ollivanders, explore iconic shops like Honeydukes, Zonko’s, and more.

While most of the activities for “A Celebration of Harry Potter” will be open to all Universal Orlando park guests and annual passholders, only guests who purchase the special event package will enjoy exclusive benefits and reserved seating for select events.  Packages are extremely limited and go on sale at noon EST on Thursday, August 22.

Joe Kleimanhttp://wwww.themedreality.com
Raised in San Diego on theme parks, zoos, and IMAX films, Joe Kleiman would expand his childhood loves into two decades as a projectionist and theater director within the giant screen industry. In addition to his work in commercial and museum operations, Joe has volunteered his time to animal husbandry at leading facilities in California and Texas and has played a leading management role for a number of performing arts companies. Joe has been News Editor and contributing author to InPark Magazine since 2011. HIs writing has also appeared in Sound & Communications, LF Examiner, Jim Hill Media, and MiceChat. His blog, ThemedReality.com takes an unconventional look at the attractions industry. Follow on twitter @ThemesRenewed Joe lives in Sacramento, California with his fiancé, two dogs, and a ghost.
Share
Facebook
Twitter
Linkedin
Email
Print
WhatsApp
Pinterest
ReddIt
Tumblr
Previous articleAward Winning Filmmaker Leslie Iwerks Directing Documentary Film on Disney Imagineering
Next articlePixar’s Theme Park Gurus Liz Gazzano and Roger Gould to Speak at SATE’13