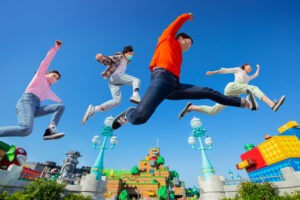 Universal Studios Japan will hold its grand opening of the world’s first SUPER NINTENDO WORLD on March 18, 2021 – bringing to life a highly themed and immersive land featuring Nintendo’s legendary worlds, characters and adventures where guests will be able to play inside their favorite Nintendo games. The grand opening of SUPER NINTENDO WORLD will kick off the park’s year-long 20th Anniversary Celebration.

It also provides guests with an all-new type of “Asobi” play experience where they will jump, punch ? Blocks and collect virtual coins. Guests can purchase a Power-Up Band in the land and sync it to their smartphones to keep track of their score and compete with other park guests. At Key Challenge attractions around the land, guests can collect keys, gather character stamps and more using their entire bodies in dynamic activities. Families and friends will unleash their passion to play in the new SUPER NINTENDO WORLD.