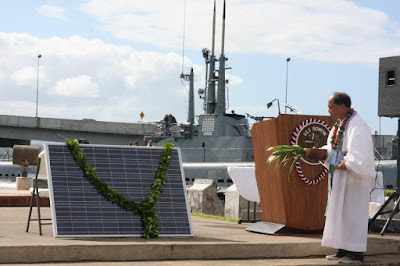 Honolulu, HI, USA /BUSINESS WIRE/ — The USS Bowfin Submarine Museum and Park held a ribbon-cutting ceremony to commemorate the operation of its new 177 kilowatt (kW) roof-mounted solar system. To celebrate the occasion, the museum invited the museum board of directors, partners, contractors, and sub-contractors to the event. Attendees included representatives from Allana Buick & Bers, Hoku Solar, Certified Construction, and Siu’s Electric. In addition, several executives from Hawaiian Electric Company (HECO), and some distinguished Navy individuals were in attendance. The Ceremony included speeches from museum representatives and several of the project contributors as well as a blessing by Kahu (Cordell Kekoa) and then the official activation of the system.

In planning the new visitor center for the USS Arizona and the creation of the Portal to Pearl Harbor, Bowfin began strategically mapping out how to reduce the growing overhead costs, including energy. Partnering with Energy Industries, an analysis of electrical loading showed that major savings could be achieved by first reducing electrical loads and then shifting a portion of electrical production to solar photovoltaic modules placed on the roofs. Allana, Buick and Bers (ABBAE) became the engineering and consulting firm that obtained permitting, arranged a unique project-finance structure for the project to deliver the best possible PPA financing, designed and coordinated the construction of the array by Hoku Solar, as well as performed quality assurance monitoring and commissioning. Naval Facilities Engineering Command-Hawaii provided significant guidance and support to assist in the design and approval process for the installation and the interconnection agreement with HECO. Funding was provided by Kala Capital, LLC to reduce the investment costs for USS Bowfin Submarine Museum and Park.

“This is an amazing feeling not only to be part of this event, but also to be part of the team that made this possible,” says Karim Allana, CEO at ABBAE. “We’re proud to work with the museum and HECO to provide a sustainable energy solution for this historic site.”

“Hoku Solar is very pleased to have been selected to deliver this multi-rooftop, investment-grade PV system for the USS Bowfin Submarine Museum,” said Scott Paul, CEO of Hoku Corporation. “The museum and its visitors will benefit from clean, solar power over the 20-plus year lifetime of the array, and the project gave all of us at Hoku the opportunity to contribute to Hawaii’s military legacy in the best way we know how.”

The USS Bowfin Submarine Museum and Park, home to historic USS Bowfin, is the operational arm of the Pacific Fleet Submarine Memorial Association, a private non-profit organization, chartered in 1978 by the State of Hawaii. The Association was founded to create a lasting memorial to the more than 3,500 submariners on 52 submarines lost during World War II and to educate the visiting public on the high cost of freedom. Its central artifact is the Ex-USS Bowfin (SS-287) which was given to the Association as a part of the Navy’s Donated Ship Program.

USS Bowfin has a rich history, from the days it was active to its 1979 acquisition by a non-profit organization, the Pacific Fleet Submarine Memorial Association (PFSMA), to the time when it was moved to her present day locations at Pearl Harbor, next to Arizona Memorial Visitor Center and became the centerpiece of the new “Bowfin Park.” On April 1, 1981 Bowfin officially begun her new career as a “museum ship,” and welcomed her visitors on board. By 1985, more than one-million visitors had walked on her decks, learning about what life was like for the submariners of WWII. In 1986, Bowfin was named a National Historic Landmark by the U.S. Department of the Interior. In 1987, the Association opened the Submarine Museum and other facilities. Since the opening, nearly seven-million visitors have toured the submarine and seeing the cramped spaces endured by those submarine crews in World War II.

Hoku Solar is one of Hawaii’s oldest, most experienced solar companies specializing in investment-grade solar projects for commercial, industrial and utility users in Hawaii – including large-scale rooftop and ground-mounted photovoltaic (PV) arrays for businesses, institutions and government clients. For more information, visit www.hokucorp.com.

Joe Kleimanhttp://wwww.themedreality.com
Raised in San Diego on theme parks, zoos, and IMAX films, InPark's Senior Correspondent Joe Kleiman would expand his childhood loves into two decades as a projectionist and theater director within the giant screen industry. In addition to his work in commercial and museum operations, Joe has volunteered his time to animal husbandry at leading facilities in California and Texas and has played a leading management role for a number of performing arts companies. Joe previously served as News Editor and has remained a contributing author to InPark Magazine since 2011. HIs writing has also appeared in Sound & Communications, LF Examiner, Jim Hill Media, The Planetarian, Behind the Thrills, and MiceChat His blog, ThemedReality.com takes an unconventional look at the attractions industry. Follow on twitter @ThemesRenewed Joe lives in Sacramento, California with his wife, dog, and a ghost.
Share
Facebook
Twitter
Linkedin
Email
Print
WhatsApp
Pinterest
ReddIt
Tumblr
Previous articleLime Energy Completes LEED Certified Visitor Center Near Branson for Army Corps of Engineers
Next articleDavid Koch Gives $35 Million to Smithsonian for New Dinosaur Hall