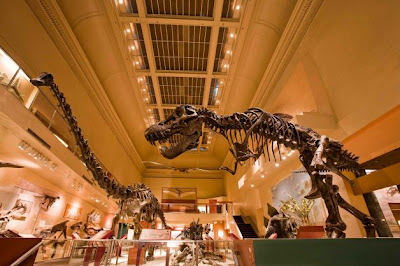 Washington, DC, USA — The National Museum of Natural History has announced that it will construct a new dinosaur exhibition hall made possible by a $35 million donation from David H. Koch, executive vice president of Koch Industries and philanthropist. This renovation—the largest and most complex in the museum’s history—offers an opportunity to showcase the museum’s unrivaled collection of 46 million fossils and present the most up-to-date scientific research possible in the exhibition. Design preparations for the renovation will begin immediately.

The existing dinosaur hall will remain open until spring 2014, when it will be closed to the public to allow construction to begin; selected dinosaur specimens will remain on view in other public areas of the museum.

The Smithsonian Board of Regents approved the naming of the 25,000-square-foot exhibition space April 30 in recognition of Koch’s gift—$35 million of the exhibition’s total estimated cost of $45 million. This is the largest single gift in the history of the Natural History Museum. Koch has contributed to many cultural, educational and health organizations, including Lincoln Center, the Metropolitan Museum of Art, American Museum of Natural History and Massachusetts Institute of Technology. Koch has been a member of the National Museum of Natural History’s board for five years and provided the lead gift for the David H. Koch Hall of Human Origins, which opened in 2010.

“Dinosaurs have always been one of the Smithsonian’s most important and popular exhibitions,” said Cristián Samper, director of the National Museum of Natural History. “The new paleobiology and dinosaur hall will enable us not only to show remarkable fossils, but also to present the latest scientific findings about how life on Earth has evolved.”

“We are grateful to David Koch for this gift that will allow the Smithsonian to update one of the most important and popular exhibitions in the Smithsonian’s National Museum of Natural History,” said Secretary of the Smithsonian Wayne Clough. “Millions of Americans and visitors from all over the world will learn and be inspired for years to come.”

The current dinosaur hall began as “The Hall of Extinct Monsters” when the museum opened in 1910. The museum’s most recent public display of dinosaurs and paleontology has been essentially unchanged for more than 30 years. Although the museum has one of the most comprehensive collections of fossils and a staff of eminent paleobiologists, the exhibition has become outdated because the museum lacked the funding for a total renovation of the space. With this gift, the museum can begin work on a complete overhaul of the exhibition, which has always been a “must-see” destination for families and students visiting the Smithsonian. The new hall will present the fossil record in fresh, new ways to show how dinosaurs and other extinct creatures lived in changing environments.

Renovation of the new hall requires extensive infrastructure work, which will be paid for with federal funds. Crews will later disassemble and conserve the enormous specimens in the exhibit spaces. It is estimated that more than 10,000 bones and other fragile specimens will be removed from the current exhibition before construction begins.

The National Museum of Natural History has an annual federal budget of $68 million in FY 2012, with a professional staff of more than 460 employees. The museum houses 127 million specimens and artifacts—the largest collection at the Smithsonian—and hosts an average of 7 million visitors a year. Its scientists publish approximately 500 scientific research papers every year. Recent renovations of major exhibitions in the museum include the Behring Family Hall of Mammals (2003), the Butterfly Pavilion (2007), the Sant Ocean Hall (2008) and the David H. Koch Hall of Human Origins (2010).

The Smithsonian’s National Museum of Natural History is located at 10th Street and Constitution Avenue N.W. in Washington, D.C. The museum is open daily from 10 a.m. to 5:30 p.m., with extended hours during the summer (until 7:30 p.m.). Admission is free. More information about the exhibition and the museum is available at www.mnh.si.edu,

Joe Kleimanhttp://wwww.themedreality.com
Raised in San Diego on theme parks, zoos, and IMAX films, InPark's Senior Correspondent Joe Kleiman would expand his childhood loves into two decades as a projectionist and theater director within the giant screen industry. In addition to his work in commercial and museum operations, Joe has volunteered his time to animal husbandry at leading facilities in California and Texas and has played a leading management role for a number of performing arts companies. Joe previously served as News Editor and has remained a contributing author to InPark Magazine since 2011. HIs writing has also appeared in Sound & Communications, LF Examiner, Jim Hill Media, The Planetarian, Behind the Thrills, and MiceChat His blog, ThemedReality.com takes an unconventional look at the attractions industry. Follow on twitter @ThemesRenewed Joe lives in Sacramento, California with his wife, dog, and a ghost.
Share
Facebook
Twitter
Linkedin
Email
Print
WhatsApp
Pinterest
ReddIt
Tumblr
Previous articleUSS Bowfin Submarine Museum Goes Solar
Next articleCOPIA Auction Exceeds Expectations