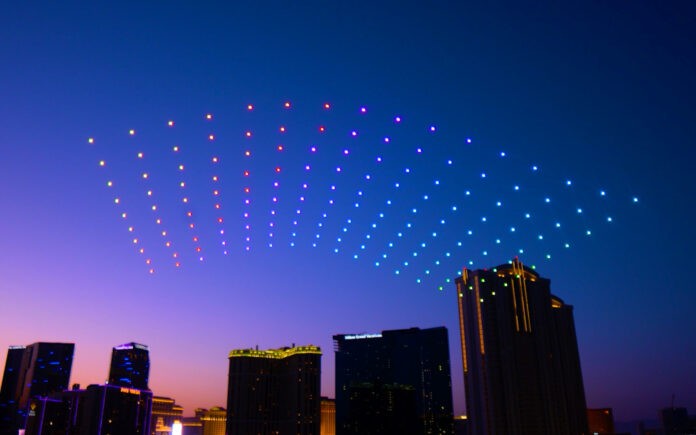 The Verge Aero drone team put on an amazing flying a drone show high above the ballroom right next to Harry Reid International Airport at this year’s Experiential Marketing Summit (EMS) at the MGM Grand Las Vegas.

Taking off from the MGM Grand parking garage – situated just a hundred yards from the airport tarmac – presented the Verge Aero team with a unique challenge. While a focus on safety and precision execution are always part of standard operating procedures, the tight confines of the flight envelope in an urban environment required extreme precision and attention to detail.

“The Experiential Marketing Summit team commissioned us to deliver an on-brand drone show to wow conference delegates, to be flown over the MGM Ballroom roof,” says Verge Aero’s Chris Lutts, who oversaw the project. “We had a tight timeline to design, program and create the show, and some interesting challenges!”

The Verge Aero team worked with the MGM risk management groups and the FAA to ensure all checks and requirements were met. “We certainly dotted all the ‘i’s’ and crossed all the ‘t’s’ with MGM, which is a very large organization!” adds Lutts.

The show design incorporated much of Verge Aero’s content from their performance on the latest season of America’s Got Talent – where they received the coveted Golden Buzzer from Simon Cowell. The EMS team had seen the show and wanted to share it live with EMS attendees.

“We did, of course, have limitations on how many drones could be flown, given the space constraints imposed by the nearby boulevard and airport, but we still managed to design an eye-catching, perfectly choreographed display,” Lutts continues. “We imported logos into our Verge Aero drone show design software and expanded them into a colorful, morphing light show for attendees who watched from poolside at the MGM.”

“The drone show at EMS was one of the highlights of the event – many attendees had never seen a drone light show before so there were a lot of surprised faces, smiles and phones in the air capturing the moment,” says Jon McLoughlin, Director, Event Sales at Experiential Marketing Summit.