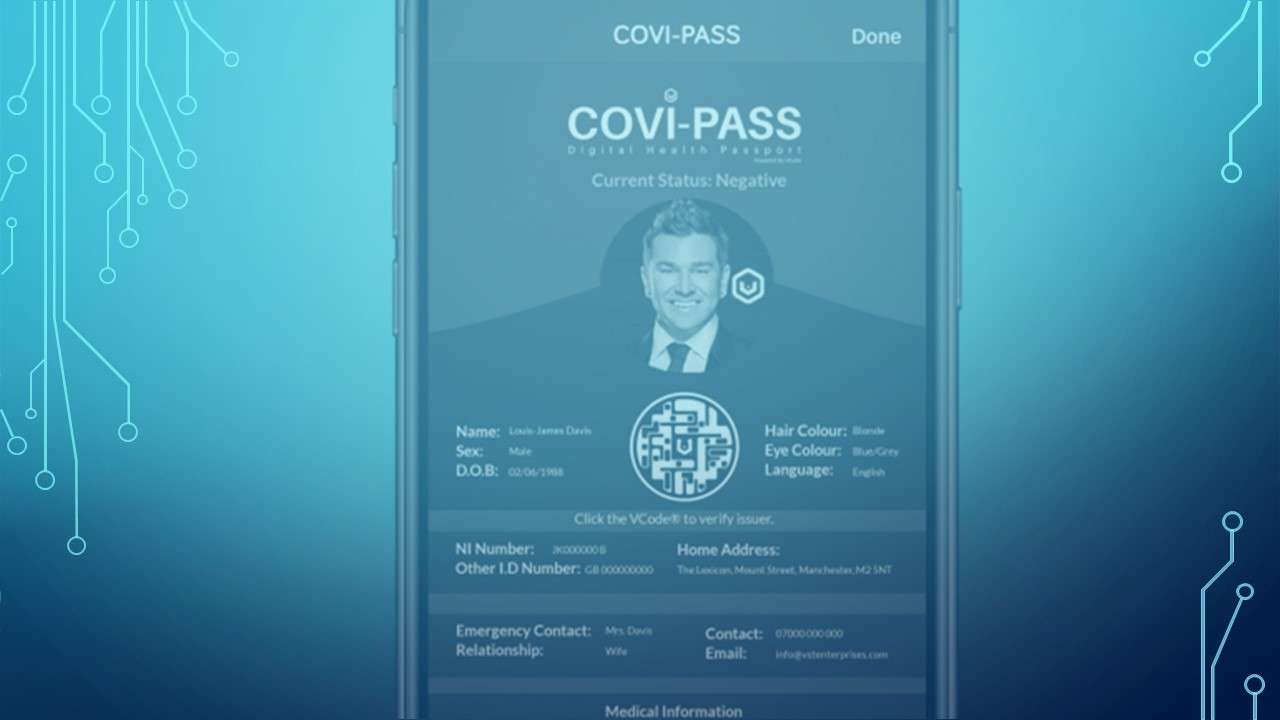 Powered by VST Enterprises groundbreaking cyber security technology VCode® & VPlatform®, Circle Pass Enterprises has contracted with VST Enterprises for a fully secure Digital Health Passport – COVI-PASS™, to be paired with approved testing kits. CPE is to start shipping orders this week for the first phased release of 50M COVI-PASS™ Digital Health Passports to both the private sector and Governments in over 15 countries, including Italy, Portugal, France, Panama, India, the US, Canada, Sweden, Spain, South Africa, Mexico, United Arab Emirates and The Netherlands.

The COVI-PASS™ Digital Health Passport works on an intelligent colour mapping system (green, amber, red) to authenticate and validate a COVID-19 test providing test history and relevant health information. This allows for accurate data metrics to assess those who have tested positive and negative and the location only of their testing. The COVI-PASS™ Digital Health Passport can be used as an authenticated gateway for Public Services, Businesses and Employees to manage a safe return to work, life, and safe travel.

Commenting on the deal VST Enterprises CEO Louis-James Davis said: “We are delighted to be working with CPE to supply our VCode® & VPlatform® technology and Digital Health Passport to create COVI-PASS™. It is also very encouraging that so many Governments and Enterprises across the world are engaging and using the COVI-PASS™ Health Passport and approved testing kits.

We firmly believe that the digital Health Passport alongside Government approved testing kits is the key to removing the lockdown restrictions in a gradual and controlled way. The current technology being trialed using bluetooth and proximity apps is fundamentally flawed because of its privacy issues of real time tracking, the security and data breaches which we are already seeing and being reported and the reticence for citizens to uptake and download the tracing app.”

The Manchester based company are also in advanced discussions with senior UK Government officials, NHSX the technology arm of the NHS and the Home Office about its cyber security technology. The cyber security technology developed by VSTE can be used by various sectors including critical care workers doctors, nurses and health workers in the NHS and blue light emergency services key workers. Using a VCode® integrated with a health passport would help get them back on the front line in a safe and controlled manner.

Circle Pass Enterprises COO and Co Founder Adam Palmer said: “We are delighted to be working with Louis-James Davis and VST Enterprises to utilize the ground breaking cyber security technology of VCode® & VPlatform® to create COVI-PASS™ and to help tackle this global pandemic. One of the many unique features of the VCode® cyber security is that the VCode® technology can be scanned from up to 100 metres ensuring its social distancing compliance is robust and making it the only choice for a safe and secure digital health passport.

We are seeing unprecedented levels of interest from Governments, Businesses and major sporting organisations for the COVI-PASS™ solution. Due to the secure patented technology of the VCode® & VPlatform® – its ease of use and rapid implementation globally across all sectors – it is clear that COVI-PASS™ is the only viable solution for a safe return to work, life and travel protocols. Unlike Bluetooth, QR, or similar proximity apps, COVI-PASS™ using the VCode® & VPlatform® cyber security tech does not violate privacy issues of the user.”

VSTE are also providing its VCode® & VPlatform® technology to work with the UNITED NATIONS as part of their SDG Collaboratory (Sustainable Development Goals) program – to provide a wide range of technology services to 9 Billion people by 2030 and which will be announced in the coming weeks.

VSTE and its partner REDSTRIKE, the sports marketing agency, are also in advanced discussions with major global sporting organisations and regulatory bodies in F1, motorsport, football, rugby, athletics, cycling, golf, tennis and basketball, to use its VCode® technology to help kick start the global sports economy.

•   The user downloads the app to their smartphone device and onboards their key information such as name, address, age and verifies their identity using biometric fingerprint or facial scan.

•   The user then takes the COVID-19 test which is administered by an authorized Health Care Professional, Nurse or Doctor. The test is geo fenced to that location and the test results are then scanned from the testing kit into the COVI-PASS™Health Passport.

•   A traffic light system then confirms their health status as either red or green, red for positive and green for negative. The amber color indicates a countdown timer to when another test would be due and required.

•   The user can then show the COVI-PASS™ health passport to authenticate their health status. The health passport can also be scanned well outside the safe distancing zone of 2/3m (and beyond) while the person is moving and at various angles to ensure continued social distancing guidelines.

VST Enterprises CEO Louis-James Davis added: “The issue at present with other health passports is that not only is the feed of information voluntary, but the technology being used (in most cases a QR code or barcode ) can’t be interacted with outside of the safe distancing zone. Data and sensitive information scanned or stored in either a QR code and barcode can be hacked and are inherently insecure, leaving data and personal details to be compromised. Both barcodes and QR codes are old second generation technology. VCode® & VPlatform® represent the next “third generation” of ultra secure and versatile code technology to military grade encryption with over 2 Quintillion code permutations

The technology used in contact tracing and Bluetooth proximity apps currently being used by various Governments is fundamentally flawed. Not only can the bluetooth app and its data be compromised and hacked, but it can also lead to false flag data. There are also real fundamental issues of privacy, and being tracked in real time which most citizens will resist at all levels. This will also contribute to anxiety about the technology thus resulting in poor uptake. Without 100% uptake of the population using the technology its data is ineffective, and does not give a true picture of the virus tracing. Add into this the fact that bluetooth can also penetrate glass and walls. So someone for example, who is self isolating in a house that has tested positive for COVID-19 would give off a false flag to someone walking past their house who has tested negative, that they had been in proximity to someone who has tested positive.”

Joe Kleimanhttp://wwww.themedreality.com
Raised in San Diego on theme parks, zoos, and IMAX films, InPark's Senior Correspondent Joe Kleiman would expand his childhood loves into two decades as a projectionist and theater director within the giant screen industry. In addition to his work in commercial and museum operations, Joe has volunteered his time to animal husbandry at leading facilities in California and Texas and has played a leading management role for a number of performing arts companies. Joe previously served as News Editor and has remained a contributing author to InPark Magazine since 2011. HIs writing has also appeared in Sound & Communications, LF Examiner, Jim Hill Media, The Planetarian, Behind the Thrills, and MiceChat His blog, ThemedReality.com takes an unconventional look at the attractions industry. Follow on twitter @ThemesRenewed Joe lives in Sacramento, California with his wife, dog, and a ghost.
Share
Facebook
Twitter
Linkedin
Email
Print
WhatsApp
Pinterest
ReddIt
Tumblr
Previous articleInfoComm 2020 Connected brings the professional AV industry show to your home
Next articleEuropa-Park re-opening May 29