Cinematic Experiences For All Ages 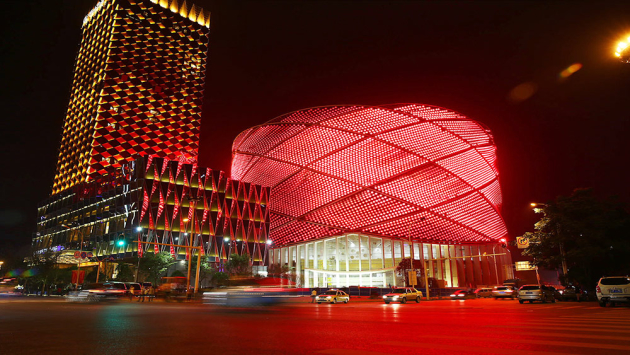 ABOVE: The Han Show theater lights up the entire area. Inside, the lower level of seating parts and swivels to reveal a pool for water acrobatics and diving.

When Dalian Wanda Group announced the launch of 200 Wanda Kids Place children’s “theme parks” in August of 2013, it was one small part in an overall company strategy to make the Wanda brand synonymous with out of home entertainment in China. The 200 centers, when complete, will make Wanda China’s largest operator of commercial play centers targeting children eight years and younger.

On October 31 2014, the 100th Wanda Plaza opened in the city of Kunming. Wanda Plazas combine a high end shopping center, office and residential space, and upscale hotels all on prime downtown real estate. Most of the Wanda Plazas are anchored by a high end Wanda Cinema featuring an IMAX auditorium. With each Wanda Plaza that opens, Wanda Cinemas maintains its bearing as the world’s largest cinema chain, following its 2012 acquisition of AMC Theatres in the United States.

Through sheer number of locations, quality of experience, and inclusion of upscale elements, Wanda plans to make its mark in China and abroad. In the works in the United States are a $226 million investment in a Chicago waterfront tower slated to house residential and commercial units along with a luxury hotel and a $1.2 billion investment in a Beverly Hills project, which will house the company’s American entertainment production offices. In the UK, the $1.1 billion Nine Oaks will bring yet another luxury hotel, housing, and retail, to an area slated to house the US Embassy. In Australia, $900 million will be invested in a hotel which will anchor Wanda’s Jewel project on the Gold Coast.

In China, Wanda is concentrating on cultural tourism. The term, as often used in China, refers less often to the traditional definition of tourism to locations of historical cultural significance, and more significantly to tourist destinations. One such cultural tourism location is Wuhan, the most populous city in central China. As part of its effort to reinvigorate the city center, Wanda built two new attractions, both opening in December, 2014.

The first is The Han Show, created by Franco Dragone with set and building architecture by the late Mark Fisher. In addition to extensive use of projection mapping, the lower tier of seating mechanically separates and relocates to the sides of the auditorium, creating a theater-in-the-round experience surrounding a newly exposed body of water where water acrobatics and diving take place.

Adjacent to the Han Show theater sits Movie Park, also architecturally designed by Fisher, with the park concept devised by Forrec. Within this space are five attractions, with animation and visual effects provided by four of the world’s leading visual effects firms. According to Doug Yellin, a producer on the project, “Walking into the conference room the first time was like walking into a Thea Awards meeting. All the big players were there.”

Each of the attractions is unique unto itself and has its own theme. “Unlike Space Park Bremen, where everything had a central unifying theme,” says Yellin, “Movie Park is more like Futurosocope. Shows can be changed out by switching out the software.”

Movie Park will usher in specialty cinema presentations and technologies that will be novel to most of its guest community. The complex of theaters will offer 4D presentations, interactive cinema experiences, flight simulation and more on an impressive scale. In addition to Yellin’s Mathilda Entertainment, other vendors on the project include Wincomm, Mousetrappe, Rhythm+Hues, and 7thSense Design.

A retail district is tied in to the ground floor of Movie Park. This strategy of combining various components into a single multifaceted destination can be found throughout Wanda’s other cultural tourism destinations under construction. The company is currently developing full scale theme parks, waterparks, indoor ski resorts, and the world’s largest aquarium, all of which will integrate with the next generation of Wanda Plaza. The strategy is simple: be everywhere, be high quality, and be Wanda. Through name recognition and high value, Wanda plans on being the name recognized with the out of home entertainment sector.

Which is why those 200 Wanda Kids Places are so important. Grab them young, get them acclimated to the brand, and keep them for life. It’s a plan that’s worked well for another entertainment company about to open its first park in mainland China. • • •

Joe Kleimanhttp://wwww.themedreality.com
Raised in San Diego on theme parks, zoos, and IMAX films, InPark's Senior Correspondent Joe Kleiman would expand his childhood loves into two decades as a projectionist and theater director within the giant screen industry. In addition to his work in commercial and museum operations, Joe has volunteered his time to animal husbandry at leading facilities in California and Texas and has played a leading management role for a number of performing arts companies. Joe previously served as News Editor and has remained a contributing author to InPark Magazine since 2011. HIs writing has also appeared in Sound & Communications, LF Examiner, Jim Hill Media, The Planetarian, Behind the Thrills, and MiceChat His blog, ThemedReality.com takes an unconventional look at the attractions industry. Follow on twitter @ThemesRenewed Joe lives in Sacramento, California with his wife, dog, and a ghost.
Share
Facebook
Twitter
Linkedin
Email
Print
WhatsApp
Pinterest
ReddIt
Tumblr
Previous articleFinding the “Big Idea”
Next articleIntellectual Property Values