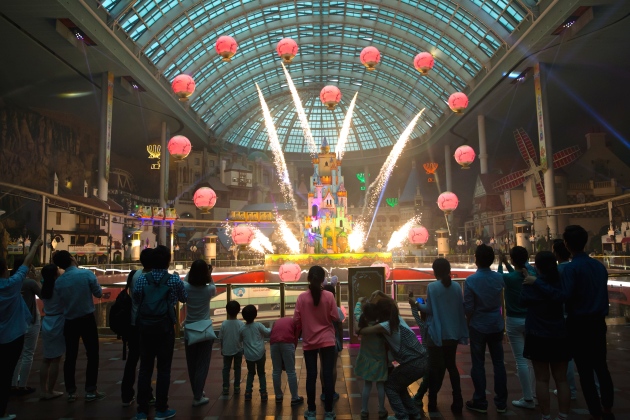 ABOVE: Goddard’s new Let’s Dream! show at Lotte World features the entertainment world’s largest fleet of drones, and is credited with increasing the park’s evening attendance by 35%.

InPark asks Gary Goddard about Chinese urbanization, Central America and how to get started in the industry

Explain to us what you see happening with China and reurbanization projects, some of which you have worked on. What role does themed entertainment play in those developments?

Whenever we’re approached to help create a residential project, we look to contribute something bold and unique that will give it the chance to stand apart from the competition, and ultimately find success for our developer clients. We think the best example of that is Shenfu New Town, an entire new city we were involved in concept design for in 2009. Its 515’ foot Ring of Life monument helped put the city in the news and on the map.

You’ve been known as a company that is often getting in early to new markets and iconic projects. Describe your role in developing these projects and how has that role changed over time?

Getting into a market early tends to have the best results when your clients have existing theme park experience. While it isn’t a rule for use, we tend to lean that way, and it’s made a world of difference. Groups like Haichang, KW Zone, and Hengdian Studios have been a dream to work with, because not only are they excellent seasoned operators, but more importantly, they understand certain realities of designing new parks and attractions.

How has the process of creating a design presentation changed over time?

Digital technology has certainly simplified the act of putting together the actual presentation, and we print it right here inhouse. As for our creative process, that has remained much the same over the years. We get everyone on our creative team involved and make sure all opinions are heard and considered, but that said, one of the reasons our projects have been so consistently successful is that we have a single person, whether it be me or one of my creative directors, driving the vision, just like a director on a film or piece of theater. Nothing great ever comes from consensus, there has to be someone with passion and vision that makes the final call on the key creative, vision, story and staging decisions. 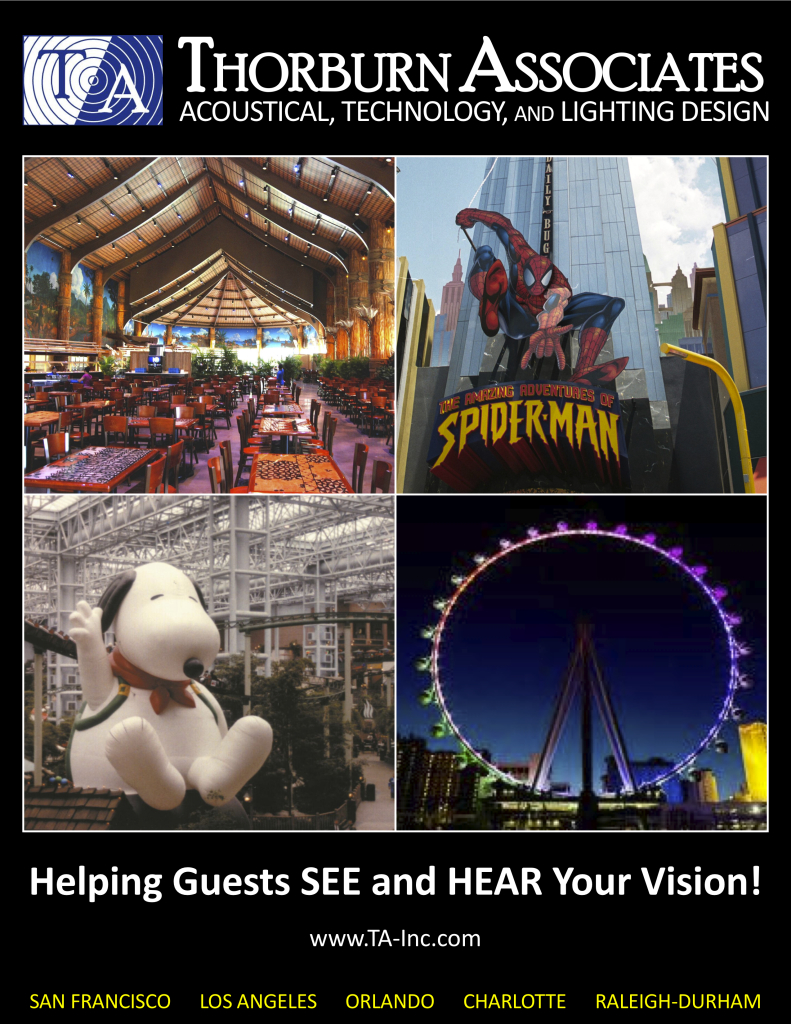 How do you know what the right solution is for a client? Is it an intuition (and if so how do you share that with your other designers) or is there a process?

Each one of our projects begins with the search for the “big idea,” and of course – as I have stated so many times in interviews and in speeches around the world — that’s finding the right idea, at the right time, at the right place, for the right market, for the right budget. To get there, our rule is to generally get beyond the more obvious “easy answer” which means it’s either like something else already in existence and is therefore not unique. We usually throw out the first wave of ideas and push forward until we find something that stands out as different, or surprising, or unique. That’s how we search for “the big idea” – engaging, emotional, immersive and surprising. Other times, we really are working without a net, so to speak. Total invention and redefining some part of the leisure or attraction universe. I love this process the most. It’s a much more challenging process in many ways, but also much more rewarding in the end.

Mexico and Central America are increasingly becoming tourist destinations but themed entertainment seems slow to take root there. Why do you think that is, and do you see evidence of change?

Our team recently made an exploratory trip to South America to take the pulse of the region. What they found is a market ready to explode, but still timid to pull the trigger due to the famous struggles of Hopi Hari and other parks. In countries like Brazil, where there are 200 million consumers hungry for quality entertainment, it’s only a matter of time before you see the development of world-class attractions, but we anticipate it’ll be another five to seven years at least before that’s going to happen. That being said, let’s remember that Walt Disney created Disneyland when the industry experts said “amusement parks are dead…” Walt felt that the market was ready for a new kind of “amusement park” experience, and Disneyland proved that if you respected the audience, and if you gave them something with value, that consumers would react. I think with that huge market in Latin America, when the “Walt Disney” of that part of the world creates a quality park, great success will follow. As for Mexico, at the risk of sounding hyperbolic, we’re working on a few projects that we believe will change the face of themed entertainment in the country and throughout the world. Hopefully we’ll be able to reveal the details in the coming months.

Looking back on your career, what are some of the turning points?

Two things come to mind. First, getting started would have been almost impossible without the generosity of mentors like Al Bertino and Rolly Crump, who referred me to my first jobs with Six Flags and Universal, respectively.

The second is that nothing great happens without a strong advocate. The Forum Shops happened because of Henry Gluck, the Georgia Aquarium happened because of Bernie Marcus, our collaborations at Universal happened because of Jay Stein, and most recently, our eight attractions at Lotte World are a direct result of the support from the President of Lotte World, Dong-woo Lee. So, looking back, it’s clear to me that all the great turning points and great advancements we’ve made over the years have been the result of visionary leaders within our client’s organizations. 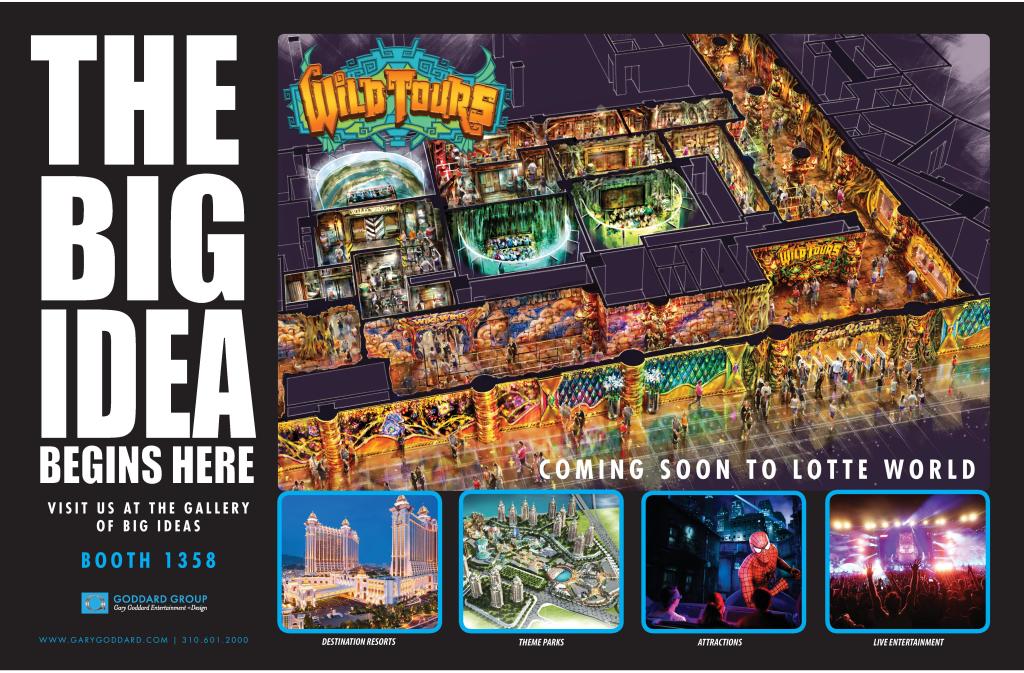 What advice do you have for those young creative individuals looking to start a career in the industry?

Find your passion. If it truly is themed entertainment, then do whatever you need to do to make it happen for yourself. Reach out to your idols, build relationships, set up meetings, hone your skills, and pound the pavement. Get experience and build your value any way you can, even if it involves working for little or no money. And inform yourself by seeing as much of life as you can. Don’t copy existing theme park attractions – instead – find inspiration in theatre, movies, real-world destinations. Learn the foundations for what makes a theme park or attraction work, but then expand and create new ways to surprise and wow the audiences of today. The industry is in the midst of one of its greatest revolutions yet, and if you truly love this medium, now is the opportunity of a lifetime to be part of the future as it unfolds before you. To cite a famous Ray Bradbury quote, “don’t talk about it, DO IT.” • • • 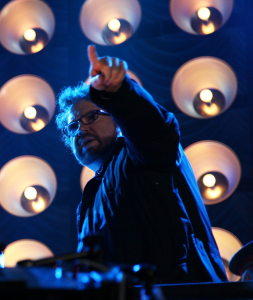 Gary Goddard is known for having helped invent the 3D/4D attraction genre, creating the first major themed retail center, the first interactive live action TV Show, and the most popular integrated casino resorts in the world.

GGE builds upon that legacy creating legendary attractions and resorts for clients including Galaxy Macau, Studio City Macau, Georgia Aquarium, Lotteworld, and are now creating the next generation of theme parks in partnership with Cirque du Soleil.

Joe Kleimanhttp://wwww.themedreality.com
Raised in San Diego on theme parks, zoos, and IMAX films, InPark's Senior Correspondent Joe Kleiman would expand his childhood loves into two decades as a projectionist and theater director within the giant screen industry. In addition to his work in commercial and museum operations, Joe has volunteered his time to animal husbandry at leading facilities in California and Texas and has played a leading management role for a number of performing arts companies. Joe previously served as News Editor and has remained a contributing author to InPark Magazine since 2011. HIs writing has also appeared in Sound & Communications, LF Examiner, Jim Hill Media, The Planetarian, Behind the Thrills, and MiceChat His blog, ThemedReality.com takes an unconventional look at the attractions industry. Follow on twitter @ThemesRenewed Joe lives in Sacramento, California with his wife, dog, and a ghost.
Share
Facebook
Twitter
Linkedin
Email
Print
WhatsApp
Pinterest
ReddIt
Tumblr
Previous articleCurious About Everything
Next articleCinematic Experiences For All Ages