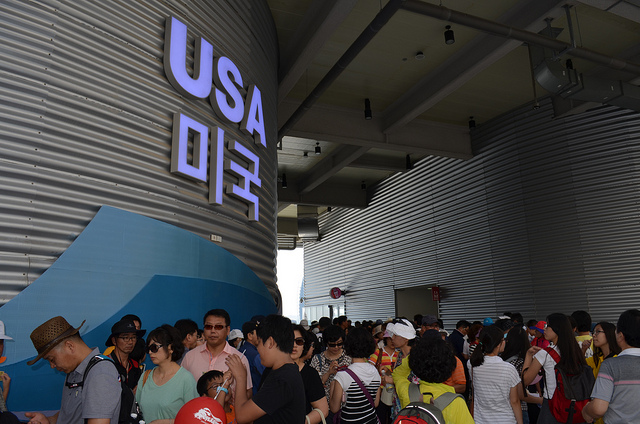 IPM is very happy to bring you this story of US participation confirmed and moving forward for Yeosu Expo 2012. The creative team includes Andrew Snowhite, Robert Ward and The Hettema Group.

Related: Interview with Robert Ward about the USA Pavilion for Yeosu 2012

“Secretary of State Hillary Rodham Clinton today announced that the United States will participate in the Expo 2012 Yeosu Korea during a State Luncheon at the U.S. Department of State in honor of Republic of Korea President Lee Myung-bak. Participation in this Expo demonstrates U.S. commitment to strengthening U.S. – ROK relations and engagement in the Asia-Pacific region and deepens our friendly ties with the people of the Republic of Korea.

“The Secretary noted that the United States is pleased to be participating in the 2012 Expo Yeosu Korea, which will officially open May 12 and run through August 12, 2012. Several million visitors are expected to attend and 108 countries and international organizations are expected to participate.

“The U.S. Department of State is partnering with Cousteau, noted explorer, environmentalist, and social entrepreneur, to manage USA Pavilion 2012 which will showcase the United States’ deep connection to and dependence on the oceans, and the diversity, spirit of entrepreneurship, innovation and commitment to sustainable development of the American people.”

The management team of USA Pavilion 2012 combines a range of experiences from the nonprofit and commercial arenas with a world famous legacy of exploration and environmental stewardship. Members of the creative team headed by Andrew Snowhite include Robert Ward and The Hettema Group.

For more information about the USA Pavilion 2012, visit www.pavilion2012.org.

Judith Rubin
Judith Rubin ([email protected]) is a leading journalist, publicist, strategist, blogger, content marketing specialist and connector in the international attractions industry. She excels at writing about all aspects of design and technical design, production and project management. Areas of special interest include AV integration and show control, lighting design and acoustics, specialty cinema, digital video and world’s fairs. Judith has ties to numerous industry organizations. From 2005-2020 she ran communications, publications and social media for the Themed Entertainment Association (TEA). In 2013, she was honored with the TEA Service Award. She was development director of IMERSA, and co-chair of the 2014 IMERSA Summit. She was publicist for the Large Format Cinema Association in the 1990s, now part of the Giant Screen Cinema Association (GSCA) and has also contributed to the publications of PLASA, IAAPA and the International Planetarium Society. Already making her mark as a magazine and book editor, Judith joined World’s Fair magazine in 1987, which introduced her to the attractions industry. Launching as a freelancer in the mid 1990s she has contributed to dozens of publications and media outlets including Funworld, Lighting&Sound America, Sound & Communications, Urban Land, The Raconteur and The Planetarian. She joined InPark in 2010. Judith earned a Bachelor of Fine Arts from Pratt Institute. She has lived in New York City and the San Francisco Bay Area, and now makes her home in Saint Louis, where she is active in the local arts and theater community.
Share
Facebook
Twitter
Linkedin
Email
Print
WhatsApp
Pinterest
ReddIt
Tumblr
Previous articleNew Polar Land opening 2012 at LEGOLAND® Billund will integrate drop roller coaster with live penguin display
Next articleWe are "The Thing" – You will be assimilated (Halloween Horror Nights at Universal Studios Hollywoods) – video