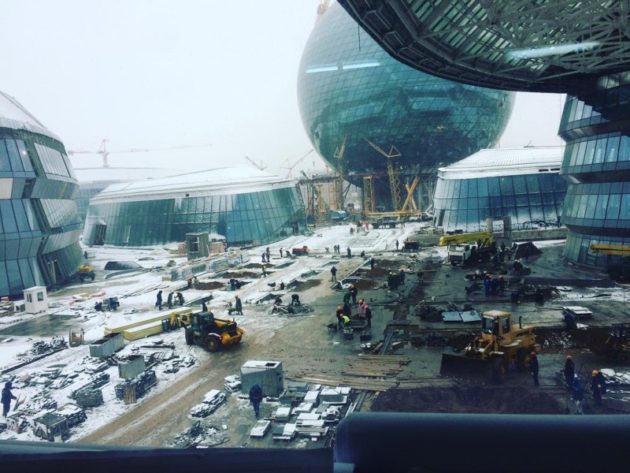 Astana and Dubai, like all world’s fairs, require major lead-time preparations. At Astana construction has been under way for the past few years; organizers report that the process is on schedule and 85 percent complete. Participants, including 103 countries and 17 international organizations, will be able to enter the International Building and begin construction of their exhibits at the end of this month. The smaller, three-month expos provide a building to house exhibits and lease the space to participants; it is at the larger, six-month expos that one sees unique pavilions designed and built by individual exhibitors. 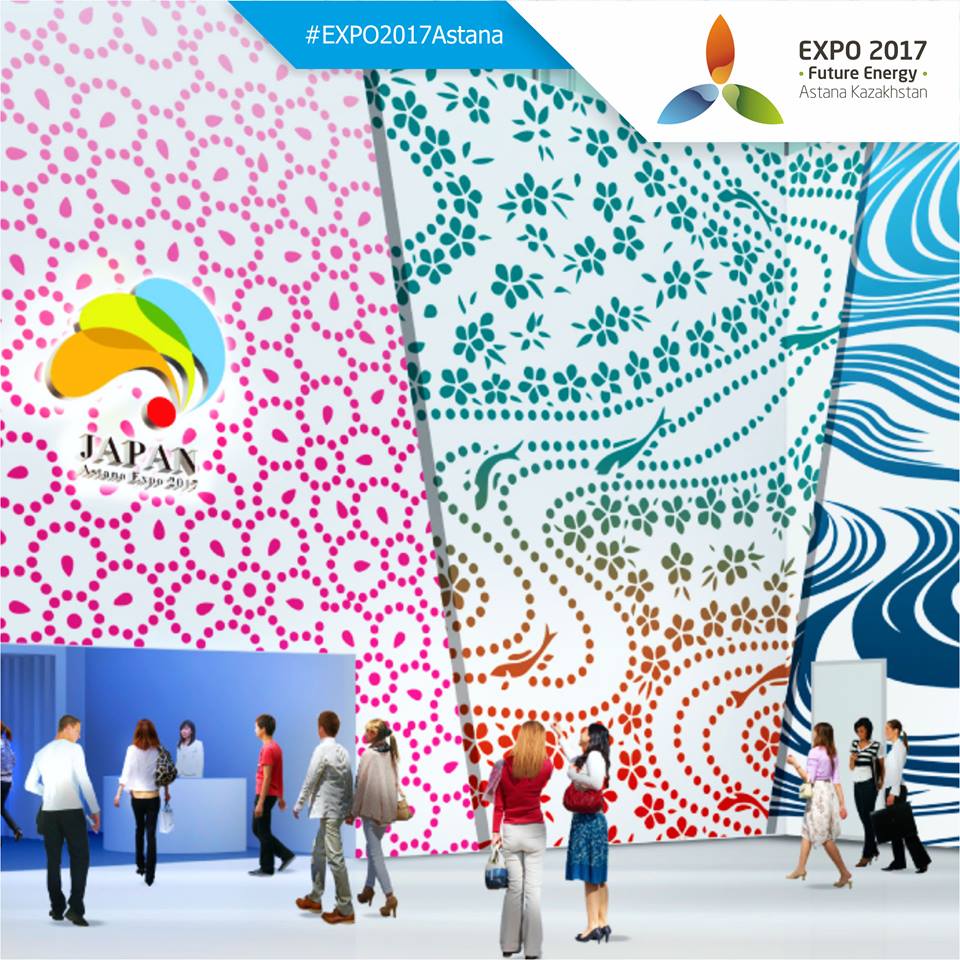 At Dubai, it’s all about infrastructure at this time. A $2.8 billion spur for its metro system is under construction that will bring visitors to the Expo site from Nakheel Harbour in 16 minutes. In addition to bringing visitors to the fair, it will serve a metro area with a commuter population of 270,000.

Dubai organizers report that the site will have a large percentage of buildings ready by the end of 2019. This will allow trial events to take place prior to opening day. By early 2017, work is scheduled to begin on the main buildings, including the Al Wasl Plaza and the UAE’s three main theme pavilions.

For both Expos residual use is integral to planning. At Astana the site will be repurposed as the Astana International Financial Center. The plan for Dubai is that 90% of the infrastructure will be retained and utilized after closing day. Under this plan, the expo’s conference and exhibition center will become an event venue operated by Dubai World Trade Centre, while more than 200,000 square meters of nations’ pavilions will also be reused as collaborative work spaces for companies and institutions. Two of the UAE’s three theme pavilions will be converted into learning centers, with the Mobility Pavilion becoming an educational institution focused on logistics and the Sustainability Pavilion becoming a science center. It is estimated that by this method, 80 percent of Expo investments will be retained. 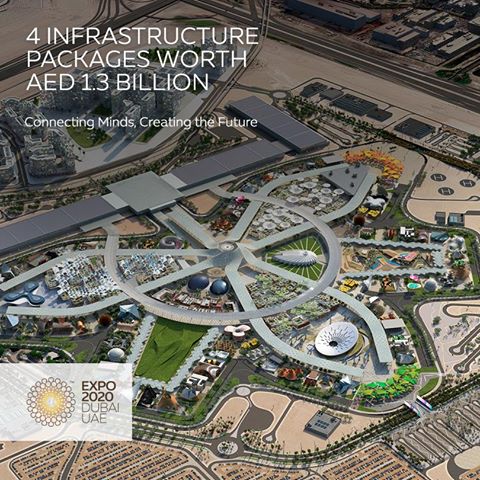 In order to boost international attendance at Astana Expo 2017, Kazakhstan will provide visa-free entry for citizens of 20 developed countries and beginning in 2017, a visa-free regime (up to 30 days) will begin for citizens of all members of the Organization for Economic Cooperation and Development (OECD) as well as Malaysia, Monaco, Singapore and the United Arab Emirates.

The U.S has not hosted a world’s fair in 32 years but that may change in the near future, as Minnesota has submitted a bid to host a smaller scale Expo in 2023. It will be competing against Lodz, Poland, which already has its bid in for 2022. The Minnesota effort has been dual-pronged as it not only had to develop a comprehensive plan to be approved by the Department of Commerce and ultimately by the Bureau of International Expositions (BIE), but also had to mount an effort for the U.S. to reinstate its lapsed membership in the BIE – such membership being a prerequisite to winning a bid to host an Expo. 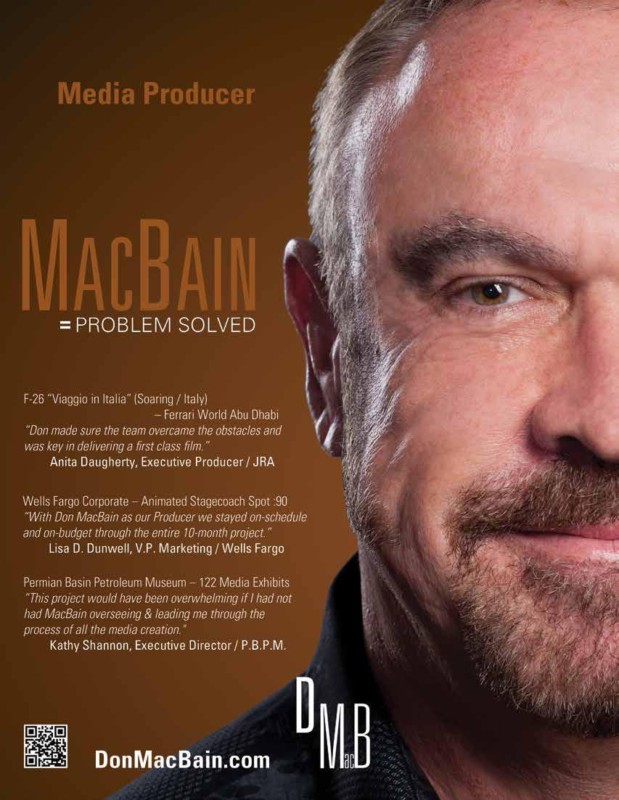 That effort has now resulted in H.R. 5624 – a Bill that states, “To require the Secretary of State to take such actions as may be necessary for the United States to rejoin the Bureau of International Expositions, and for other purposes.”

Beyond the 2022-2023 competition, the year 2025 has attracted bid interest from Toronto, Paris, Rotterdam, Greater Manchester, UK, Osaka, Japan, San Francisco and Houston. Each potential bidder is working with community and government elements to rally support for bids.

World’s fairs, which have a history going back to 1851 (Crystal Palace exhibition, London) have a busy future. The 150 million people who have attended them so far this century will be augmented by millions more in the decades ahead.• • •

Since retiring from the US State Department in 2011 after a 30+ year career in world
expos, James Ogul ([email protected]) has remained on the scene in an advisory and consulting role. He writes regularly for InPark Magazine about world’s fairs. See his free online book, Tales from the Expo, at www.inparkmagazine.com

Jim Ogulhttps://www.inparkmagazine.com/talesfromtheexpo/
Since retiring from the US State Department in 2011 after a 30+ year career in world expos, James Ogul ([email protected]) has remained on the scene in an advisory and consulting role. He writes regularly for InPark Magazine about world’s fairs. See his free online book, Tales From the Expo.
Share
Facebook
Twitter
Linkedin
Email
Print
WhatsApp
Pinterest
ReddIt
Tumblr
Previous articleTHE PRODUCERS GROUP: Pairs of Aces
Next articleGARNER HOLT PRODUCTONS: The face of animatronics