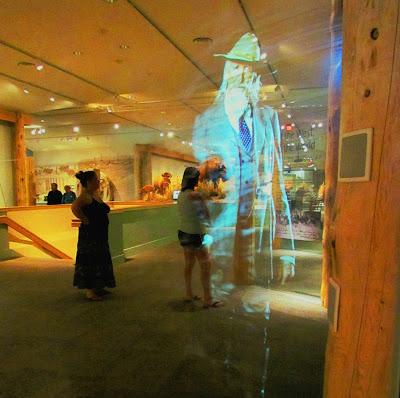 Cody, WY, USA (June 5, 2012) /PRNewswire/ — After six months and millions of dollars in major renovations, the Buffalo Bill Museum—one of five museums within the Buffalo Bill Historical Center located in Cody, Wyoming—will officially re-open just in time for the 2012 summer vacation season. And even as the final pieces are put into place, the venue is already receiving buzz as one of the country’s hottest new tourist attractions. The Center is a short drive from the east gate of Yellowstone National Park.

The new museum delivers a comprehensive view of the life and times of William F. Cody as well as the Buffalo Bill character that helped make him the most popular celebrity of his time. The museum storyline, titled “Man of the West, Man of the World,” takes visitors on an interactive journey that not only showcases the success and fame Cody attained through Buffalo Bill’s Wild West, but also the important impact he made, and continues to make, on the economic, civic, and cultural development of the American West. The museum also reveals the personal struggles that he faced, including a failed marriage and financial troubles that ultimately left him nearly penniless.

Some of the key items on display at the new 15,000-square-foot museum include: a life-size “Heliodisplay” representation of William F. Cody that greets visitors as they enter; Cody’s Congressional Medal of Honor; a stagecoach, costumes, saddles, and guns used by Buffalo Bill and Annie Oakley in Buffalo Bill’s Wild West; the largest known surviving Wild West poster, nearly 28 feet long by 13 feet high, printed in 1888 to commemorate the command performance that Cody and other cast members gave forQueen Victoria and the Royal Family in May 1887; a scale model layout of Buffalo Bill’s Wild West (which, at its zenith, covered 20 acres); and unique personal belongings that shed light on the man behind the Buffalo Bill character.

The new museum also features several state-of-the-art multimedia presentations, including “Buffalo Bill on Stage,” a four-minute animation, adapted from Cody’s own self-deprecating account in his 1879 autobiography, which recounts his improbable rise to stardom, and “Window on the West,” a seven-minute “visual symphony” of landscapes in the American West that William F. Cody knew and loved. In addition to its physical exhibits and displays, the new museum also offers a Web app through which visitors with Smart Phones can access additional information and stories by scanning QR codes.

“In his own time, William F. Cody used every communication medium available to him to present the American West to the world,” said Dr. John C. Rumm, the Center’s curator of Western American History, who oversaw development of the new museum. “We have continued that legacy by creating a museum for the 21st century, using every communication tool at our disposal to enhance the experiences our visitors receive.”

The new museum has quietly piqued the interest of many travel industry insiders that track and rate tourist destinations.

“During the past month, we’ve shared some advance details on the new museum with prominent travel industry opinion leaders,” says Bruce Eldredge, executive director of the Buffalo Bill Historical Center that houses the new museum. “And their initial response has been extremely positive,” he continued. “This is the perfect place to not only experience the life and times of William F. Cody, but to immerse oneself in the American West.”

Among the opinion leaders tracking the Museum’s re-opening is Trekaroo – a leading online travel site that recommends family-friendly destinations. In May, the site ranked the museum as one of the top “Family Friendly Attractions for Summer 2012.” For years, the popular travel site TripAdvisor has also favorably reviewed the Buffalo Bill Historical Center and currently ranks it as the number-one attraction in Cody.

Dr. Rumm believes the venue will not only attract a large portion of the more than three million families who annually visit nearby Yellowstone National Park, but also tourists from around the world who were introduced to the American West by the museum’s namesake.

“It’s ironic but, today Buffalo Bill is more popular in Europe than he is in the United States,” said Rumm. “That’s because he’s such a large part of the curriculum there—far more than in his own country. We hope the new museum not only attracts an international crowd but, as importantly, re-ignites interest in Buffalo Bill here in the U.S.”

The renovation actually marks the fourth iteration of the Buffalo Bill Museum. The museum first opened in 1927 in a log cabin across the street from its current location. It relocated to join the Whitney Gallery of Western Art in 1959 and in 1986, was completely reinstalled.

The Buffalo Bill Museum is one of five world-class museums within the Buffalo Bill Historical Center. Other museums located at the Center include the Draper Museum of Natural History, the Plains Indian Museum, the Whitney Gallery of Western Art, and the Cody Firearms Museum. The Center is also home to the McCracken Research Library, one of the most complete collections of primary materials that chronicle the history of the American West.

Less than a one-hour drive from Yellowstone National Park, the Center celebrates the Spirit of the American West and was recently named as one of the “favorite museums for group travelers” by the National Tour Association.

During the summer months, the Center is open daily 8 a.m. to 6 p.m. More information can be viewed online at www.BBHC.org

Joe Kleimanhttp://wwww.themedreality.com
Raised in San Diego on theme parks, zoos, and IMAX films, InPark's Senior Correspondent Joe Kleiman would expand his childhood loves into two decades as a projectionist and theater director within the giant screen industry. In addition to his work in commercial and museum operations, Joe has volunteered his time to animal husbandry at leading facilities in California and Texas and has played a leading management role for a number of performing arts companies. Joe previously served as News Editor and has remained a contributing author to InPark Magazine since 2011. HIs writing has also appeared in Sound & Communications, LF Examiner, Jim Hill Media, The Planetarian, Behind the Thrills, and MiceChat His blog, ThemedReality.com takes an unconventional look at the attractions industry. Follow on twitter @ThemesRenewed Joe lives in Sacramento, California with his wife, dog, and a ghost.
Share
Facebook
Twitter
Linkedin
Email
Print
WhatsApp
Pinterest
ReddIt
Tumblr
Previous article45,000 Children Sign Greener World Pledge at KidZania Locations Around the Globe
Next articleNewest Art Exhibit at LACMA is Fully Bonded