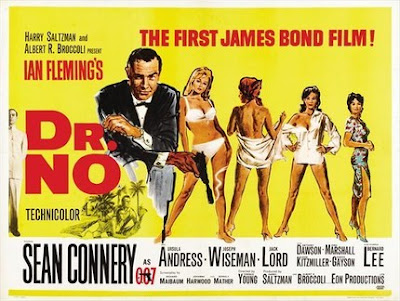 Los Angeles, CA, USA (June 4, 2012) /PRNewswire-USNewswire/ — The Los Angeles County Museum of Art (LACMA) presents …Is James Bond , the first exhibition to feature the complete opening credit sequences from twenty-two James Bond films produced by Eon Productions. Co-organized by LACMA and Loyola Marymount University’s School of Film and Television (SFTV), the exhibition celebrates the fiftieth anniversary of one of the most successful and long-lasting film franchises of all time: James Bond.

SFTV Dean Stephen Ujlaki says, “Bond’s impact on popular culture is immense, from music to fashion and automobiles, and on the business side, the people who advanced the franchise deserve immense credit, among them LMU alumna Barbara Broccoli, and Eon Productions.”

Over the course of fifty years and twenty-two films (soon to be twenty-three with the release of Skyfall), James Bond has gone from Sean Connery to Daniel Craig, from the Soviets to the North Koreans, from M as a man to a woman, from secret nefarious organizations to power-mad tycoons. And while 007 was changing, the opening credit sequence remained constant. “Beginning with Dr. No, the opening credits, created by Maurice Binder, have functioned as pieces of art that comment on the films, while remaining separate from them,” says Elvis Mitchell, curator for Film Independent at LACMA. “The Bond title sequences are a unique and groundbreaking exercise of cinema calculated to resonate as discrete pieces that in no way further the story, but immerse us in the sensibility of 007, filmmaking as daring as the title character.”

Maurice Binder (1925-1991), a film title designer, was best known for his work on fourteen James Bond films. Two sequences in particular are trademarks and staples of the James Bond films: the gun barrel sequence for the opening titles of the first Bond film, Dr. No , released in 1962, and the sequences featuring women performing as dancers, jumping on trampolines, or shooting weapons. Binder was succeeded by Daniel Kleinman as the title designer for 1995’s GoldenEye. Prior to GoldenEye, the only Bond movies Binder did not create the opening title credits for were From Russia with Love (1963) and Goldfinger (1964), both of which were designed by Robert Brownjohn.

The exhibition takes place in the Art of the Americas Building at LACMA. The opening credit sequences are thematically grouped and displayed on a series of 40″ monitors. Audio for each sequence is available via headset, and the full set of sequences are also looped and projected with audio in a large format with sound on one wall of the gallery. LACMA, in partnership with Film Independent, will also screen James Bond double features every Thursday in July and September. A full list of films and times will be posted at lacma.org.

Credit
…Is James Bond was co-organized by the Los Angeles County Museum of Art and Loyola Marymount University’s School of Film and Television. The organizers are grateful for the special collaboration of Danjaq LLC and Metro-Goldwyn-Mayer Studios.

About LMU SFTV
Movie industry titans helped establish Loyola Marymount University’s (LMU) current campus on the bluffs above west Los Angeles in the 1920s. By 1964, LMU was formally teaching film and television curriculum, and in 2001, the School of Film and Television (SFTV) was established as its own entity. Today, SFTV offers students a comprehensive education where mastering technical skills and story is equally important to educating the whole person, including the formation of character and values, meaning and purpose. SFTV offers undergraduate degrees in animation, production, screenwriting, film and television studies and recording arts; and graduate degrees in production, screenwriting and writing and producing for television. The school is one of the few film programs providing students with a completely tapeless model of production and post-production, and SFTV’s animation program is one of the only in the world teaching virtual cinematography. Selected alumni include John Bailey, Bob Beemer, Francie Calfo, Brian Helgeland, Francis Lawrence, Lauren Montgomery, Jack Orman, Van Partible and James Wong, among others. Get more information at sftv.lmu.edu or facebook.com/lmusftv.


About LACMA
Since its inception in 1965, LACMA has been devoted to collecting works of art that span both history and geography and represent Los Angeles’s uniquely diverse population. Today, the museum features particularly strong collections of Asian, Latin American, European, and American art, as well as a contemporary museum on its campus. With this expanded space for contemporary art, innovative collaborations with artists, and an ongoing Transformation project, LACMA is creating a truly modern lens through which to view its rich encyclopedic collection.

Joe Kleimanhttp://wwww.themedreality.com
Raised in San Diego on theme parks, zoos, and IMAX films, InPark's Senior Correspondent Joe Kleiman would expand his childhood loves into two decades as a projectionist and theater director within the giant screen industry. In addition to his work in commercial and museum operations, Joe has volunteered his time to animal husbandry at leading facilities in California and Texas and has played a leading management role for a number of performing arts companies. Joe previously served as News Editor and has remained a contributing author to InPark Magazine since 2011. HIs writing has also appeared in Sound & Communications, LF Examiner, Jim Hill Media, The Planetarian, Behind the Thrills, and MiceChat His blog, ThemedReality.com takes an unconventional look at the attractions industry. Follow on twitter @ThemesRenewed Joe lives in Sacramento, California with his wife, dog, and a ghost.
Share
Facebook
Twitter
Linkedin
Email
Print
WhatsApp
Pinterest
ReddIt
Tumblr
Previous articleWyoming’s Buffalo Bill Museum Reopens in Redesigned Facility
Next articleElectrosonic Founder Robert Simpson to Host Session on High Resolution Displays at InfoComm