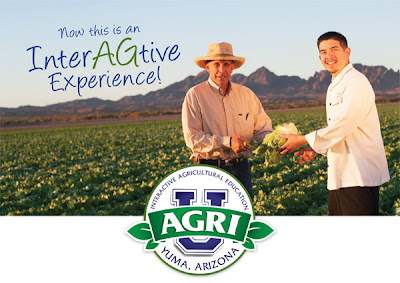 Yuma, AZ /PRWEB/ — Along with vast fields of leafy greens, Yuma’s agritourism offerings are sprouting – and tickets are on sale now for a variety of tours and classes.

Because many think of Arizona as a big, dusty desert, people are surprised to learn Yuma is the nation’s winter vegetable capital. In fact, agriculture is the leading industry here, with its $3.2 billion annual output making up more than a third of the total for the state. But desert farming is a little different … for example, Yuma farmers get annoyed when it rains.

To provide a ground-up look at what makes Yuma agriculture unique, Yuma Visitors Bureau has been growing its agritourism offerings.

Its top crop is the “Field to Feast” tour where visitors start with a food safety lesson and a chance to harvest produce themselves in a field grown just for us at the University of Arizona research farm. Then, while they get a closer look at Yuma’s vast fields, culinary students from Arizona Western College turn their harvest into a farm-fresh lunch. Because nearly every Field to Feast tour sold out the last two years, the 2013 schedule was expanded and now includes three Saturday dates.

YVB also offers “Farmer to Farmer” advanced or technical tours for those with a background in agriculture, and Savor Yuma culinary tours for those whose interest focuses on what’s on the fork rather than what’s in the field.

Just sprouting this year is Agri-U, a five-week program aimed at Yuma’s sun-loving extended-stay visitors that includes 10 classroom sessions, along with a behind-the-scenes “Feed the Nation” field trip and a culinary demonstration class featuring locally grown products supplied by Foxy Produce and prepared with border flair at the charming Tina’s Cocina. Agri-U sessions run Jan. 7-Feb. 9 and Feb. 11-March 15, with an “ala carte” option to opt into any single seminar, field trip or culinary class on a space-available basis (call 72 hours in advance to check for openings).

Putting the focus on food is a crowd-pleaser, says Kristan Sheppeard, YVB’s agritourism consultant and festival organizer. “Not everyone is interested in the horticultural details about how to grow spinach, but most folks love to eat. And if we get them in with that as an ‘appetizer,’ they’ll also end up digesting a lot of information about our local agriculture industry and how important Yuma County is to feeding the nation.”

With rich soil, abundant water and more than 350 days of sunshine a year, Yuma enjoys the country’s longest growing season and is:

Tickets are now on sale for YVB’s ag tours and Agri-U sessions, for more information go to http://www.visityuma.com/yvb_tours.html

Detailed information about Lettuce Days, including schedules and featured chefs and events will be posted as it is available at http://www.yumalettucedays.com.

Through the winter months, Yuma also serves up an array of farmers markets and cooking classes, while local date groves offer the opportunity to sample Medjool dates, the “fruit of kings,” in many forms, including a local favorite, date milkshakes. For more download or browse the Yuma Visitors Guide at http://www.visityuma.com.

Yuma Visitors Bureau markets the Yuma area within the travel and tourism industry and to the general public.

Yuma’s population nearly doubles in the winter months, thanks to more than 23,000 spots in RV parks and resorts. The community also offers nearly 4,300 hotel rooms, conference and meeting facilities, and three casinos. For more details about Yuma’s year-round attractions, special events – and the rarely “cloudy with a chance of tacos” forecast* – visit http://www.visityuma.com.

Joe Kleimanhttp://wwww.themedreality.com
Raised in San Diego on theme parks, zoos, and IMAX films, Joe Kleiman would expand his childhood loves into two decades as a projectionist and theater director within the giant screen industry. In addition to his work in commercial and museum operations, Joe has volunteered his time to animal husbandry at leading facilities in California and Texas and has played a leading management role for a number of performing arts companies. Joe has been News Editor and contributing author to InPark Magazine since 2011. HIs writing has also appeared in Sound & Communications, LF Examiner, Jim Hill Media, and MiceChat. His blog, ThemedReality.com takes an unconventional look at the attractions industry. Follow on twitter @ThemesRenewed Joe lives in Sacramento, California with his fiancé, two dogs, and a ghost.
Share
Facebook
Twitter
Linkedin
Email
Print
WhatsApp
Pinterest
ReddIt
Tumblr
Previous articlePNC Foundation Grant Supports Early Child STEM Education at Tampa’s MOSI
Next articleResorts World Sentosa grand opening, Marine Life Park and the many attractions of Singapore