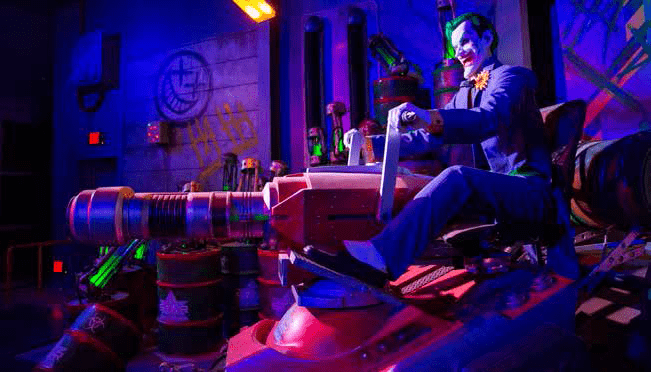 Celebrating its 40th anniversary this year, Sally Corporation has seen (and practically done) it all. They have helped usher in multiple innovations in dark rides. The company got its start during the regional theme park boom of the 1970s and ‘80s. The Sally dark ride catalogue includes interactive, family rides like Scooby Doo’s Ghost Blasters, lavish scenic attractions like Challenge of Tutankhamon, and unique experiences like Nights In White Satin: The Trip (a dark ride themed to the Moody Blues hit song). And with each evolution of the product line, Sally appealed to a new segment of park fans.

ABOVE PHOTO: The Joker waits to blast another vehicle of guests with laughing gas in JUSTICE LEAGUE: Battle for Metropolis.

Sally’s latest success story comes in the development of JUSTICE LEAGUE: Battle for Metropolis for Six Flags parks. The idea had been percolating for over a decade before the first two installations opened at Six Flags Over Texas and Six Flags St. Louis in 2015. In 2017, Sally helped open the seventh installation of the attraction at Six Flags Magic Mountain. It’s an enhanced version of the original with the latest in technology, additional scenes and new characters…and it brings JUSTICE LEAGUE: Battle for Metropolis to Southern California, placing the attraction alongside other dark ride classics near the heart of the industry.

The ride builds on a trend that started in the late ‘90s when destination theme parks began adding high-end, projection-based media dark rides with motion base vehicles. JUSTICE LEAGUE: Battle for Metropolis takes that trend and makes it accessible to parks and populations outside of the major theme park resorts.

The attraction begins in the Hall of Justice where guests learn of their mission to save and release heroes of the JUSTICE LEAGUE who were captured by the Joker and Lex Luthor.

After donning 3D glasses, guests sit in a ride vehicle equipped with “stun blasters” (laser guns) and set out on a ride through Metropolis. Vehicles move through a series of fabricated sets and CG environments where players can shoot at targets both on the screens and in the real environment. The second half of the ride takes place in a series of immersive curved screens designed to cover players’ field of sight. At the end, scores are calculated and displayed, along with a photo of each player taken earlier in the ride – with admiration and thanks from the freed superheroes.

Sally played the lead role of design/build contractor, starting with the conceptualization of the ride package and writing the script, to project management through installation. Sally also assembled a team of experts: Oceaneering Entertainment Systems handled the ride system, Pure Imagination oversaw CGI production, Wyatt Design Group was show set designer, Lexington Design & Fabrication and Forte Specialty Contractors provided scenic construction, and the gaming system was created by Alterface Projects. The collaboration was successful and Sally’s ability to turnkey the project resulted in a happy client and seven installs over a three year period.

Many in the industry have experienced the award-winning dark ride and the reviews are in:

“What’s exciting for us with JUSTICE LEAGUE: Battle for Metropolis here in Southern California is how we broadened our target to compete with the big players here in the theme mecca of the world. We’re kicking it up a notch with a version of this ride that’s hands-down raising the bar.”

“Sally has again innovated the dark ride industry. Who else could turnkey a destination quality dark ride such as JUSTICE LEAGUE on a reasonable, regional theme park budget. That’s pretty innovative.”

“How Six Flags did that was smart: going through R&D with Sally to get that first attraction up, then taking the lessons learned from market to market. What a great attraction for our industry. Sally should be very proud.”

“Sally’s the frontrunner of innovation when it comes to dark rides. They’re one of the iconic, signature companies in our industry. They know how to invest a project budget to deliver the best experience for the guest.”

“There are plenty of others who can do exactly what Sally does, but usually they’ve added a zero or two at the end of the price. It’s mathematically impossible to build an interactive dark ride this good at this price point. Yet Sally does it anyway, proving they’ll always be a great leader or competitor.”

“What Sally’s done well is stay consistent with their quality. As they upgrade technology, they don’t let it take over. Storytelling and characters are still the most important elements. That’s why we see generations of guests coming back, bringing their kids, who then bring their kids. That’s the longevity of a Sally ride.”

“Being able to produce an attraction from soup to nuts is unusual in our industry, and that’s what Sally’s done very well for years. The quality of product coming from them is exceptional. There are a lot of groups interested in working with Sally because of their turnkey approach and because they know Sally will take care of everything.”

“Six Flags has shown this is a dark ride that can be advertised as the main attraction, like a coaster. When you buy a Sally ride, you’ve got a marketable product. Parks all over the world are finding success with dark rides that are taken to Sally’s level of quality and innovation.”

“Regional parks can now enjoy the gate draw, guest satisfaction and ROI that comes with the kind of highquality dark ride experiences that used to be found only in the larger, destination parks. It’s been proven possible by Sally Corporation’s last four decades of work for regional parks around the world.”

For more information on Sally Corporation and their 40th anniverary, visit sallycorp.com. •

Joe Kleimanhttp://wwww.themedreality.com
Raised in San Diego on theme parks, zoos, and IMAX films, InPark's Senior Correspondent Joe Kleiman would expand his childhood loves into two decades as a projectionist and theater director within the giant screen industry. In addition to his work in commercial and museum operations, Joe has volunteered his time to animal husbandry at leading facilities in California and Texas and has played a leading management role for a number of performing arts companies. Joe previously served as News Editor and has remained a contributing author to InPark Magazine since 2011. HIs writing has also appeared in Sound & Communications, LF Examiner, Jim Hill Media, The Planetarian, Behind the Thrills, and MiceChat His blog, ThemedReality.com takes an unconventional look at the attractions industry. Follow on twitter @ThemesRenewed Joe lives in Sacramento, California with his wife, dog, and a ghost.
Share
Facebook
Twitter
Linkedin
Email
Print
WhatsApp
Pinterest
ReddIt
Tumblr
Previous article
Secret Sauce: The Hettema Group
Next article
Specialty projection screens: Strong/MDI and Eclipse Screens